On 11 Seeptember 2022 a catastophic tailings dam failure occurred at the Jagersfontein diamond mine in South Africa.  The location of the tailings facility is 29.772, 25.430.  This is a Google Earth image of the site:- Google Earth image of the Jagersfontein site, including the tailings facility that failed in September 2022.

The Jagersfontein diamond mine is closed.  Bloomberg has reported that the facility is still owned by De Beers, although there is a remarkable lack of clarity:-

The mine’s dumps and slime still “belong” to De Beers and the government’s access has been restricted by a court order, [Nathi] Shabangu [a spokesman the Department of Mineral Resources and Energy] said. “We also have reports that the mine has been sold to other parties, without the involvement of the DMRE as per the court order,” he said.

There are some videos online showing the collapse of the tailings facility, of which is is perhaps the most remarkable:-

Residents of the mining town of Jagersfontein in the Free State are being evacuated after the mine dam burst at around 06:00 on Sunday, 11 September 2022 causing flooding in parts of the town. pic.twitter.com/5p6iTuWin6

Planet Labs captured an image of the aftermath of the failure using their lower resolution PlanetScope instrument.  Unfortunately, and unusually for this area, the image is slightly cloudy but the scale of the failure is clear enough:- 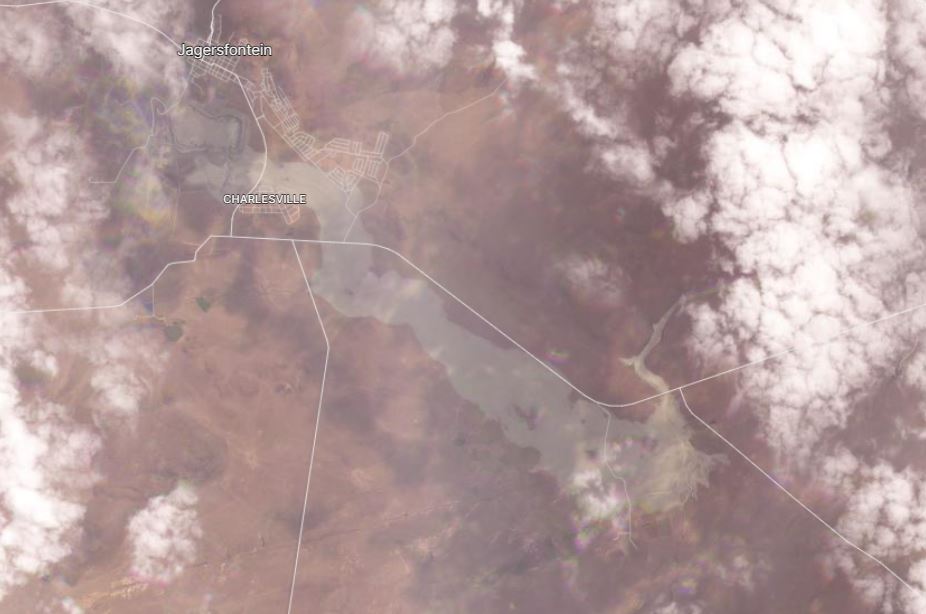 The plume of tailings extends about 8.5 km towards the southeast.  It is up to about 1.5 km wide.

The image below shows the aftermath of the disaster in the area of the tailings facility itself:- The image shows a large breach in the southern wall of the facility.  It appears that the pond, which is about 1 km long and 500 m wide, has largely emptied.  Many houses downstream of the facility have been inundated.

Worryingly, the satellite images also indicate that the tailings have entered the main channel. Frustratingly, this area was covered in cloud at the time of the image collection:- The main channel flows out towards the north, with a small dam creating a lake.  The image above shows the the dam has been overcome, although it is possible that it has retained a substantial volume of the waste.  We will need to wait for better imagery to understand the impact better.

Once again, a major tailings failure has caused loss of life and severe environmental damage.  This event, in a facility in which mining has ceased, will further raise questions about the long term stewardship of these facilities.