The Indian National Remote Sensing Centre has released a new set of images of the Kedarnath area, collected using the RISAT-1 instrument.  These are very high quality images that allow a proper analysis of the events that caused the disaster.  These can be viewed in their excellent GIS system, Bhuvan.  In a post two days ago I suggested that the disaster might have been caused by two different events, first a landslide induced debris from that came from the area of the glacier to the northeast; second a glacial-related flow that came from the glacier to the northeast.  In this post I am going to take a look at each of these.  However, I’ll start with an image of the town itself.  Note that all of the images shown here are taken from the Bhuvan system.  This is the town, showing the flows that have come from the north: The very high level of damage to the town is clearly evident.  Also clear is the two flows:

My interpretation is the that the flow from the northwest occurred after the one from the north-east, based on the juxtaposition of the sediments.  I’ll now take a look at the source of the flow to the northeast.  Upstream the area looks like this: What is clear from this high resolution image is that the debris flow here was initiated by a landslide high on the hillside, which then ran down the slope entraining debris en route.  At the slope toe it was channelized by the glacier into a narrow gully.  It is clear that the flow eroded out a large amount of material is this area.  Upon exiting the channel it spread out across the flood plain before striking the town.  Rough parameters from Google Earth suggest a height difference from the crown of the landslide to the channel below of about 500 metres, and a length of about 1200 metres.  The scar width is about 75 m, I think, so this is a large landslide.  The area downslope of the failure was already a zone of active erosion, so the likelihood of entrainment was very high.

The second event, which came from the glacial area to the northwest, is very different.  This was the area of greatest uncertainty, but the images tell us exactly what happened.  This is the source area of the debris flow: The key area here is the source zone, so I’ve enlarged and annotated this below: 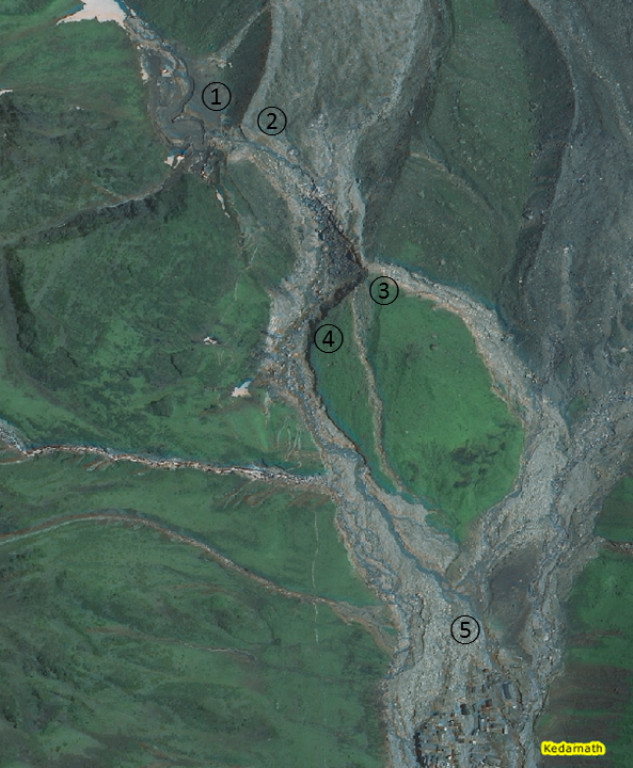 This is my interpretation of what happened in this case – the bullet numbers refer to the numbers on the image above:

It is also worth noting what happened below Kedarnath.  Downstream of the town, the flow was contained within the channel.  As a result there was massive erosion of the riverbanks, as seen in the image below: Compare this with the image (also from Bhuvan) from before the disaster: Although the focus has been on Kedarnath, downstream some of the smaller villages have been utterly destroyed by this event.  This is the village of Rambara before the debris flow: And this is how it looked afterwards: There is nothing left of the village.