For some 12 or so years I have maintained a set of notes on the amazing Vajont (sometimes spelt Vaiont) landslide of N. Italy. This is the most deadly landslide in Europe in recorded history. For a while I have been meaning to move the notes over to here – today I have finally got around to it, so here they are: THE VAJONT LANDSLIDE
Introduction
The Vajont reservoir disaster is a classic example of the consequences of the failure of engineers and geologists to understand the nature of the problem that they were trying to deal with. During the filling of the reservoir a block of approximately 270 million cubic metres detached from one wall and slid into the lake at velocities of up to 30 m/sec (approx. 110 km/h). As a result a wave over topped the dam by 250 m and swept onto the valley below, with the loss of about 2500 lives. Remarkably the dam remained unbroken by the flood.

Location and background
Vajont is located in the south-eastern part of the Dolomite Region of the Italian Alps, about 100 km north of Venice. It was built as a part of the on-going, post-war development of Italy in order to provide HEP for the rapidly-expanding northern cities of Milan, Turin and Modena. Whilst a proposal to site a dam at this location was made in the 1920’s, excavation of the site began in 1956 and the dam was completed in 1960. The completed doubly curved arch dam was, at 265.5 metres above the valley floor, the worlds highest thin arch dam. The chord of the dam was 160 m, and the volume of impounded water was 115 million cubic metres. 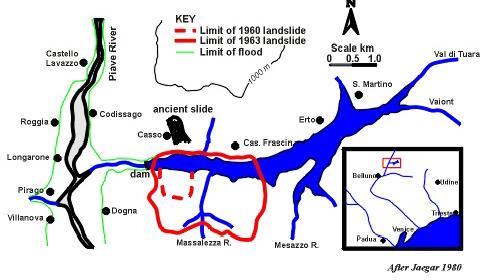 The dam was built across the Vajont Valley, a deep, narrow gorge. The geological setting of the valley was fully understood. In this area, the mountains tend to be characterised by massive, near-vertical cliffs formed in the Jurassic Dogger formation and underlying Triassic formations. The local valleys tend to be associated with outcrops of the weaker formations, particularly the Upper and Lower Cretaceous and Tertiary units, which contain more clays and are more thinly bedded. Thus the generalised geological structure is of a syncline cut by the valley. The syncline is based in middle Jurassic limestone, overlain with successive layers of upper Jurassic limestone with clay and Cretaceous limestones. Order of events
The order of events should be examined in conjunction with this diagram (click on it for a better view in a new window): 1. Prior to the Completion of the Dam
It appears that during the construction of the dam the chief engineer was concerned about the stability of the left bank of the dam, and a number of reports were compiled on this during 1958 and 1959, which identified a possible prehistoric slide on the right bank. Whilst there was considerable discussion of the stability of the valley walls in view of the inclined synclinal form of the strata and the possibility of old slides in this area, it was concluded that deep-seated landslides were extremely unlikely as (see Muller 1964 for a review of this):

Smaller slides in the looser surface layers were considered to be likely, although volumes and velocities of movement were expected to be low.

2. During the First Filling of the Reservoir
Filling was initiated in February 1960, before final completion of the dam (which occurred in September 1960). By March 1960 the level of the reservoir had reached 130 m above the level of the river, when the first small detachment occurred. Continued filling of the reservoir occurred whilst monitoring of the movements in the banks was undertaken. In October 1960, when the depth of the reservoir had reached 170 metres, a rapid increase in the rate of displacement to approximately 3.5 cm/day was observed. At the same time a huge joint of 2 km length opened up, defining an area about 1700 m long and 1000 m wide, suggesting that a very large landslide had been mobilised. This is the crack: On 4th November, with the depth of the reservoir at 180 m, a large failure occurred when 700,000 cubic metres of material slid into the lake in about ten minutes. As a result the level of the reservoir was gently dropped back to 135 m. At this point movement reduced to close to 1 mm/day. This is the 1960 failure: It was realised by the designers of the dam that the large mass of the left bank was inherently unstable. However Muller (1964) stated that:

‘It appeared hopeless to arrest the slide artificially, because all means that would have had to be applied were beyond human bounds. It was also impossible to either seal the surface of the area, to shift the weight or to cement the rock by means of
injections. On the other hand the possibility of accelerating the sliding movement in order to let the entire mass to slide down all at once had to be excluded. The danger arising for the formation upstream of the slide by an uncontrollable level of the storage lake would have been too great.’

Thus it was decided that an attempt could be made to gain control of the sliding mass by varying the level of water in the reservoir whilst controlling the joint water thrust within the rock mass by means of drainage tunnels. It was realised that this could lead to the blockage of that section of the reservoir by the landslide mass. However the volume of water in the unblocked (upstream) section would still be sufficient to allow the generation of electricity. Hence a bypass tunnel was constructed on the opposite (right) bank such that if the reservoir was divided into two sections the level of the lake could still be controlled.

It was assumed that by elevating the level of the reservoir in a careful manner movement of the large landslide mass could be initiated. The rate of movement could be controlled by altering the level of the lake. It was realised that a final sudden movement might occur, and it was calculated that, so long as the movement did not exceed a rate that would lead to filling of the reservoir by the landslide in ten minutes or less, over-topping of the dam would be avoided.

3. First Draw-Down of the Reservoir
Creep had been initiated by the initial filling of the reservoir. As the level was subsequently drawn down, rates of movement decreased from a maximum of about 8 cm/day to 3 mm/day at a level of 185 m and less than 1 mm/day at 135 m. By this time the main landslide mass had moved an average of about 1 m.

4. Second Filling of the Reservoir
From the beginning of October 1961 through to early February 1962 the water level was raised to 185 m, followed by a phase of slow impoundment such that in November 1962 the level had reached 235 m. During the early part of this phase velocities did not substantially increase, but by the end of the phase velocities had increased to 1.2 cm/day.

5. Second Draw-Down of the Reservoir
In November 1962 a second lowering of the level was slowly undertaken, with the water depth decreasing to 185 m after four months. Initially displacements remained high but in December they began to reduce and, by early April when the water height had reached 185 m, the rate was effectively zero. The experiences gained from the second phase of filling and the subsequent draw-down confirmed to the engineers that control of the landslide was possible by altering the level of the reservoir. In consequence a third filling of the reservoir was undertaken.

7. Third Drawing Down of the Reservoir
In late September the water level was slowly dropped to bring the rates of creep back under control. By 9th October a depth of 235 m was reached. However velocities of movement continued to slowly increase, and rates of up to 20 cm/day were recorded.

8. Catastrophic Failure
At 22:38 GMT on 9th October 1963 catastrophic failure of the landslide occurred on the slope shown below. The entire mass slid approximately 500 m northwards at up to 30 m/sec. The mass completely blocked the gorge to a depth of up to 400m , and it travelled up to 140 m up the opposite bank. Movement of the landslide mass ceased after a maximum of 45 sec. At the time the reservoir contained 115 million cubic metres of water. A wave of water was pushed up the opposite bank and destroyed the village of Casso, 260 m above lake level before over-topping the dam by up to 245 m. The water, estimated to have had a volume of about 30 million cubic metres, then fell more than 500 m onto the villages of Longarone, Pirago, Villanova, Rivalta and Fae, totally decimating them. A total 2500 lives were lost. The image below shows the location of these villages after the flood. The valley floor, on which the villages were located, has been wiped clean by the water. The flood wave came down the Vajont valley, which can be seen in the upper right of the image: However the dam was not destroyed and is still standing today. The by-pass tunnel is used for the generation of HEP.

Causes of the landslide
Since the catastrophic failure, a huge range of work has been undertaken on the causes of the failure. Initially the was a large amount of speculation about the location of the sliding surface, but more recent studies have confirmed that it was located in thin (5 – 15 cm) clay layers in the limestone. It is claimed by some that as such it represents a reactivation of an old landslide (Hendron and Patten, 1985; Pasuto and Soldati, 1991), whilst others claim that it was a first-time movement (Skempton, 1966; Petley, 1996). It is likely that increasing the level of the reservoir drove up pore pressures in the clay layers, reducing the effective normal strength and hence the shear resistance. Resistance to movement was created by the chair-like form of the shear surface. Dropping the level of the reservoir induced hydraulic pressures that increased the stresses as water in the jointed limestone tried to drain. It has been estimated that the total thrust from this effect was 2 – 4 million tonnes (!?) (Muller, 1964). Failure occurred in a brittle manner, inducing catastrophic loss of strength. The s
peed of movement is probably the result of frictional heating of the pore water in the clay layers (Voight and Faust, 1982, 1992).

Pasuto, M. and Soldati, A. 1990. ‘Some cases of deep-seated gravitational deformations in the area of Cortina d’Ampezzo (Dolomites)’, The Proceedings of the European Short Course on Applied Geomorphology, 2, 91-104.

Voight, B. and Faust, C. 1992. ‘Frictional heat and strength loss in some rapid landslides: error correction and affirmation of mechanism for the Vaiont landslide’, Geotechnique, 42, 641-643.