The deforming slopes above the Hidroituango dam site. Image via Actualidades.org

In the last 24 hours there have been two interesting developments at the Hidroituango dam site in Colombia.  First, more details have emerged of the incipient landslide that is causing considerable levels of concern.  Lance Brown has kindly highlighted an article that provides details of the ongoing problems (caveated of course with the fact that this is a journalist’s interpretation of the technical details).  The translation of the key parts of the Spanish text notes that:-

“The geological experts who monitor the right mountain of the Hidroituango project 24 hours a day, detected a 6 millimeters per hour detachment this Sunday, according to the report of the Unified Command Post (PMU) installed in Ituango, North of Antioquia.  In this case no evacuation order was given to the workers who work in the dam and the landfill, because the alerts are lit when the movement is higher than 10 millimeters per hour, as happened in recent days.“

The implication is that the landslide is currently in a secondary creep phase, but 6 mm per hour is not trivial.  Detailed monitoring should pick up any acceleration to failure, noting of course that failure is not inevitable.  The article notes that the landslide was first detected on 29th May when:-

“Technicians of the UT company Grupo Líneas Suroccidente conducted an inspection in the mountain to know the conditions of two power transmission towers and after these works, it was known that there is a considerable risk scenario.  This inspection, which was also done with EPM officials on Tuesday, May 29, resulted in a report known to RCN Radio, which argues that one of the towers could come down because “cracks are observed in the rock.”  This authority held that these cracks, known as “saprolitos”, are characterized by the fact that the rock becomes a kind of putty, because of the humidity, and it foresees new landslides in the mountain.

Saprolitos – presumably saprolite – is chemically weathered rock, which is common in tropical areas and is known for instability problems.  This of course raises questions as to the state of analysis of landslide hazard prior to construction of this project.  These concerns are raised by another comment in the article:

“The most serious thing, according to this report, is that the “mountain also presents old traces of landslides of considerable size”, which shows that for some time there have been mass movements that have not been reported.”

I am not surprised if this is the case, but one wonders as to the degree to which these were mapped and analysed prior to the dam being constructed.  And where are the other slides, and are they being monitored?

“According to the photographs observed in the field and in a field visit, the geologist Osvaldo Ordóñez, professor at the School of Mines of the National University of Medellín, hired by the Government of Antioquia, indicated that it is necessary to carry out a controlled landslide to prevent the earth mass falls on top of the landfill and causes further damage.”

Be very careful!  This is what was attempted at Vajont, with catastrophic consequences.  It may be the right approach, but can only be undertaken under very, very carefully controlled circumstances, and the potential for a much bigger failure than expected cannot be excluded.  Such an exercise should only be undertaken with very detailed preparation; I am not convinced that the current situation allows that. 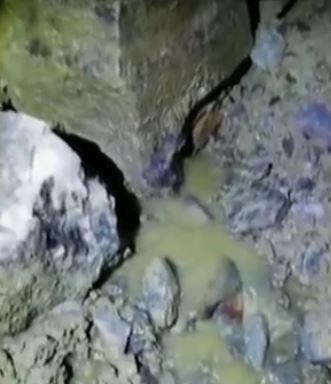 Small volumes of seepage from the base of the Hidroituango dam. Image from a video at Noticias Caracol

The volumes of water are not large, so maybe this is dewatering of the dam material during the rapid emplacement to raise the crest (i.e. it is consolidation of the dam materials), or maybe it is seepage from the leaking tunnels.  Either way this needs to be watched with care. Increases in volume would be an indication of greater concern.

I continue to feel that those managing the site are caught between a rock and a hard place.  Ideally the water level should be drawn down, but the damage to the tunnels seems to make this impossible. The only way to control the lake level appears to be to use the spillway (and maybe this means that the tunnels can be repaired and brought back into use), but this means raising the water level, which in turn is destabilising the slope.  This must be exceptionally stressful for all involved.