The RNLI, the UK lifeboat service, has a great story about an exceptionally lucky escape for a small dog, a Jack Russell terrier.  On Friday 9 April 2021 a man was reported missing on the coast near to Skinningrove on the North Yorkshire Coast.  The man had been searching for his missing dog.  Fortunately he was found and safely recovered by the RNLI.

The dog remained missing over the weekend.  On Monday 12 April one of the RNLI volunteers, Ed Thomas, was walking his own dog close to where the man was found. He heard barking and discovered the missing dog buried beneath a rockfall.  The dog was trapped by its rear legs: The missing Jack Russell Terrier recovered from beneath a rockfall in Skinningrove, North Yorkshire on 12 April 2021. Image from RNLI/Redcar.

Together with three other people, Ed was able to move the rocks to free the Jack Russell Terrier.  The owners were contacted, the dog was checked out by a vet, and then taken home.  The good news is that the dog was not seriously injured, and is now recovering. 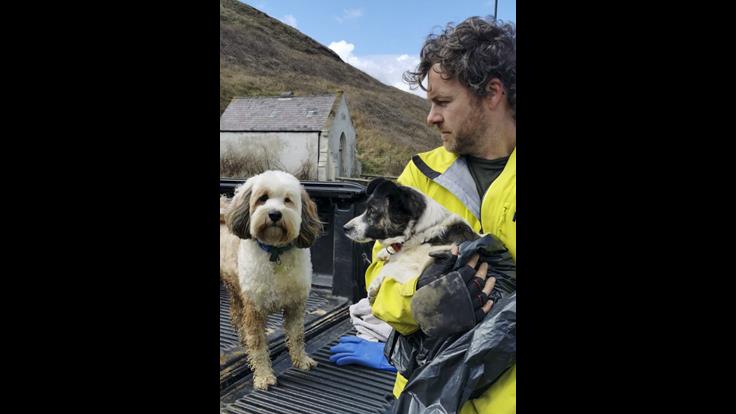 The missing Jack Russell Terrier and his rescuer from the RNLI. The dog was recovered from beneath a rockfall in Skinningrove, North Yorkshire on 12 April 2021. Image from RNLI/Redcar.

The odds were stacked against this small dog.  As I have noted previously, the survival rate for anyone caught in a landslide is very low.  The size of the blocks in the image above demonstrates this clearly.  The weather conditions over the weekend were not good, with temperatures below zero and even snow at times (quite unusual for the UK in April).  There were strong winds at times, so conditions on the coast would have been brutal.  This coast has a high tidal range, meaning that the chance of drowning was significant.  And finally, the dog needed someone to hear a bark.