On 23 July 2018 a saddle dam at the Xe Nammoy hydropower complex in Laos failed and breached, releasing 350 million cubic metres of water. The resultant flood inundated an area of about 46 square kilometres along the Vang Ngao River, a tributary of the Mekong River basin, causing massive damage. I featured a detailed review of that event by Richard Meehan and Douglas Hamilton in 2019.  They considered the cause of the failure:

An initial review of this failure by the first author was presented in late 2018, and was followed six months later by a review by an independent expert panel drawn by the Lao government from the International Committee on Large Dams (ICOLD). Both reviews concur in finding that the failure was caused by a foundation failure beneath one of the project saddle dams.

A paper has recently been published in the journal Geomorphology (Latrubesse et al. 2020) that also consider carefully the causes and impacts of this event.  Whilst the paper is focused mainly on modelling and understanding the flood that resulted from the breach of the dam, it also considers the failure mechanism of the dam itself.  Interestingly the authors have examined the materials from which the dam was constructed.

What is not in doubt is that heavy rainfall prior to the failure induced the breach event.  However, the dam did not overtop – indeed analysis in the paper suggests that the water was at least 15 m below the crest of the saddle dam when failure occurred.  This suggests that the problem was a structural problem within the dam or within its foundation. Latrubesse et al. (2020) provide this illustration of the aftermath of the failure at the saddle dam.  This is the clearest picture of the failure site that I have seen:- 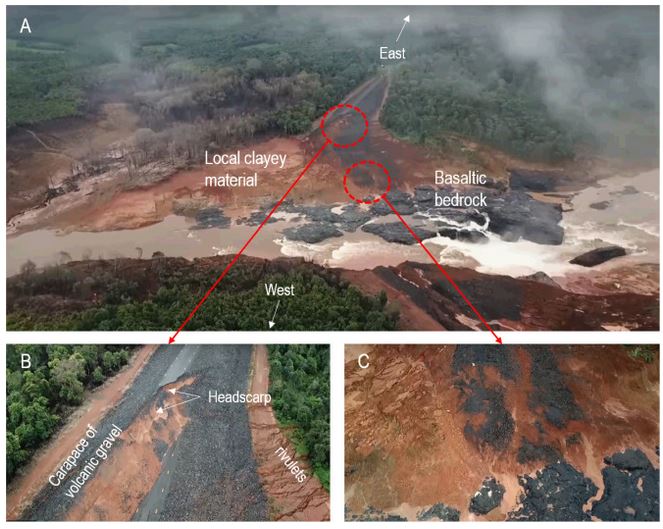 Note the weathered material that formed the saddle dam, sitting on top of basaltic bedrock.  Images B and C show slumping in the aftermath of the breach.

The core of the dam used weathered materials quarried locally.  The research team examined the characteristics of these materials.  They concluded that the dam materials may have had a lower clay content than the designers had anticipated, which in turn provided a higher level of permeability than had been expected.  Thus, Latrubesse et al. (2020) suggest that water penetrated into the core of the dam, driving piping and, ultimately, triggering a rotational failure in the dam itself, which then allowed the breach to occur.

This mechanism of failure is a hypothesis rather than a definitive analysis.  But of course it is interesting at this point because of the similarity in mechanism to the failure of the Edenville Dam earlier this month.

On reflection 1: an official report on a collision between a train and a landslide in the UK in 2019

The UK Rail Accident Investigation Branch has published a report into a collision between a train and landslide debris at Corby in Northamptonshire on 13 June 2019.  Key finding:

The investigation found that the cutting slope had failed because it was not designed to cope with a large volume of water that had accumulated at its crest. Flood water had accumulated at the crest because two adjacent flood storage ponds had overfilled with water from a nearby brook.

The coastal cliffs of Sidmouth in Devon, in the Southwest of the UK, have undergone three significant collapses in a 24 hour period. Many parts of the UK are undergoing an exceptionally dry Spring, so the failures are generating large plumes of dust.