An interesting aspect of some very large and rapid landslides is that they generate air blasts that can be highly destructive in their own right. A good example is the Langtang landslide, triggered by the 2015 Gorkha earthquake in Nepal.  In that case the air blast caused huge damage even in areas not reached by the landslide debris itself.  However, there has been comparatively little analysis of this phenomenon to date.

A recent paper (Zhuang et al. 2019) provides an analysis of the air blast generated by one of the large landslides triggered by the 2008 Wenchuan earthquake in China.  The landslide in question, the Wenjia rock avalanche (also known as the Wenjiagou landslide), has a volume of about 50 million cubic metres and traveled about 4500 metres:- 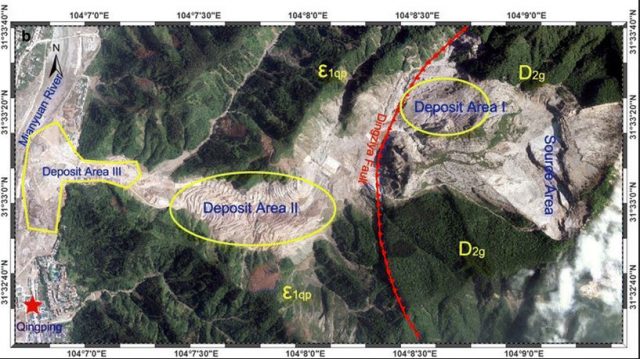 An aerial view of the Wenjia landslide, which generated an air blast. Image from Tang et al. (2018).

The study by Zhuang et al. (2019) is based upon a numerical analysis of the air blast generated by the landslide.  The model suggests that the rock avalanche itself lasted 210 seconds and moved with a maximum velocity of 65 metres per second (about 230 km per hour).  The authors describe evidence on the ground of the resulting air blast, including mature trees snapped in half:- Mature trees snapped in half by the Wenjia landslide air blast. Image from Zhuang et al. (2019).

This type of damage was found on both sides of the landslide path and downslope from the landslide deposit.  The analysis suggests that a blast wave started to form about 30 seconds after the initiation of sliding.  The maximum wind speed was 35 metres per second (about 125 km per hour).  This is the equivalent of a Force 12 hurricane wind, which is associated with complete devastation.  The effects of the air blast extended 750 metres beyond the margins of the landslide.  The model suggests that the topography had a strong control on the form of the blast that was generated.

We rarely account for the effects of landslide air blasts in hazard models.  This paper is further evidence that for the very largest and most rapid landslides they can be an important mechanism for causing damage.