One of the top ten landslide videos of all time was captured yesterday at Kråknes in Alta, in the north of Norway. This video shows what is almost certain to be a quick clay landslide.  It occurred in the morning of Wednesday 3 June 2020; the video has been posted to Youtube. If this video ceases working then it can also be viewed here.

VG.no has an article (in Norwegian) that explains the context of the video. It was collected by the owner of one of the houses, Jan Egil Bakkeby. He notes that they saw a tension crack downslope from their cabin on Tuesday evening, but chose to stay overnight.  It rained on Wednesday morning, after which the landslide occurred. He fled from the house and climbed the hill, and then shot the video.

The landslide appears to have occurred as a coherent raft in the first instance:- 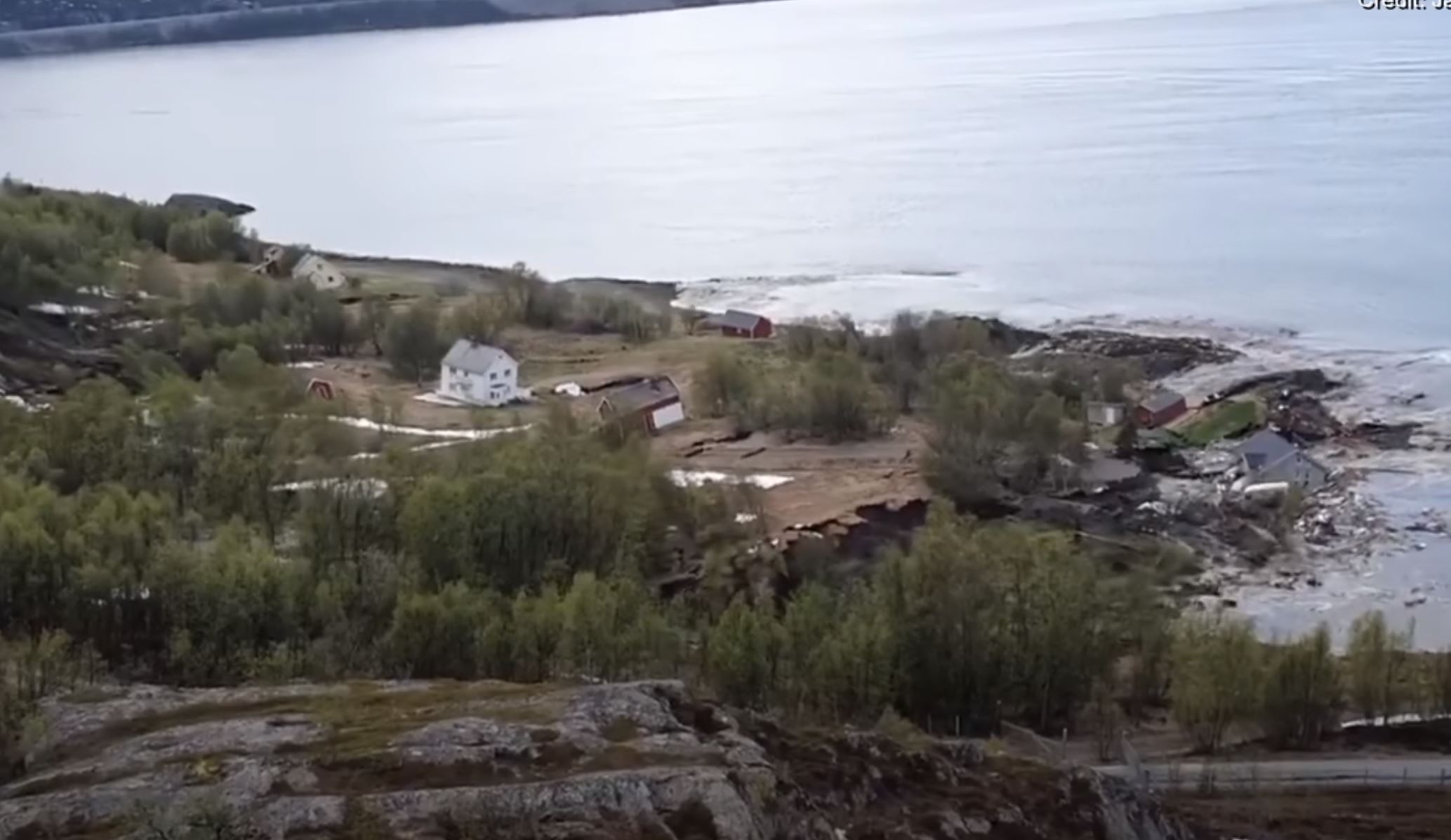 The initial phases of the Alta quick clay landslide. Still from a Youtube video collected by Jan Egil Bakkeby.

There is a change in gradient of the underlying bedrock towards the sea, which caused the raft to start to fragment in the latter stages:- 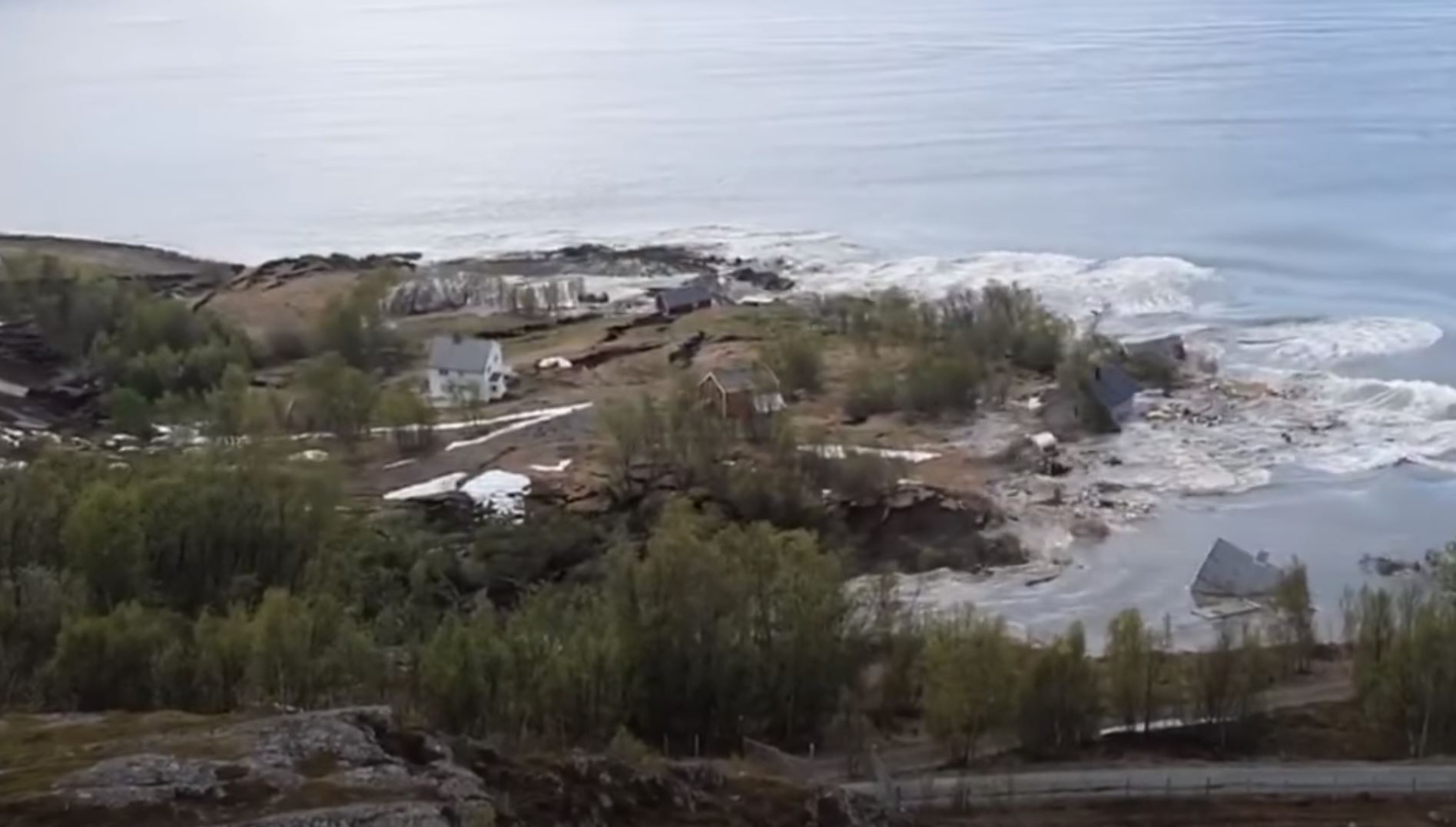 The latter phases of the Alta quick clay landslide. Still from a Youtube video collected by Jan Egil Bakkeby.

There is a great deal of valuable information in the video about the behaviour of the landslide itself, and the way that it generated a displacement wave.

I suspect that this was the second phase of the landslide. The very early shots seem to show considerable existing damage at the front of the slide, on the right side of this screenshot:- 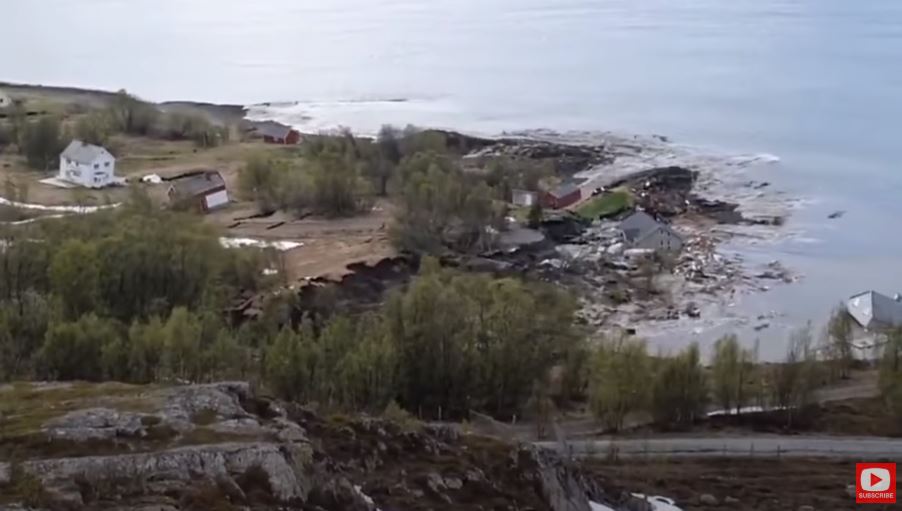 The very early phases of the Alta quick clay landslide. Still from a Youtube video collected by Jan Egil Bakkeby.

Quick clays are glaciomarine materials that have strange properties.  When disturbed they are very weak – indeed their behaviour is similar to that of a fluid.  But undisturbed they are much stronger, primarily because of the role of salt, which glues the particle structure together.  When this structure is disturbed, the quick clay rapidly weakens, allowing these spectacular landslides to form.

I have featured a number of other quick clay landslides over the years, including examples from Sweden, Norway and Canada, and a similar type of landslide from Brazil.  The most famous example is the Rissa landslide, also in Norway, for which another excellent video is available.

On reflection 1: Further landslides at Eastchurch in Kent

Yesterday further failures occurred at Eastchurch in Kent, the site of the coastal landslide that destroyed a house over the weekend.  Further properties are now at risk.

On reflection 2: saving lives at Brumadinho

An interesting paper is available for online review in the journal NHESS looking at ways in which lives could have been saved during the Brumadinho tailings dam failure last year.

Many thanks to the various people who highlighted this to me via this site, by email and on Twitter. Your help is much appreciated.