The Lidong Village landslide in China

Whilst for understandable reasons it barely registered on the international media radar, China suffered a major landslide on Friday night.  The Lidong Village landslide, in Yaxi Township in Lishui, Zhejiang Province in East China occurred at about 10:50 pm on 13th November.   At the time of writing 25 bodies have been recovered, with a further 12 missing.

ecns.cn has the best photograph of this very large landslide: 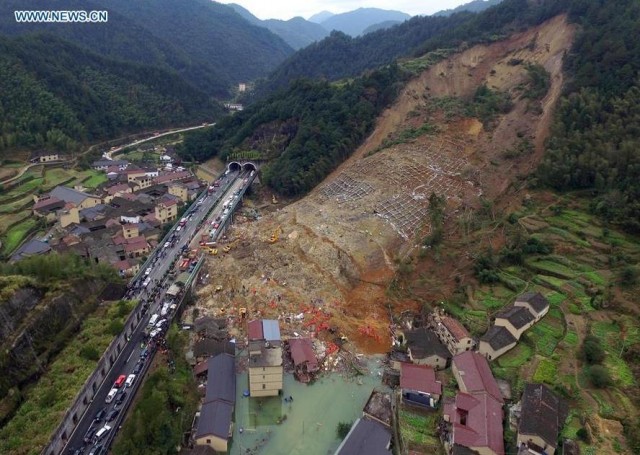 Based on this image the Lidong Village landslide appears to be a large rock and soil slide, mostly formed from deeply weathered rock (I cannot see any unweathered rock in the scar).  The slide looks to be quite complex with a number of shear surfaces.  Of particular interest is the grid work in the upper part of the main debris accumulation.  This is almost certainly slope protection, perhaps soil nails or rock bolts, suggesting that the slope was known to have stability issues  The lack of large numbers of trees on the slope suggests to me that the slope had been cleared.  However, it is unlikely that the slope protection that us visible was designed to stabilise a failure as large and deep as evidently occurred.

Note also that in the bottom left corner of the image the highway has a rock shelter to protect against instability on a cut slope.

The image below, also from ecns,cn, shows rescuers working through the accumulation of debris.  Note that the slope protection is visible in the top corner of the image: Xinhua reports that the area was suffering very heavy rainfall at the time of the landslide.  As yet there seems to be little online that asks questions as to why this landslide occurred.  It is not obvious to me that the road should have disrupted the tow of the landslide, which was on a slope on the other side of a small river.  I would be very interested to see an image of this site before the Lidong Village landslide occurred, but as yet have not been able to identify a location.