You will probably be aware that an apparently quite destructive earthquake struck central Italy overnight. I thought I’d try to give a first take on the likely impact of this event. First, as ever, there is some pretty good information about the earthquake on the USGS Earthquake program website. They have provided the following helpful maps:

At this point (c. 8:00 UT) the USGS is estimating that there are about 68,000 people living in areas that have suffered an earthquake intensity of VIII (severe shaking) or above, mostly in the town of L’Aquila. This is an area with a mix of old and new buildings built in a hilly area, as this image (from here) shows:

Although the earthquake is not huge (USGS estimates are Mw=6.3), the shallow depth (10 km) and fairly vulnerable buildings means that the impact could be quite substantial, albeit in a fairly limited area. Italy is well-prepared for earthquake response, which will help.

So, what of landslides? Well, an earthquake of this size should be capable of triggering a fair number of slides. A good starting point is the Keefer (1984) relationship between earthquake magnitude and area affected by landslides: 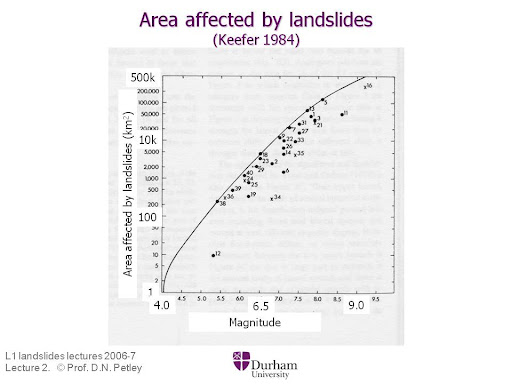 This gives an area affected by landslides as about 2000 km2 (give or take quite a lot, though). The area is certainly landslide prone, as this Google Earth perspective view shows (I have marked the epicentre location as per the USGS. The town in the foreground is L’Aquila):

Incidentally, the mountain in the background is Gran Sasso, which houses an important particle physics laboratory in a deep tunnel. I would be interested to know how the experiments have fared during the earthquake.