The BBC is carrying a quite interesting story at the moment about the use of artwork from the nineteenth century to evaluate rates of coastal erosion. The story originates from Robin McInnes, who is an established figure in coastal management. Robin was the Coastal Manager for the Isle of Wight, in southern England for many years, during which he led the way in terms of developing an understanding and management of coastal erosion. This ended somewhat abruptly a couple of years ago. Fortunately, Robin is clearly still active in an independent capacity.

The work has been written up in a short but useful report that is available here. There was also a New Scientist article that featured this approach in the middle of last year.

The Isle of Wight is well known as a zone of active coastal erosion, most notably as a result of a series of large landslides along the southern coast, including probably one of the earliest events captured on camera: 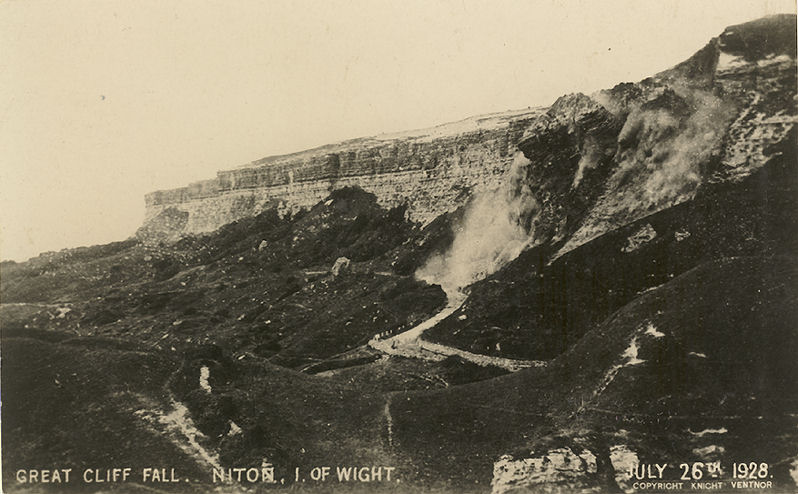 Fortunately, the south coast of the Isle of Wight is also both beautiful and accessible. It was a particularly fashionable tourist destination of the rich and famous in Victorian (mid to late 19th century) times, which meant that it was also frequently captured in artwork. Robin McInnes has amassed over 400 pieces of artwork from the period 1770 onwards. He has graded the quality of depiction of each artist in order to determine which provides a representation that is sufficiently reliable to be usable today. McInnes suggests that good quality depictions can be used to:

An example of the way that this type of approach can be used is as follows. The first image below is a painting that McInnes highlights. It is called ‘Ventnor Cove’ and was painted in 1825 by Charles Raye. The image below is a photograph from the 1890’s of Steephill Cove in Ventnor (from here): Here is a photograph of Steephill Cove from 1906 (from here): And finally, here is a modern day image (from here):