Lugworm casts on the beach, Islay

Lugworms are marine worms that live as benthic infauna. You’d be lucky to catch a glimpse of one in the flesh, since they spend most their time in the sediment, but you can see their traces if you walk the beach at low tide at Ardnave, in northern Islay, along the western shore of Loch Gruinart.

They look like this, a big extruded pile of mucous-bound sand: 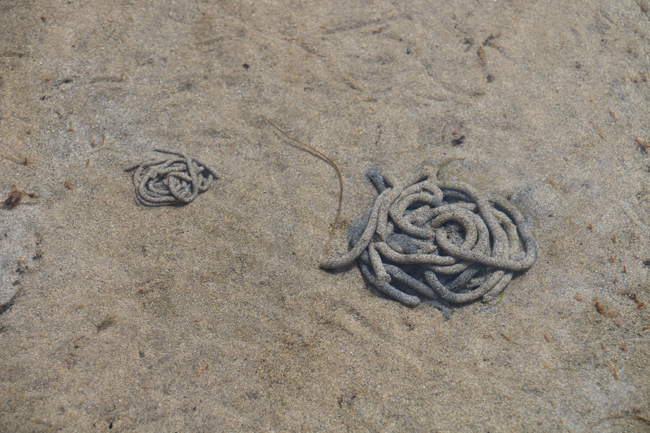 Each of these piles of castings consist of sand that was consumed through one end of the worm, had the good stuff digested, and then the undigestible mineral grains were ejected out the back end. In the photo above, note the color differences – this reflects differences in the concentration of heavy minerals in the sand – ilmenite and the like – relative to quartz. The lugworms are little miners, and we can assess their “tailings” (the word takes on new meaning in this context!) if we want a sense of the composition of the sediment just below the surface.

Two more exemplars, exposed above water, with a lens cap for scale: The whole beach is a landscape of these features. Note the little ‘craters’ adjacent to the piles of casts – these are the holes leading to the “head” end of the worm. They dwell in a U-shaped burrow, with the castings being ejected at the “tail” end. So each pile corresponds to one pit. There’s a complex concentration of lugworm tubes in this sediment – imagine if the sand were invisible and all you could see was the parabolic trace of these hundreds of U-shaped burrows. It would be an astounding density of upside-down arcs!

But the most important thing about lugworm casts? They are fun to squish underfoot as you run along the shore, as my son discovered!