The mining landslide at Pau Branco caused a significant release of mine waste, which appears to have flowed into the water retention structure below.  This image, from the Observatório da Mineração, shows the flow path:- 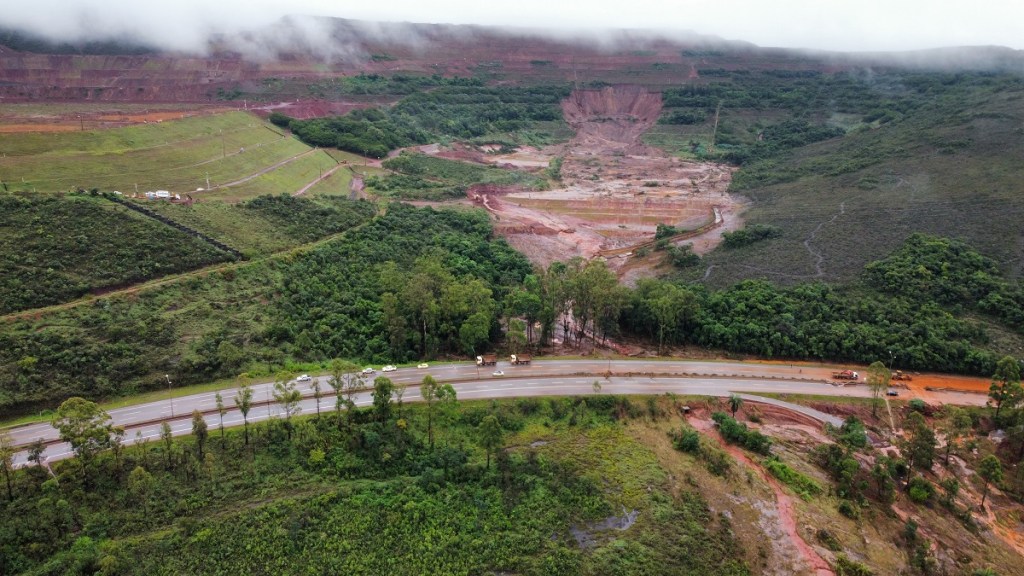 The flow path of the 8 January 2022 landslide at the Pau Branco mine in Brazil. Image via Observatório da Mineração by Bruno Costalonga Ferrete.

As the image shows, the landslide overtopped the retaining structure, which remained essentially intact (note the superficial erosion on either side of the dam abutments).  The debris, presumably now more fluid having entrained water and saturated sediment from the lagoon, flowed across a major road, the BR-040.  This is captured rather nicely in the video below, posted onto Youtube:

On Youtube, videos have been posted of the situation on the road as the flow arrived.  The best of these was taken from the cab of a lorry on the road at the key moment:-

Another video recorded the event from a different angle:

Meanwhile heavy rainfall continues in Brazil.  As a consequence a number of mining operations have been temporarily suspended, including those by Vale and Samarco, both of whom have had major tailings failures in recent years.  Vallourec, who operate the mine at Pau Branco, have been served an order for the environmental damage caused by the slope failure on Saturday, totalling over R$289 million (about $52 million).

Sadly, some newspapers are suggesting that the landslide was associated with the death of a family of five people.  The situation is a little unclear –  Forum reports (in Portuguese) that:-

The family dodged the landslide and took an alternate route, but ended up being buried. The bodies of the victims were found on Monday (10).

The suggestion appears to be that the family took a detour as a result of the road closure, but was then buried by a separate landslide.