I have posted detail of the sequence of events on a new blog post here.

There are a number of posts on Twitter this morning showing the massive, catastrophic flood flood event in the Chamoli area of Uttarakhand in northern India this morning.  The videos are terrifying and remarkable – an example is this one:-

There is uncertainty about the cost of this event, but some reports suggest around 170 people, possibly including about 50 labourers at the construction site of the Rishiganga hydroelectric scheme.  There will be huge uncertainty in this figure; hopefully it will reduce.

There is increasing clarity about the events at Chamoli.  There are a number of reports that the HEP scheme at Tapovan has been swept away (this may be the site in the video in the tweet above), and also that the landslide affected the village of Raini.  The Google Earth image below shows these two locations:- Google Earth image of the area affected by the catastrophic flood at Chamoli.

The question as to the cause of this event has been solved by the availability of a Planet Labs image collected today (7 February 2021).  Dr Dan Shugar of the University of Calgary was the first person to deduce from this that the cause of the disaster was a landslide.   This image shows the source of the disaster – it a large rockslope detachment from Trishuli, The scar is the dark area just below the centre of the image.  It has moved northwards onto the glacier, and turned into a rock and ice avalanche that has moved toward the northwest.  Note the huge amounts of dust that has been left by the landslide: The landslide from Trishuli that caused the Chamoli flood. Image copyright Planet Labs, used with permission.

The Planet Labs imagery shows the impact of this event downstream.  To the north of the image above there is still a vast amount of dust in the air:- 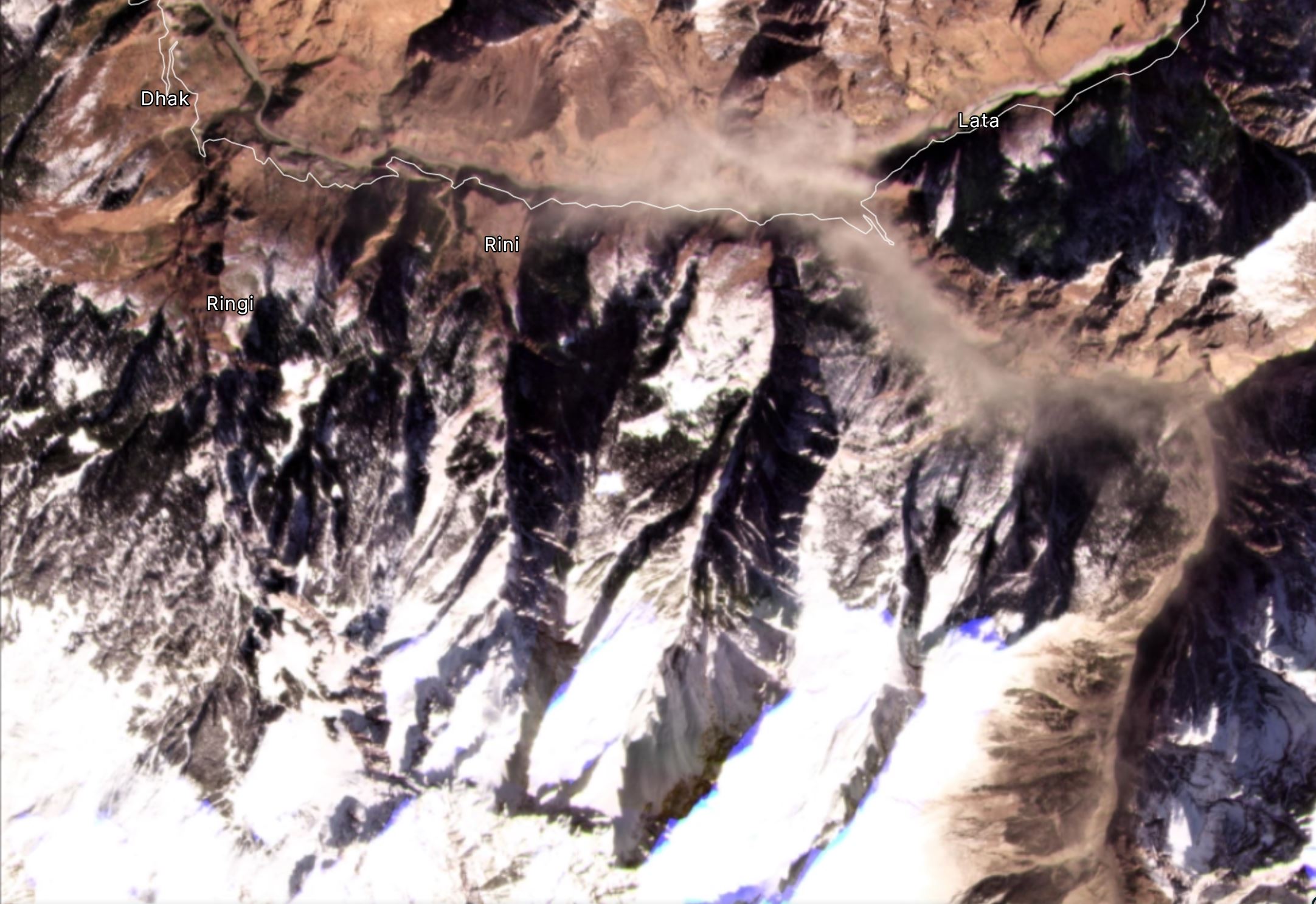 The area of the landslide downstream from Trishuli that caused the Chamoli flood. Image copyright Planet Labs, used with permission.

The valley with the road marked is the one containing Raini (located where steep bends are seen in the east) and Tapovan, as shown in the first image in this post.

In many ways this event is similar to the 2012 Seti River flood in Nepal.  That was also triggered by a giant rockslope failure, from the Annapurna massif, which transitioned into a catastrophic flood.

Hopefully we will get further images soon of the upstream areas to understand this event (and of course to determine the risk of another event), but it is now clear that this was a landslide.  In the meantime, rescue operations are underway.  Reports suggest about 10 bodies have been recovered.

I have posted detail of the sequence of events on a new blog post here.