Drawn to Geoscience: Pluto and the Dwarfs

This post is part of our Drawn to Geoscience series where our own JoAnna Wendel creates (and explain her process for) comics of stories published in AGU’s news website and magazine Eos. The news story, Six Things Dwarf Planets Have Taught Us About the Solar System, can be found on the Eos website.

This latest comic was a tough one! Because it’s inspired by my longer article “Six Things Dwarf Planets Have Taught Us About the Solar System,” I had to condense a lot of information down into a short-ish comic. That meant I couldn’t include every point from the article. I ended up using only stuff about specific dwarf planets—Pluto’s surprising complexity, Ceres’s shiny carbonates—and only stuff that were big discoveries that more than just scientists could be excited about—like the origins of Pluto’s resonance orbit and Ceres’s potential ocean.

Once I had the topics I wanted to cover, I started mapping out the comic. I decided to make Pluto an actual, speaking character, because, why not? This was supposed to be a story that celebrated Pluto not only as a “dwarf planet”, but also as an important body in the solar system. When Pluto was reclassified, a lot of people referred to it as a “demotion”, and I wanted to portray that Pluto is still Pluto, with all its weird geology, no matter what we call it.

Because Pluto was telling the story, I made the dialogue more casual that I usually do. I actually had to beef up the dialogue at one point because someone asked if the comic was for kids. Well sure, kids can certainly read it and learn something, but I also wanted to target an adult audience enthusiastic about science.

The first page includes Pluto, representations of the solar system’s current planets, and a very fictional gathering of the planets (even wearing hats) all making fun of Pluto. While not the most scientific, I like bending the rules a little to make a story.

Describing Pluto’s resonance with Neptune was relatively simple using two ellipses, one for Pluto’s orbit and one for Neptune’s, and I drew arrows coming out of the planets to show their migration.

For the page about Ceres, I just drew from an actual image of Occator Crater and attempted to show its shiny spots, full of sodium carbonate. And in the drawing of Enceladus, again I like to bend the rules in the name of whimsy, and drew some weird ET sea creature.

On the Pluto page I pulled inspiration from actual images of New Horizons and Pluto’s surface—you may recognize the weird “ice cells” from Sputnik Planum and some ice mountains.

I’m still trying to figure out what’s a good balance between words and pictures but I think in this one I’m coming close to finding that balance—you don’t want too many words, then people won’t read it. They’ll look at the picture and move on. You don’t want too few words, because you can’t convey EVERY idea as a picture. So I’m still learning about that.

Otherwise, I think this one worked out well! 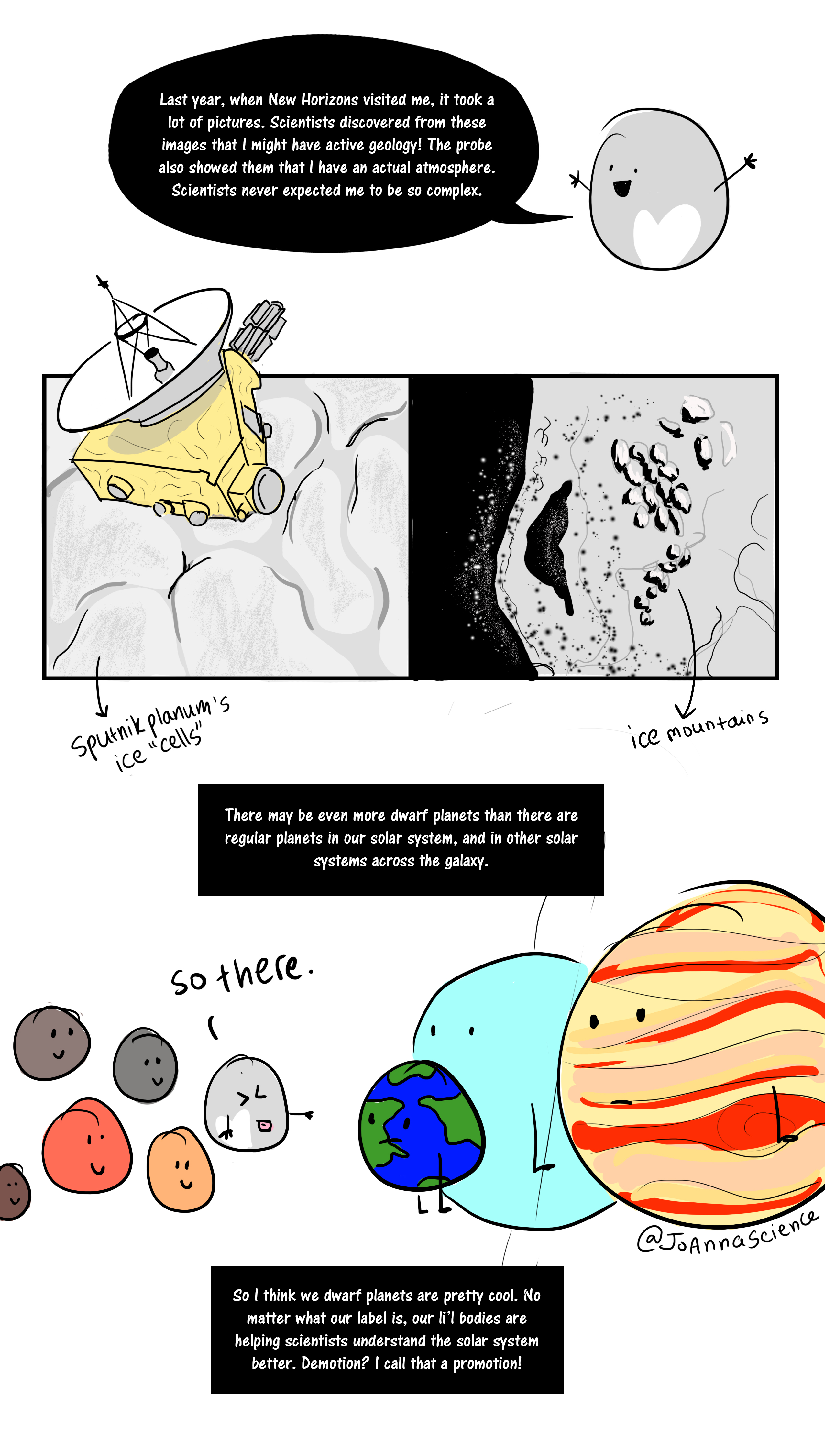 Posted in: Drawn to Geoscience, SciArt, SciComm, science and society, Visuals No Comments/Trackbacks »