…Maybe more than one. I think it’s about time that we headed to the beach at Saligo Bay, Islay, Scotland, where there are exquisite outcrops of the Smaull Graywacke of the (Neoproterozoic) Colonsay Group. These are turbidites (deposits of submarine “avalanches”) that were later folded and cleaved during the end-Ordovician Caledonian Orogeny (equivalent of east coast North America’s Taconian Orogeny).

I spent a delightful overcast day with these outcrops this summer, and made eight GigaPans there, as well as gathering imagery for a new 3D model (rendered post-facto by Marissa Dudek). Let’s examine the primary and tectonic structure of these rocks together using these immersive media in addition to good old outcrop photos.

We begin with the primary sedimentary structure of graded bedding. Here are three(+) beds, with the main central bed providing a lovely illustration of the concept: … and adding some annotations: The crisp, sudden transition from coarse to fine marks the top of one bed, and the bottom of the next youngest one. These surfaces may well be erosional: in other words, the older bed may have had additional sediment on top that was burnished off as the incoming younger turbidity current roared in, prior to it dumping its load. A few more examples won’t hurt. They’re easy on the eyes, after all. Can you identify the graded beds in this outcrop? Explore the GigaPan and note how the sandier units weather away more slowly than the muddier units.
Link 0.38 Gpx GigaPan by Callan Bentley

This one shows a nice example of how the geopetal aspect of graded bedding can get wrapped around the axis of a couple of adjacent folds, giving a fan-shaped array of younging directions: The folding these rocks have adopted is exquisite. 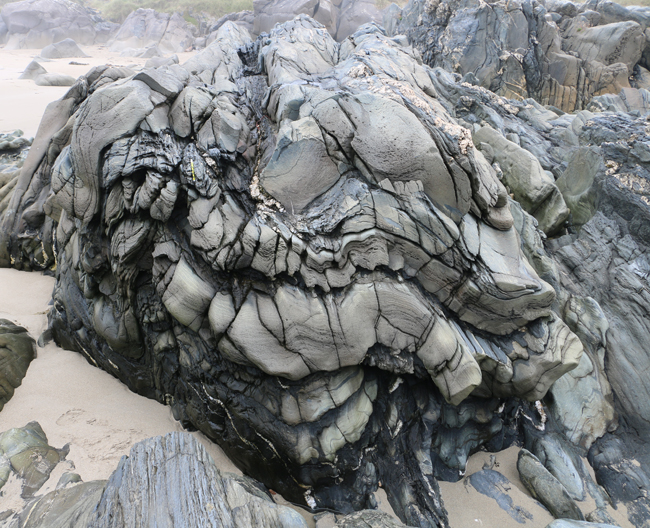 Here’s that same outcrop in GigaPan format, if you want to dig into the details:
Link 0.54 Gpx GigaPan by Callan Bentley

The other side of the fold imaged above (i.e., rotating 180° in perspective) is this one:
Link 0.4 Gpx GigaPan by Callan Bentley There is so much going on in that image: the graded bedding, the disharmonic folding, the cleavage, the differential weathering, the veination… even the cobbles on the beach have stories to tell.

Explore this exquisite outcrop, one of my favorite outcrops I saw all summer, here:
Link 1.1 Gpx GigaPan by Callan Bentley 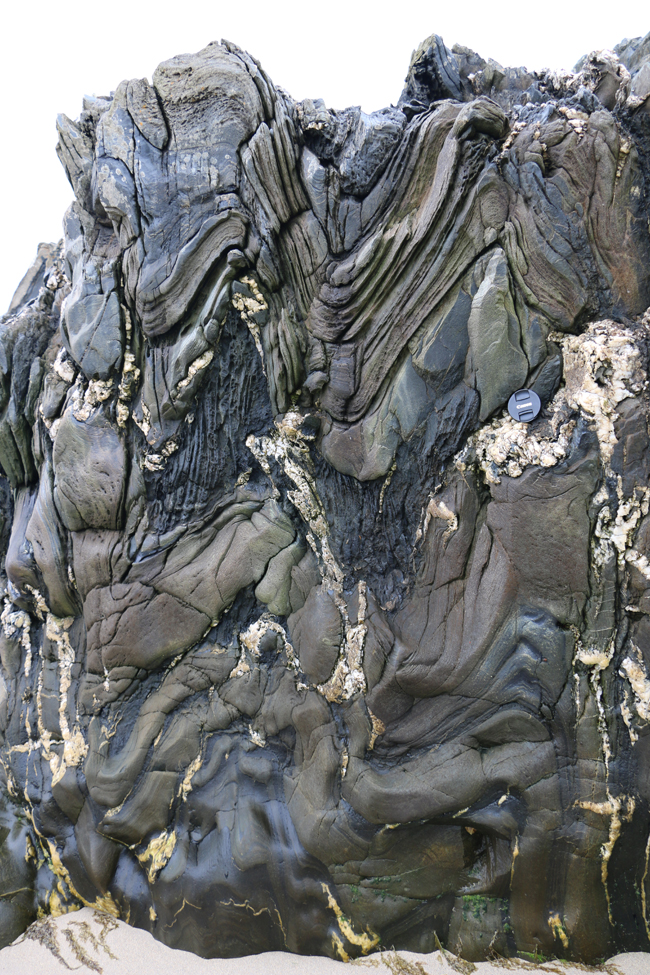 Another folded outcrop for you to explore in super-high resolution:
Link 0.76 Gpx GigaPan by Callan Bentley

Let’s also examine the cleavage that results from differential stress being applied to these strata: The cleavage is less well developed in the sandstones than in the mud rocks, but it can still be discerned. Examine this outcrop, for instance: GigaPan of a nice outcrop that shows the cleavage well:
Link 0.5 Gpx GigaPan by Callan Bentley

…And one more fold, showing the effects of weathering: Around the corner, a small river feeds into the sea, and the folding is more subtly expressed, as well as being weathered to an uglier outcrop:
Link 0.57 Gpx GigaPan by Callan Bentley

Zooming in on this outcrop, I challenge you to figure out whether bedding is continuous or not across the central vertical fracture: Is there a fault here?
Link 0.89 Gpx GigaPan by Callan Bentley

Here’s a 3D model (3.9 million faces) of the dolerite dike. The sole annotation is a pencil for scale.

Close up photos of its texture: If you’re lucky enough to get to visit Islay in person, be sure to visit this awesome place. It really stands out in my memory as one of the most delightful places we explored this past summer.

Webster, D., R. Anderton, and A. Skelton. A Guide to the Geology of Islay. Ringwood Publishing, Glasgow: 178 pp.