This afternoon, I finished with classes, and packed up my bag, and headed out into the bright afternoon sunlight to head home and work from there. Just in front of my building, I ran into one of my star pupils, Victoria, and had a conversation with her. I’m really glad that I ran into her, because if I hadn’t I might have been in my car at the moment the earthquake hit. Instead, Victoria and I wrapped up our conversation and then I felt a weird vibration come up my legs (through the soles of my sneakers) from the concrete walkway (P waves). I asked her, “Do you feel that?” and crouched down. She answered “Yes,” right as we wobbled side to side a bit (S waves) and then suddenly the whole campus started shaking (surface waves). Trees were swaying, and leaves rustling, and plate glass windows on the English building were undulating like water. No glass broke, but the outpouring of students and faculty from the buildings was immediate. There was only one student freaked out and crying that I saw. Everyone else was wide-eyed with wonder. As you can imagine, they had a lot of questions for the geology professors on the scene. It didn’t take long until the geology “fan club” students and geology professors Shelley Jaye and Chris Khourey joined me in front of the science building. We all engaged with the discombobulated populace and answered their questions, augmented by my iPad’s access to Twitter and the USGS website on the event.

The earthquake turned out to be nothing like the last quake I felt on campus: it was much larger (magnitude 5.8, upgraded to 5.9, downgraded to 5.8 again, as opposed to 2.1 last time) and it was much further away (72 miles, as opposed to 1 km last time). Its epicenter (the spot on the Earth’s surface directly above the spot where the rock moved), was located near Mineral, Virginia (appropriately enough). It was apparently the state’s most powerful quake since 1897.

I took a copy of the simplified geologic map of Virginia produced by Chuck Bailey of William & Mary, and overlay it onto Google Earth, and you can see that the epicenter (which is practically the hypocenter, given how very shallow this quake occurred!) is squarely in the middle of the Piedmont province, a zone of mashed-up and recrystallized oceanic rocks that got scraped off a subducted slab of oceanic lithosphere and added to North America in a “Pacific Northwest” style event hundreds of millions of years ago. 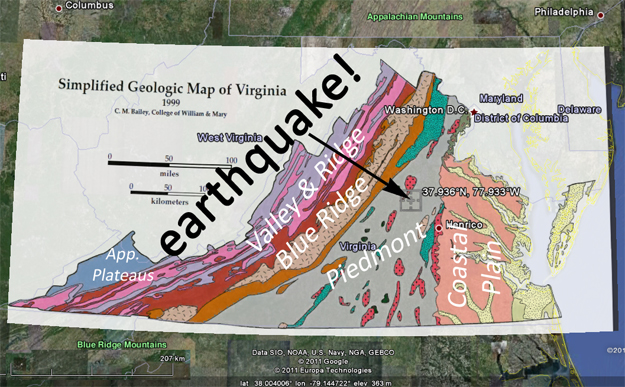 This Piedmont of Virginia was a zone of intense mountain-building (and faulting, and earthquakes) between 460 and 250 million years ago, during the time of the Appalachian Orogenies, a series of tectonic collisions that added new crust to the southeastern edge of North America. It is very possible that one of these ancient faults was reactivated in today’s event.

One of these is prominent in the geologic map above, although its trend does not match that of the earthquake’s focal mechanism. 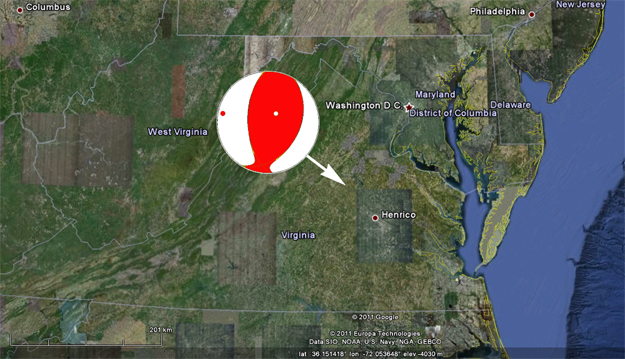 I grabbed a detail of the Geologic Map of Virginia from here and overlayed it on Google Earth with the coordinates of the epicenter as provided by the USGS, and got this: 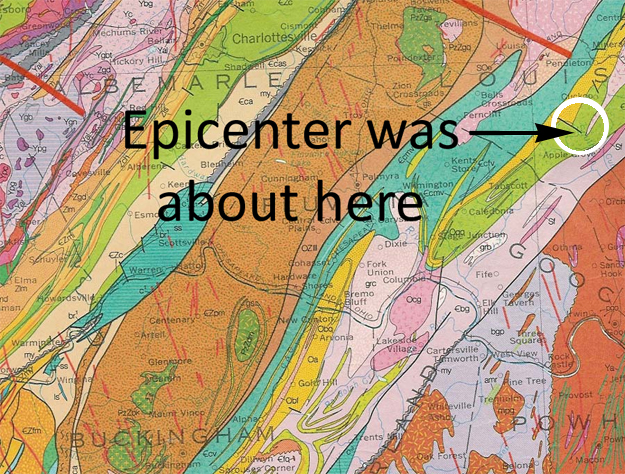 You can see that the dominant structural trend of the region is northeast-trending. That fits pretty well with the beach ball diagram above. However, there are also younger faults (some of them related to Atlantic rifting and the breakup of Pangea, others to the Chesapeake Bay impact structure) that cross-cut the older rocks and older faults. One prominent one in the map immediately above trends towards the southwest, disrupting the “Appalachian” structure and offsetting it with an apparent right-lateral sense of displacement.

UPDATE: Since I posted this, I got an e-mail from Chuck Bailey, and he attached this map, which he encouraged me to share far and wide. It shows the major faults in the area, and historical seismicity, including today’s quake: That provides a little bit of context, eh? Looks as if the Spotsylvania and Lakeside Faults are suspects. Thanks, Chuck!

So what’s with that “reverse fault” focal mechanism anyhow?

As I mentioned a few weeks back when detailing my ascent of Darton Peak, similar reverse faults are known from the Piedmont. Here’s “the Darton Fault” in DC, where very recent faulting has placed Piedmont metamorphic rocks on top of “Coastal Plain” gravels: One possible explanation to make sense of a reverse sense of motion on such a young fault (younger than the youngest strata it cuts across) is differential rebound of the crust due to isostatic adjustments. As the east coast is eroded, rock material is removed, and that changes how much the crust weighs in that area. Changes in how much weight is pushing down on the rock can result in changes to the stress field that rocks (or pre-existing fractures in rocks) are subject to. If that change results in a greater stress than the strength of the rock (or the friction holding the fault still), then you get movement, and that generates an earthquake.

The area of today’s quake is known as the Central Virginia Seismic Zone, a designation that came about because in the past there were plenty of (small) earthquakes felt in this area. Why exactly are there more quakes there than elsewhere in Virginia? We’re not really sure. But the pattern is clear enough that the USGS felt obliged to designate that swath as higher in risk than other regions of the Commonwealth: Note that this is an area where we’ve had earthquakes before, and will have earthquakes again (like the 2 aftershocks we’ve already had). Before anyone starts getting worked up about the SuperMoon or 2012 or some other such hooey du jour, please realize that this is merely the Earth doing what the Earth does. It’s a bit bigger than the usual east coast earthquake, and it was felt a bit more widely, but this is pretty much par for the course.

The waves were detected by the EarthScope array in the midwest: what a beautiful visualization of the energy traveling out from Virginia! You should download the whole 2.5 MB file to watch.

The North Anna Nuclear Power Station is located near the epicenter. This worries me a bit, but it looks as if the plant is so far doing fine on its diesel generator backup power system. It would be a shame to have central Virginia become the next Fukushima. I’ll keep you posted on what I hear about Lake Anna.

The seismic energy from the quake seems to have traveled along the “structural grain” of the Appalachian mountain belt to the northeast, and was felt as far as New York, New Hampshire, and Boston, if Twitter can be believed. Interestingly, it didn’t seem to travel as far to the south, and that may have to do with the orientation of that red wedge in the beach ball diagram – it’s oriented to the northeast, whereas the corresponding southwestern compressive wedge was mainly oriented down into the earth. Some folks in Tennessee and South Carolina felt it, though. Overall, seismic waves are transmitted more efficiently through compact, elastic materials. East coast rocks are relatively old and cold, and thus more dense and more capable of transmitting seismic energy. California and the west, in contrast, has a higher rate of heat flow through the crust and so those rocks are more “poofed out” by being warm — they take up more volume, and so it’s harder for seismic energy to swiftly pass through them. Furthermore, in comparing the great distance that these waves traveled to a similar magnitude event in California, it’s worth keeping in mind that many of the fractures which would retard the transmission of seismic energy in the east have been sealed shut by mineral veins, while a lot of the west coast’s fractures are still relatively fresh. It’s hard for seismic energy to cross empty space. Those two factors –temperature and fracturing– may have something to do with explaining why this event was felt so widely up and down the eastern seaboard.

I spoke to the Washington Post and EARTH magazine on my drive home, and got home to find that I had a new crack in my wall, and that my cat was hiding in the closet and wouldn’t even come out for food. My wife reported that a bunch of things jumped around, and that one glass fell off the counter to shatter on the floor. All in all, a mild damage report for our humble abode.

This post will be updated later with more information as I learn it.