Back in April, I finally had a chance to accompany the petrology classes from UB and SUNY Fredonia on UB’s annual trip to Bancroft, Ontario. I’ve been trying to go on this trip for years, and I’m glad I got to before I graduated, because, WOW. Bancroft is chock full of some pretty amazing things (especially if you’re into petrology, mineralogy, structure, glaciology, and pretty much everything else – it’s known as the ‘Mineral Capital of Canada’, for one!)

Bancroft is located about halfway between Toronto and Ottowa, in the Grenville terrain (or province). The main compressional event of the Grenvillian orogeny happened about 1.7 billion(!) years ago, but metamorphism was still occurring around 1 billion years ago. The results of the orogeny are usually obscured in areas southeast of Bancroft by the Appalachian orogeny (which occurred between 440-410 Ma), but in this part of Canada they’re very well preserved. (For a more in-depth overview of the Grenville orogeny, check out Callan’s recent video post!)

The main goal of the field trip was to make a progression through increasing degrees of metamorphism (metamorphic facies) of the Barrovian pressure/temperature series. This means that we saw metamorphosed rocks in the greenschist to granulite facies of this diagram: 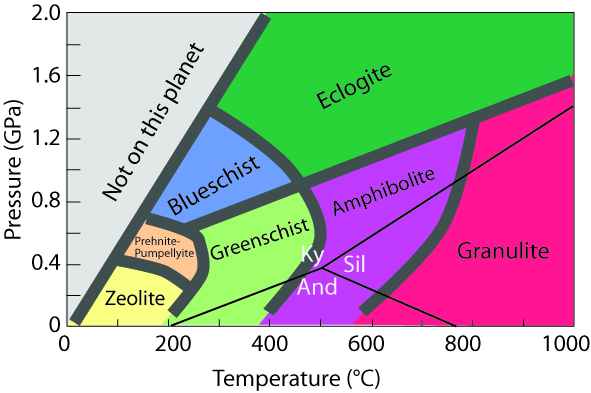 I’m not a petrologist, so I’ll stick to photos and a little commentary, but if anyone else has more detailed knowledge of the wonders of the outcrops, I’ll be happy to annotate them. We’ll start in the Greenschist facies (and a little before, in the case of the first figure): Examining a diorite dike in a granodiorite outcrop on ON 7. Beautiful slickensided fault surfaces on the other side of the road. A little farther to the west, LOTS of chlorite and epidote and spheroidal weathering in diorite.

There are some instances of pegmatite along this outcrop, which suggests that metasomatism (alteration by hot fluids) was at work. But the interesting thing is that this pegmatite lacks quartz – so what happened to it? Well, take a walk a little farther to the west, where you’ll find… This diopside-rich outcrop (diopside is a calcium magnesium silicate) is where all that silica ended up: contact metamorphosing some sort of carbonate (probably a dolostone) into a skarn. It’s awesome that you can walk a few meters and go from the intrusion to what it metamorphosed.

Before we finished up for the day, we stopped at another fascinating roadcut. The upper unit is a well-to-poorly sorted sandy unit with some angular clasts of quartz at its base, overlying a massive, aphanitic dark grey rock. The top probably represents a high-energy fluvial environment (it’s almost a breccia), and the bottom is a metavolcanic (possibly a metabasalt). But that’s not why it’s so awesome. Why is it awesome? Because this, my friends, is an exposure of the Paleozoic Unconformity – more than half a billion years of missing time in between those two units. An unconformity is an erosional surface that divides two rock units of different ages, meaning that whatever was deposited (or formed) between the ages of those two units was not preserved in the geologic record. We say that the time is ‘missing’ because there is no longer a record in the rock of the geologic processes that were occurring (possibly for millions of years, like here). According to the Ontario Geologic Survey, “For a period of roughly 400 Ma, between the Late Proterozoic and the Middle Ordovician, the Precambrian bedrock of southeastern Ontario was subjected to weathering in a tropical environment. Karst surfaces, paleosols, laterites, and supergene enrichment of existing mineral deposits developed this bedrock surface, which was subsequently covered by Middle Ordovician clastic and carbonate sediments.” And those sediments are pretty neat as well – in this location, which is a protected outcrop (according to the sign by the side of the road), you can see mudcracks and even raindrop impressions preserved. Not only does this stop have a fantastic unconformity, it also has some beautiful sedimentary structures on top. Mud cracks (indicating that at least part of this environment dried out from time to time) and VERY rare raindrop impressions can be found on top of the roadcut.

This unconformity can be seen in the rock record in other places in Canada, the US and Europe, although it’s very rare to be able to put your hands on it. (In Virginia, the Paleozoic Unconformity occurs where early Cambrian clastic rocks overlie Grenville-age metagranitoids; there’s a nice illustration of this on the Geology of Virginia Website.)

And thus ended day one. (Not a bad ending, eh?)