This morning I stumbled across a really interesting debris flow video, apparently dating from 7th August 2018.  The reports suggest that it was shot at the village of Grugnay in Chamoson in Switzerland:

The video shows a highly mobile flow.  The mobility is demonstrated by the effects of the impact of the upper part of the flow with the bridge:- The extreme mobility of the Grugnay debris flow in Chamoson, Switzerland in August 2018. Still from a video posted on Youtube

There are other views of this event online.  This compilation video from the Guardian also shows the effects of the debris flows striking parts of the village.  The final sequence is particularly dramatic:-

Geoengineer has a report about this event:-

A huge mudslide triggered by an overflowing flood caused by heavy storms struck the village of Grugnay in Switzerland on Tuesday night, 7 of August.

Fortunately, no injuries were reported as the slide provoked only material damage mostly concerning cars and houses. Swiss media reported that the incident started in a stream just above the village of Grugnay. People, that did not panic, opened road for the debris mass to follow its route downstream. According to local radio station Rhone FM, some buildings have been evacuated and two roads leading to the villages of Mayens de Chamoson and Ovronnaz were also closed.

The last months, the region has suffered extreme weather conditions. Snow, stored in the winter, is rapidly melting due to the high temperatures of the present summer. Thus, a vast amount of water is released into local rivers that have become raging torrents.

The landslide left a dramatic deposit, but fortunately caused no loss of life: 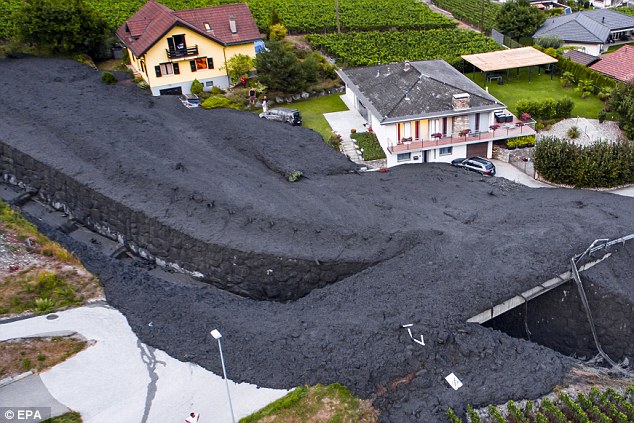 The aftermath of the debris flow at Grugnay in Chamoson, Switzerland on 7th August 2018. Image via EPA.