Glaciers at Point A and B have melted completely away.

The commemoration of a single disappearing glacier in Iceland, Okjokull has brought attention to what is quite a common event this decade, glacier disappearance. Here we report on a number of glaciers in the southern part of the Cumberland Peninsula, Baffin Island  that have either disappeared or separated into several parts  from 2002-2019. Way (2015) noted that on the next peninsula to the west, Terra Nivea and Grinnell Ice Cap had lost 20% of their area in the last three decades. The retreat and disappearance of ice caps in the area have led to a INSTAAR project at UColorado-Boulder examining vegetation that had been buried and is now being exposed.  This year the high snowlines by early June have led to the near complete loss of snowpack across glaciers of the region.  The melt rate of the exposed ice is higher than that of the snowcovered portion of the glaciers.

Glaciers at Point F and G have melted completely away. 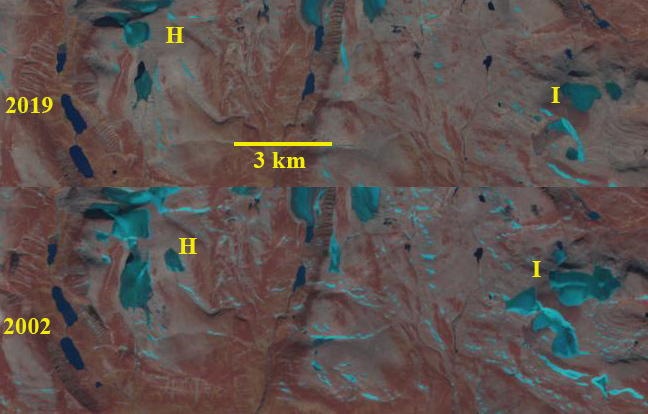 Glacier at Point H has melted completely away.

Glaciers at Point J and L have melted completely away.

Glaciers at Point N and O have melted completely away.