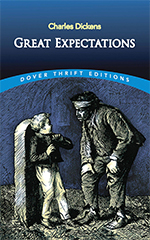 I’ve recently enjoyed David Copperfield and A Tale of Two Cities, so I re-read Great Expectations. Somehow we ended up with three copies of it in our house. It is what it is, a solid novel by a talented writer. The great strength of Dickens, I’ve come to appreciate, is his wacky characters – the level of detail in his portraits of these imagined humans is profound, often endearing or revolting, and frequently amusing. Great Expectations had terrific characters in spades – notably Jaggers and Wemmick and Miss Havisham. But the overall arc of the story was far less satisfying than I had grown accustomed to, with Dickens’ other great works so recent in my memory. The fact that Pip never really reaches reconciliation with Estella, Joe, or Biddy seems a real shame, and I found myself feeling both sad for him and also a bit disappointed in him, a sour taste in my mouth as I shut the back cover of the book. Magwich’s end also felt abrupt and unpoetic, with Pip slipping him knowledge about Estella in the old convict’s final moments, and … for what? It felt pointless and distracting to me. And Estella herself – she never grows out of her awful attitude, even when she gains awareness of it. She’s just as mean to Pip in the end as she was in the beginning. Ultimately, I didn’t love this book. A novel of humanity reckoning with climate change, rather similar in many regards to Kim Stanley Robinson’s The Ministry for the Future. Both novels feature a middle-aged European woman as protagonist: a bureaucrat for Robinson, and the queen of the Netherlands for Stephenson. Termination Shock distinguishes itself with significantly more action than Ministry, though: there’s more fighting and interpersonal interrelating. The plot is basically this: a wealthy Texan convenes a group of wealthy people who live in low-lying areas of the world to participate in a private geoengineering enterprise, launching sulfur into the stratosphere (reducing the solar energy flux and thus cooling the planet). These people are directly threatened by rising sea level, and they have the means to take action to stop that sea level rise. They do so. Then what? Well, some countries are gratified; others are incensed. The action triggers a counteraction, and the plot drives forward. Stephenson’s great ability is to weave in many strands from life into his novels. This one cites COVID-19, COVID-23, and COVID-25 as recent pandemics that humanity has struggled through; and delves deep into Sikh culture, the feral hog problem in the American South, and China and India’s battle over their border in the Himalaya. He also manages to invoke all kinds of recently-developed technology: Directed-energy weapons (like those that are thought to cause Havana Syndrome), an EMP, and deepfake videos all make appearances, many serving as key turning points in the plot. Drones are EVERYWHERE in this book, thoroughly saturating the near-future imagined by Stephenson. Overall, I felt like this was a solid novel, and I enjoyed reading it. Though fiction, it thoroughly explores the geopolitical ramifications of someone deciding to geoengineer the climate. It wasn’t as impressive as Seveneves, but not as anticlimactic as Cryptonomicon.

A Short History of Nearly Everything, by Bill Bryson Another re-reading. In popular science, it seems to me that there are relatively few ways that authors choose to tell the story of the universe from beginning until now. What strikes me as worthwhile about Bryson’s attempt is that he did it his way. It’s not a straight-up chronology of events from 13.7 Ga on page one until you and me show up on the last page. And it’s not a “history of science” either – it’s somewhere in between, with the order of topics discussed basically just Bryson’s preferred shuffling of the deck. But what you read in Chapter 12 doesn’t necessarily presage what will be covered in Chapter 13. That keeps it fresh, I think. I hope it goes without saying that Bryson’s wit is as charming here as in any of his other books – he has a very endearing way of writing, grounded in midwestern sensibility but seasoned with British style and snap. I first read A Short History of Nearly Everything shortly after it came out, but I know more now than I did then. And so I found my reading interrupted by stumbling over errors of fact or emphasis – for instance him saying that Hawaii is on a plate boundary, when the coolest thing about that archipelago is the fact that it’s so far from a plate boundary! It’s a pretty chewy tome, but I think worth reading if you haven’t already just for Bryson’s fresh “outsider’s” take on cosmology, Earth science, and everything in between.

The Egg, and other stories, by Andy Weir I’ve really enjoyed two of Weir’s novels, and to my knowledge this is his first and only collection of short fiction. I listened to it on audiobook. The scientific acumen and technical practicality of Weir’s characters in The Martian and Hail Mary Project are absent in these short stories. These aren’t mini-Martians; they are their own distinct genre for Weir. He treats them differently. They feel like episodes of the Twilight Zone – most building up in a weird and unsettling way toward a “punchline” revelation at the end, recasting all you’ve just read and making you re-examine it with some level of “Aha, now I get it.” That’s the one great strength of this collection, and because it’s a relatively modest total number of stories, I think it would be regretful if I revealed any of the twists here… including one about the Twilight Zone itself…

Dreams From My Father, by Barack Obama Obama’s first book, written after law school but before being elected to political office: a compelling, readable account of his boyhood and early manhood. It’s anchored with the effort of coming to understand his biological father, who looms large in his life despite the two spending only a week together in Obama’s memory. Obama, the first Black president of the United States, was deeply shaped by childhood experiences in Hawaii and Indonesia, time spent trying to organize people in Chicago for a more vibrant and durable community, and also a key visit, post-Chicago and pre-law-school, to his father’s homeland of Kenya. This singular figure in the American political world has a singular backstory, and this is the book where he lays it all out – circumstances and decisions good, bad, and ugly. The level of self-reflection is extremely refreshing to contemplate – considering his successor in the White House.