Standing on the San Andreas Fault

I’m back to blogging!

Having just arrived in California and still in the process of unpacking boxes in my apartment, I decided the most productive thing to do was go on a hike. Silicon Valley is near a lot of Open Space Preserves as well as various local and state parks, and I was really eager to get outside and explore. And because I’m in California, I was hungry to finally set eyes (and foot) on the biggest fault I could get to.

Naturally, I chose the a field trip that required a trip on quite possibly the most winding road I’ve ever traveled (outside of a few in Guatemala), the Los Trancos Open Space Preserve in the foothills of the Peninsula. The drive is beautiful because along the way you get views like this of the Santa Clara Valley: 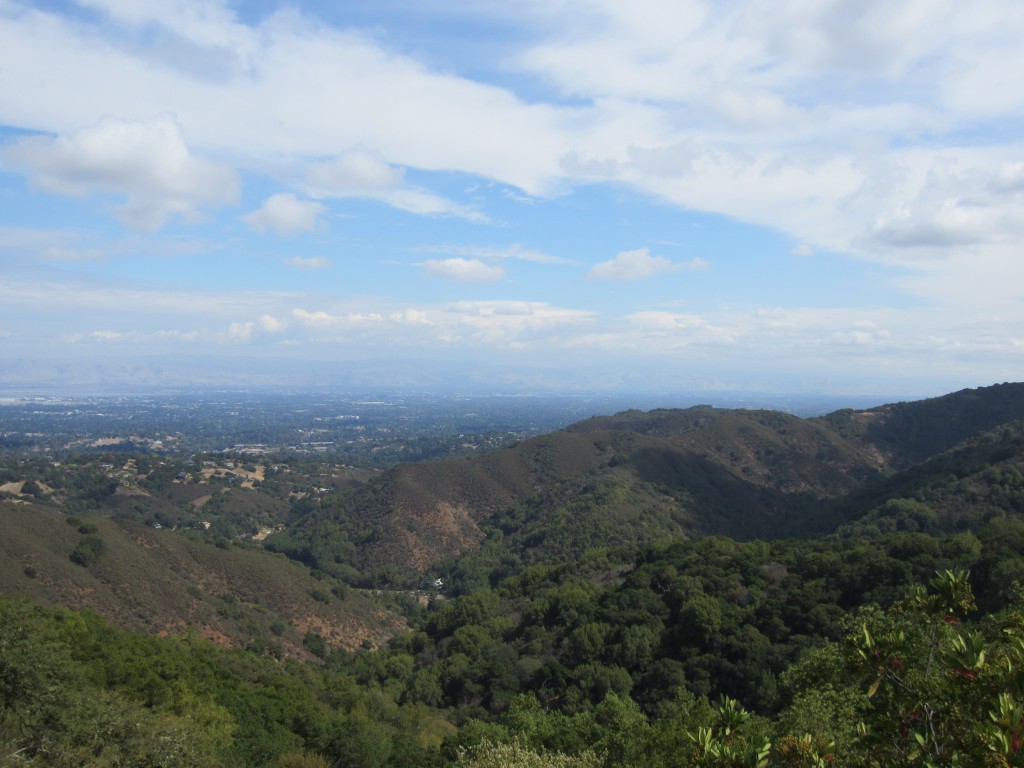 Looking to the southwest over the first of the foothills Sunnyvale, Santa Clara and a bit of San Jose The far southern end of the Bay A little more of the Bay

The road is a little nerve-wracking because not only are there tight turns and one-lane sections, but you’re also sharing it with some fairly serious bikers. (Anyone who powers up those slopes has my instant respect. Also, I’m very sorry if any of you got stuck behind my car on the way down – I was crawling because I didn’t want to turn a corner and accidentally rear-end one of you!)

The Los Trancos Preserve is right on the edge of the Santa Cruz mountains, which are full of beautiful views and well worth a visit in themselves. But it’s special for another reason, which is the San Andreas Fault Trail. On this trail, you can not only see indicators of motion on one of the most famous transform faults in the world, you can stand on the fault. That’s right – THIS is the fault.

The trail is fairly short and set up with numbered stations that go along with information on the trail guide. The stations are sometimes easy to miss, but if you go past one you can easily backtrack or loop around again.

Along the trail it’s easy to see a number of different rock types, some of them with very interesting histories indeed. This is a rather cruddy version of a very distinctive pebble conglomerate which, according to the trail guide, comes from Loma Prieta, a mountain 20 miles or so to the southeast. The USGS guide says this is from the Corte Madera facies of the Santa Clara Formation, which also includes serpentinite. (This is an excellent way to remind yourself about fault motions on the San Andreas, a strike-slip or transform fault with right-lateral motion; this means that these conglomerate boulders were eroded from Loma Prieta, crossed the fault onto the Pacific Plate, and were then transported in a southeast-to-northeast direction along the fault – for miles!) Pebble conglomerate along the fault trail (for better photos of this rock type, scroll to the bottom of the post)

I’d never actually encountered a fault bench before – probably because most of the faults I’ve seen are normal or reverse, and nowhere near as significant as the San Andreas – but once you recognize the landform, it’s easy to spot (the trail guide likens it to a leveled road bed with no road on it). Andrew Alden, who’s written a fantastic series of geological guides to the Bay Area, has a great post on the local PBS website about how it’s difficult to recognize the fault even with the help of satellite images – until you start looking at the digital elevation model of the area, which was acquired through airborne laser mapping. It’s very dramatic.

The offset fence (reconstructed from materials found onsite to resemble what happened in the 1906 San Francisco Earthquake) is probably the most visually striking feature of the trail: The offset on this part of the fault was only about 2-3 feet; farther to the north, offset in the 1906 earthquake was as much as 15-16 feet. A different perspective on the offset

But I especially liked the oak trees along the trail. Two of them in particular have been there since the earthquake, and you can clearly see, compared to the other trees around them, how they were tilted over and then changed their growth direction to remain upright. This is similar to what happens when you have creep or other slow movement of soil on a slope, except in this case it happened all at once when the fault moved. The large, dark oaks to the left and right of the trail are what you’re looking at – oaks don’t normally grow bent over like this! Cores from the trees have dated the main trunks to 1899, but the vertical limbs grew in 1908 – two years after the earthquake. Pretty tough trees!

On the other side of Page Mill Road from Los Trancos is the Monte Bello Open Space Preserve. This offers a number of trails that also follow the fault into the Santa Cruz mountains, and I decided to take the Bella Vista trail, which really is the high road. On the way to the hilly bit of the trail there is a sag pond, a depression formed in a pull-apart basin over the fault that’s filled with water, but then the trail opens up to views of the mountains beyond. The views are amazing here as well. There are also nice little outcrops of sedimentary bedrock on the trail as well, many of them with slickensides. 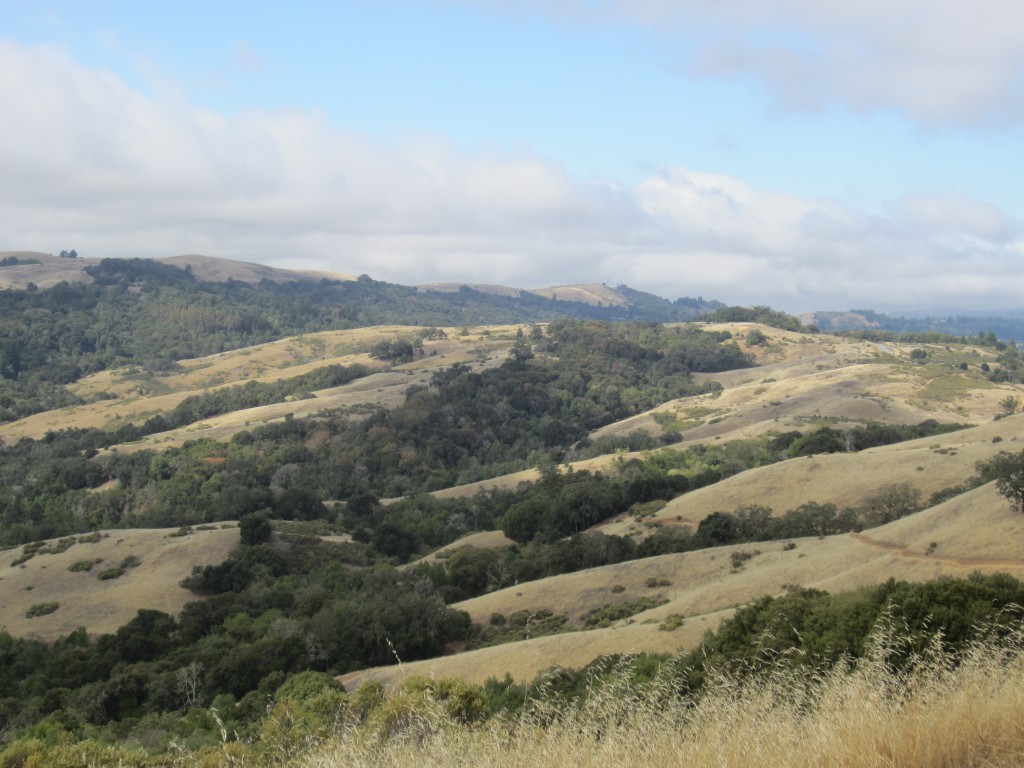 Views from the trail, looking back to the northeast

That day was also my first encounter with wild bay trees and California Buckeyes, which apparently drop all their leaves early in the fall. An eerie-looking tree. Don’t be tempted by the nuts – they’re toxic!

One of the things you notice immediately when you go out hiking around here is how dry everything is. Dry, dead, scratchy – you can practically smell it. California’s in the fourth year of a severe drought, and it shows. Dry grass as far as the eye can see…

Back at the parking area for the Monte Bello Preserve, you can find even more boulders of that Corte Madera conglomerate: Beautiful! People on the trail will wonder why you’re taking photos of your feet, however. This little guy was somewhat less amused than the other hikers.

If you’re thinking about visiting the preserves and looking for geological features, the guide you can download from the Los Trancos preserve is good, but there’s another, more kid-oriented one that can be found here. It’s got a set of activities and field trip stops that are pretty well-planned no matter what age you are, and some ideas for more formal class activities if you’re taking students. If you’re looking for more serious geological descriptions, the USGS has a field trip guide to the Skyline Ridge area of the Santa Cruz Mountains, which is where both of these preserves are located.

Standing on the San Andreas Fault