Volcanoes are a really popular subject for movie-fiction – they’re flashy, dangerous, unpredictable (unless you’re Pierce Brosnan), and they explode. They’re also appealing because moviemakers can, for the most part, get away with really spectacular CGI and not a lot of thought about the processes occurring on the volcano. (Not that they can get past us, but the average moviegoer hasn’t had much volcano education beyond the cone-with-a-central-conduit diagram.)

Incorporating volcanoes into fiction, however, is riskier, because you can’t just slap CGI onto the page. You have to describe what’s happening, and if you have a crappy description, it makes the story less believable and generally lowers the quality of the whole reading experience.

I spend a lot of time reading fiction as well as non-fiction, and I’m always interested when I come across a story that tries to incorporate volcanoes. Here are a few that I’ve found so far:

Melting Stones by Tamora Pierce (an offshoot of the Circle of Magic series)
These books are meant for younger readers, but I’ve always found them entertaining – and very well written. This is the latest of the offshoots of a series about young “ambient” mages – people who draw their magical abilities from their environment. Evvy, the main character in Melting Stones, is a stone mage, and has to deal with a reawakening island volcano. The descriptions of eruption precursors – acidified water, sustained earthquakes, poisonous gases – are spot on, and it’s really neat the way Tamora Pierce describes the forces at work within a volcano as if they were sentient beings. A good book if you like fantasy and realistic alternative worlds, and especially if you like strong female characters (a staple of Pierce’s writing, and one of the reasons I enjoy her books so much). 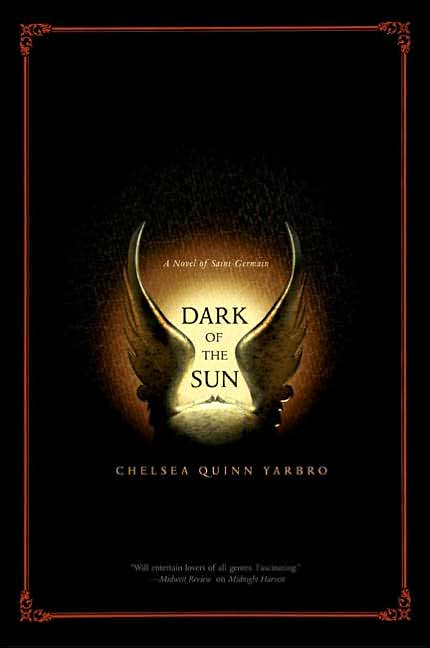 Dark of the Sun by Chelsea Quinn Yarbro

The Saint-Germain vampire (yes, vampire) series by Chelsea Quinn Yarbro are fabulous and very well researched works of historical fiction. Yarbro gets to move her main character, who is a vampire (and thus immortal) through many periods in history, and in this book he lives through the 416 AD eruption of Krakatau. It’s a fascinating book because you get to read how people might have reacted to a major eruption and its subsequent (very bad) climatic effects. Saint-Germain is forced to give up his merchant trade in China and move west; many of the people he encounters along the way think it’s the end of the world, and rightly so, since their crops and animals die, diseases run rampant, and life just generally goes downhill fast. It’s fortuitous for Saint-Germain because the ash in the atmosphere relieves some of the detrimental effects he suffers from exposure to sunlight – apparently volcanoes and vampires go very well together! The characters and writing can get a bit prosy sometimes, but the characters are complex and believable and you learn a lot about the cultures/time periods that they live in. (Right down to languages and clothing styles; really, Yarbro does so much preliminary research for these books that she could probably write a nonfiction companion text.)

Journey to the Center of the Earth by Jules Verne

The ultimate in geologic fiction. Volcanoes come into the story at both its beginning and its end; they are the route by which the travelers enter and exit Verne’s subterranean world. I’m especially fond of the French version, since it’s the original and nuances are often lost in translation (or obliterated entirely by clumsy adaptation). That said, the volcanoes in the story are not very realistic; even if they managed to get down into the crater of Snaeffels, Prof. Lidenbrock & Co would never have found an open volcanic conduit leading to empty caves and tunnels. For the most part, magma doesn’t drain away after a volcano is done erupting – it sits there and solidifies and plugs up the plumbing. Likewise, the exit from Stromboli would not have happened – even providing a wooden raft had been able to withstand superheated water and magma pushing it up a volcanic conduit, one might expect that being blasted out of a volcano might prove problematic. Still, the book is great for depicting the science of geology as Verne knew it, and since no one really knew much about volcanoes at that point, it’s interesting to see how he interpreted the facts available to him.

These are just a few things that I’ve found so far; I’m sure there are many others. What are your favorite works of fiction that include geology – accurate or not? (Book adaptations of movies don’t count, and we’ve already excoriated those enough. Books that were turned into movies do count.)