A week ago I posted about a tragic landslide accident in Japan, as recorded in archive footage collected by British Pathe and now available online.  There are some very interesting landslide reports in that archive; one in particular caught my eye.  There is a short news report about a landslide affecting the village of Cwmaman in South Wales.  The news recording is dated 28 February 1935, although the landslide actually occurred on 22 February 1935.

The footage reports that as a result of recent rainfall thousands of tonnes of earth and slag slid from the side of the mountain. The image below, from the film, shows the landslide debris:- 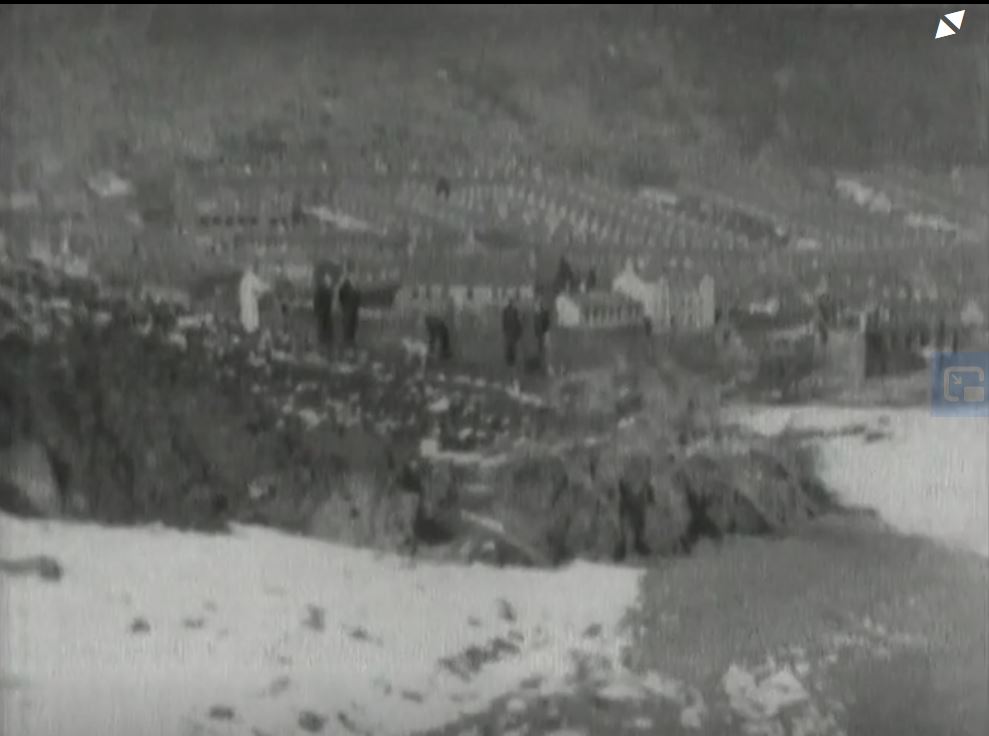 The the landslide came remarkably close to the village is not in dispute.  The image below shows another still from the news report.  The landslide debris appears to be directly adjacent to the end house in the terrace:- Clearly this was a very serious incident.  The interesting aspect is that it was not discussed in the tribunal report from the Aberfan landslide, which did examine other near-miss major colliery landslides in South Wales. The landslide, called the Fforchaman 1935 slide, is briefly discussed in Siddle et al. (1996).

Interestingly, this spoil tip became unstable again in September 1973 – there’s a detailed review of that event on Wales Online.  Spoil reached the houses once more, and the report indicates that this was yet another near-miss. In that case a decision was taken to evacuate permanently a row of houses on the edge of the village.  The houses were bulldozed a few years later.

This event is another illustration of the remarkable sequence of spoil tip landslides that occurred in South Wales, of which Aberfan was the most serious.  The Coal Authority is now undertaking a major review of all spoil tips in South Wales, following the Tylorstown landslide in February.  In the words of the highly esteemed landslide expert, Professor Eddie Bromhead (from the same article):

“Right now, you must expect some of the country’s older tips to slide down the hill and valley sides below them if storms like Dennis become increasingly the norm. Even those spoil heaps engineered to cope with surface water flows, for instance, are now at risk. None of them have been designed to retain stability in the kind of extreme weather we’ve been experiencing this winter.”