Anderson Glacier was the headwaters of the Quinault River in the Olympic Mountains of Washington. A century ago the glacier was 2 km long, and a half kilometer wide. Retreat of this glacier in the first half of the 20th century exposed a new alpine lake as the glacier retreated 1 kilometer. From 1950-1980 the glacier diminished slowly. From 1959 to 1990 the glacier thinned and retreated from the shore of the lake trapped behind the Little Ice Age moraine. The 1959 picture below was donated to me by Austin Post. Since 1990 the glacier has begun to shrink rapidly. The Google Earth image from 1990, indicates Anderson Glacier has retreated 200 m from the 1959 terminus position near the lake shore, green arrow to the 1990 position, pink arrow. The red arrow indicates a future location of a bedrock outcrop. 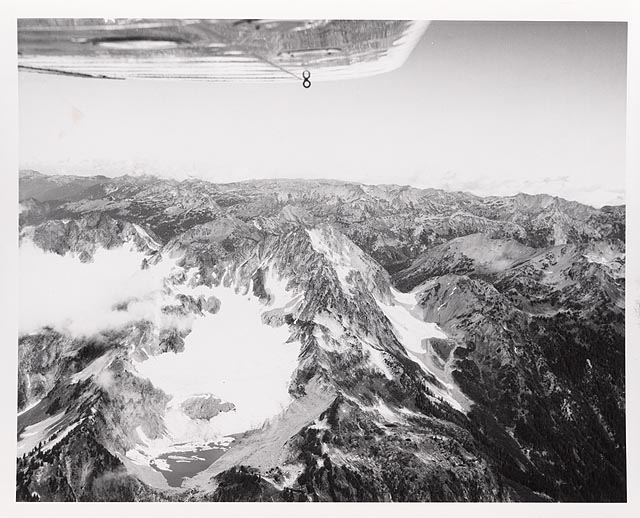 Investigating this glacier in 1992 we measured its area at 0.38 square kilometers, down from 1.15 square kilometers a century before. Ten years later the glacier had diminished to 0.28 square kilometers, but had thinned even more, leaving it poised for a spectacular change, over the next five years. Large outcrops of rock appeared beginning in 2003 and further exposed in 2005 and 2007 in the middle of the glacier. Note the outcrops in the 2007 image from Kathy Chrestensen. The 2009 Google Earth image indicates the 1990 terminus position, pink arrow, and the fact that there is no longer a ribbon of snow that is even 50 m wide. The snow patches have insufficient size or thickness to be classified as a glacier.  The largest outcrop at the red arrow had been beneath the ice in 1990, giving a scale to the thinning.  The glacier at this point no longer exists. In 2014 an Eric Hovden image indicates some seasonal snow in the basin, but the thin ribbon of snow has numerous holes in it as well, indicating the thin nature of the remaining snow patches, with a month left in the 2014 melt season. 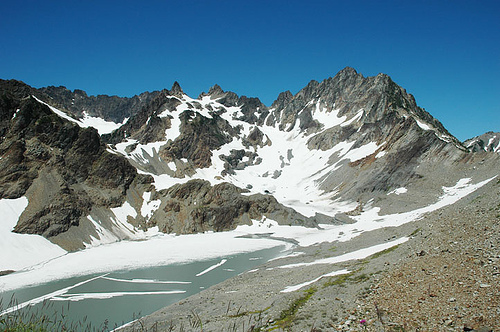 This glacier had become a series of small disconnected relict glacier ice patches in 2005 and by 2009 had disappeared. It is not the only glacier that is disappearing, which has led to a visual model for forecasting glacier survival (Pelto, 2010). The key is observed retreat of the margin of the upper portion of the glacier and emerging rock outcrops in the upper part of the glacier where snow should accumulate and be retained through the melt season. If a glacier does not have a significant persistent accumulation zone it cannot survive. Anderson Glacier was not the only glacier feeding the Quinault River, all the others are retreating as well. The result of this glacier retreat is reduced late summer and early fall streamflow, impacting salmon runs at that time of the year. This is primarily the fall Coho, Chum and Chinook salmon and Steelhead summer run. During the spring and early summer runoff increases as snowmelt still occurs, but is not retained in the glacier system.To get a sense of the special nature of this area Out of the Mist is an excellent start