This is an archive British Movietone newsreel, complete with dramatic music and rather elegant commentary.  The associated text suggests that the rockfall had a mass of about 168,000 tonnes (185,000 tons).  Niagara Frontier has this image of the rockfall:- 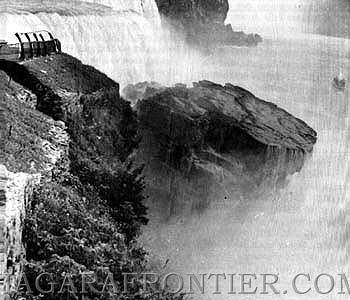 There is a good article about the Niagara Falls rockfall on the Niagara Frontier website.  The rockfall occurred on 28 July 1954 on the American Falls side of the site. It appears that cracks at the site, shown in the video above, were first noticed by a nine-year old child the day before the failure.  The rockfall left a large debris pile, which then became a tourist attraction in its own right. In the aftermath, the Niagara Frontier State Parks Commission undertook blasting to remove rock left in a precarious position, with large blasts on 6, 12 and 16 August 1954. Thereafter the site was deemed to be safe.