Landslides from the Norcia earthquake sequence in Italy

Landslides from the Norcia earthquake sequence in Italy

The M=6.5 Norcia earthquake in Italy a few days ago is the latest in a sequence that stretches back some months.  As I noted previously, Salvatore Martino from the University of Roma “Sapienza”, and his colleagues have been compiling an inventory of these landslides, which is being made available online.  Unsurprisingly, and very helpfully, they have been collecting data from the Norcia earthquake as well.  He has very kindly provided the following update, which I post here with his agreement:

On 26th October 2016 a strong earthquake (M 5.9 – 42.949°N 13.074°E) struck the Central Apennines (Italy) at 21.18 local time, starting a seismic sequence that is still continuing. The seismic sequence generated hundreds of aftershocks (with a magnitude up to 5.4). On 30th October another mainshock (M 6.5  at 42.84°N 13.11°E) struck the same area at 07.40 local time. This is the strongest seismic shock recorded in Central Italy since the 23rd November 1980 Irpinia earthquake. The seismic events caused severe damage to historical towns and villages at Norcia, Visso, Ussita, Castelsantangelo. Thousand of persons are now homeless and a lot of interruptions have occurred on main and secondary roads.

Since the first hours after the mainshocks the work-team of the Research Centre for the Geological Risks – CERI of the University of Rome “Sapienza” is operating in field to survey the ground effects induced by the earthquake. Up to now hundreds of disrupted landslides (sensu Keefer, 1984) have been surveyed. These events mainly include rockfalls, rockslides, roto-translational landslides and debris slides, which are distributed in a wide area up to about 25 km far from the epicenters of the two mainshocks.  The surveyed data will be used to update the database (Italian acronym CEDIT) of earthquake-induced ground failures in Italy (Martino et al., 2014), managed by the CERI, which will be available at this website: http://www.ceri.uniroma1.it/index.php/web-gis/cedit/ . This has been already updated after the 24th August 2016 Amatrice earthquake.

The following pictures show some of the main ground effects surveyed to date: 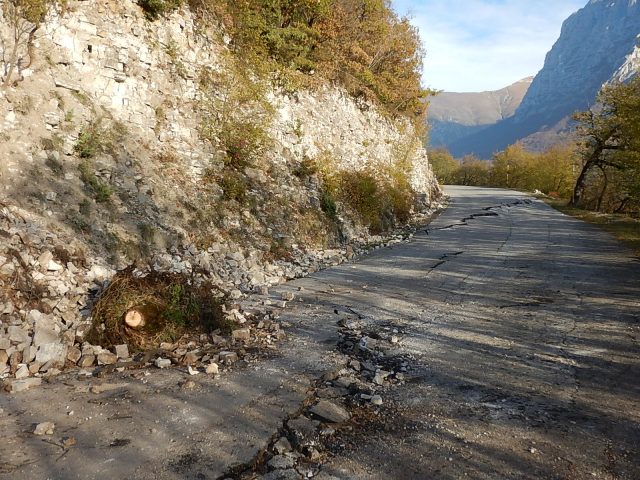 Youtube also has drone footage showing the aftermath of a large landslide near Visso: