Taplejung: another burst of fatal landslides in Nepal

Taplejung: another burst of fatal landslides in Nepal

The last month or so in Nepal has been marked by a lower level of landslide activity than was the case at the start of the monsoon season.  However, not unusually, heavy rainfall at this later stage has triggered a new burst of landslides in Nepal, with the district of Talejung in the east of the country being particularly badly affected it seems.  The Kathmandu Post reports seven deaths in the last 48 hours, including three deaths in a single landslide in Taplejung Municipality, a further death in another part of the same area, two deaths in a landslide in Kulung village in Bhojpur and one in Devisthan in Myagdi district.  Review Nepal reports a further four deaths in Keware in Syangja district early this morning.  At the end of last week, Republica reported that a child was killed in a landslide at Gajuri in Dhading district, and on Wednesday night seven people were killed in a landslide at Chyotchyot, which lies in Lamabagar Village Development Committee in Dolakha district.

Thus, in the last five days I believe there have been 19 landslide deaths in Nepal.

The Kathmandu Post has an article with images of some of the landslides in the Taplejung area.  This includes this photograph, taken by Ananda Gautam, shows a series of very mobile and surprisingly large debris slides on steep slopes: Landslides in Taplejung, via the Kathmandu Post and Ananda Gautam

The article suggests that this is the area calledDokhu in Taplejung, which is identified in Google Earth as being this region: 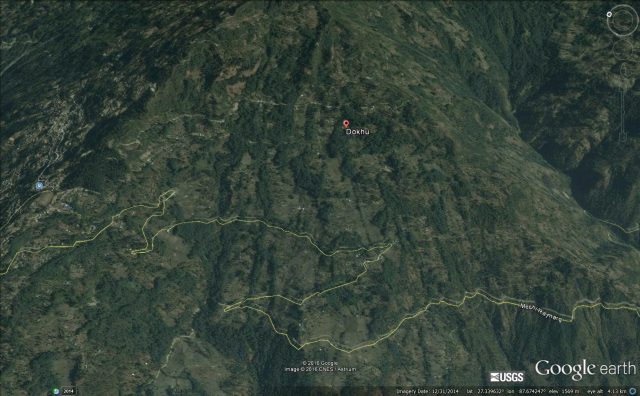 Google Earth image of the Dohku area of Taplejung district

It would of course be very interesting to know what is at the head of these landslides higher up the slope.  Often such failures start with a comparatively small landslide that then entrains large amounts of soils and regolith.  Experience suggests that these small landslides are often associated with road building, poor drainage and / or the emplacement of fill.