I have been extremely fortunate to spend the last week in the field in New Zealand with colleagues from GNS Science, University of Canterbury and Western University Canada.  I must say a huge thanks to Tim Davies of the University of Canterbury in Christchurch and Mauri McSaveney of GNS Science in Wellington, who arranged the trip.  Over the next few days I’ll try to post some images of the various landslides that we looked at down on the West Coast of South Island.  Before I start I should just point out that New Zealand has a wonderful landscape, especially in the weather conditions that we have experienced this week.  So, I think I should just start by posting an image that illustrates the environment and the geology of New Zealand: This is a view on the road between Porters Pass and Arthurs Pass, which crosses the Southern Alps.  The photo suggests that there is rather a lot going on from a geological / geomorphogical perspective, from the mis-fit stream in the foreground, through the terraces that flank it, the tilted but young (Tertiary) limestone beds through to the high mountains in the background (and notice the slot in the ridgeline).  The amazing thing is that such views are not unusual in New Zealand.

Anyway, perhaps the simplest landslide situation that we visited in our four day field trip was a recent silt terrace that is being eroded by a river at Whataroa.  The silt terrace is about 5 m high.  As the river migrates across its flood plain it undercuts the terrace inducing collapses: 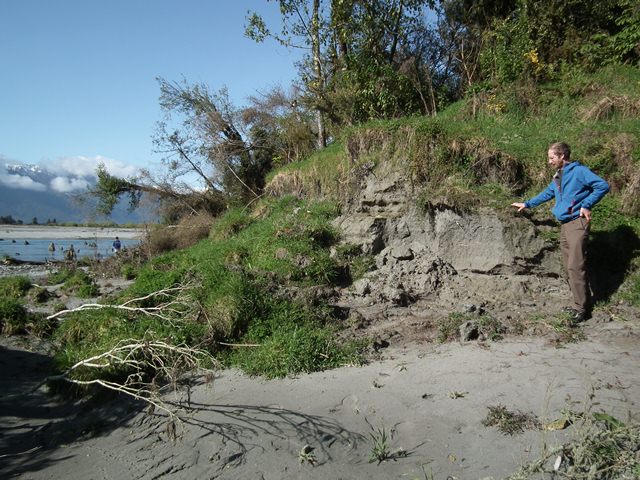 The pattern of failure is dominated by the mechanical characteristics of the silt.  The flowing water erodes it easily, leading to undercutting.  However, the material has some apparent cohesion, meaning that it can stand vertically (as the section next to Chris Smart shows).  As a result, the bank eventually fails through toppling (rotation forwards).  This mechanism is illustrated beautifully by the trees in the background.  After failure, a layer of turf is left in front of the terrace, providing some protection against erosion: Sometimes, as is the case here, the silt contains the remains of trees that were inundated when the terrace was formed.  The tree stumps provide additional protection against erosion for the riverbank. In some cases, they are left standing like monuments in the middle of the modern river: