The disastrous floods in the Philippines that resulted from the intense rainfall associated with the passage of Tropical Storm Washi a week ago has rapidly faded from the headlines.  However, the death toll continues to rise relentlessly as more bodies are found.  The latest report from the MDRRMC in the Philippines now lists 1,100 fatalities and a further 1079 people as missing, though cautions that there is considerable uncertainty associated with the latter statistic.  The majority of the losses (674 known deaths, 626 people reported missing) are at Cagayan de Oro, with 332 deaths and 406 missing at Lanao del Norte.

An interesting question is why the floods were so devastating when the tropical cyclone was quite modest in size and intensity.  NASA TRMM data has been used to compile a rainfall map: These data suggest that the rainfall totals in the coastal area were large – over 400 mm in total as the storm passed through.  However, by tropical cyclone standards even this is not particularly remarkable.  Undoubtedly a key factor was the location of the communities in a highly vulnerable location, but reports that the floods occurred as a series of catastrophic, very rapid mudflows might suggest that an additional mechamism was at play.  According to this article, PAGASA are now suggesting that the key factor may have been the collapse of landslide dams.  This quote is from a news conference given by DoST Secretary Mario G. Montejo:

“PAGASA had been doing its job conscientiously,” Montejo said. “In fact, places such as Bohol, Surigao, and Camiguin that heeded PAGASA’s warning and took appropriate actions had mitigated the effects of Sendong.”  Montejo, who was with President Benigno “Noynoy” Aquino III when he visited areas severely flooded by “Sendong,” also said that the flashflood that killed and harmed hundreds of people in Northern Mindanao and southern Visayas as was aggravated by the reported collapse of dams along the Cagayan de Oro River.

“It is most likely that the flashfloods in Cagayan de Oro were caused not only simply by the big volume of rain that fell in the watershed of rivers in those places, but essentially of the reported collapse of dams in the upper parts of the rivers,” Montejo said.

Reports from the field that reached the presidential party on the collapse of the dams are being investigated, per instructions of the President, he said.  Montejo said that the continuous rains may have caused the accumulation and build-up of water upstream of the dam.

“At some point, the dams may have collapsed when the trapped water filled with debris overtopped the dam. This could have led to dam breakage and failure,” he said.

“When the large volume of water trapped behind the landslide debris dams was released, it triggered the flashfloods. The landslide dam-break mechanism caused the flash floods, which would explain the sudden surge of water reported by survivors in Cagayan de Oro,” Montejo said.

Montejo pointed out that survivors described the flashfloods as “sudden surge”, while post-disaster pictures showed large amounts of mud and debris, including trees, carried by the raging flashfloods.  He also clarified that although the rainfall dumped by “Sendong” was not like that of typhoon “Ondoy” that generated 181 mm of rain for one day that caused the disastrous flashfloods in 2009. The landslide dam break that happened in “Sendong” had happened in 2004 in Infanta, Quezon and in 2008 in Iloilo, he said.

This is interesting news that fits with the observed behaviour.  If true, it should be comparatively easy to identify the landslide scars and remains of the lakes, even though they were short-lived. Although there is now a NASA image of the affected area, this unfortunately does not extend up to the headwaters, where the scars will be located.  A landslide process would be consistent with the observation of large amounts of wood debris, as this image demonstrates: 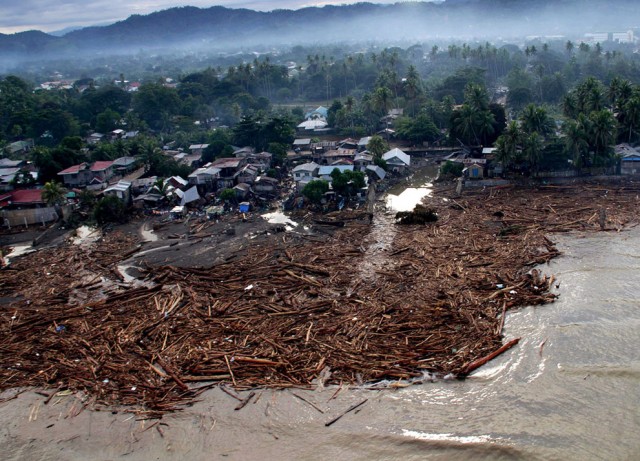 I shall await further news on this with great interest.  If confirmed it will mean that the Tropical Cyclone Washi disaster was in fact primarily a landslide-induced event.