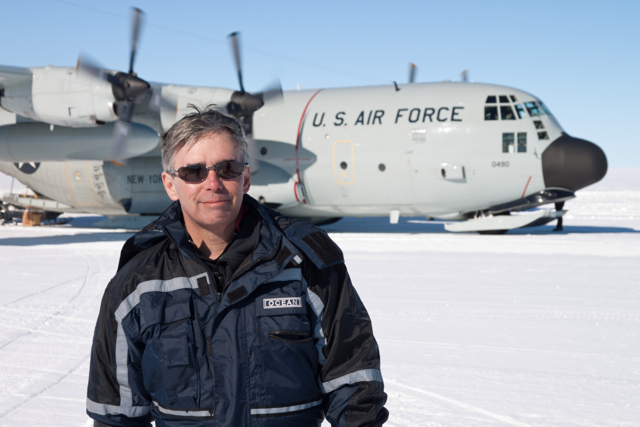 That’s me on the Greenland Ice Cap.

I’ve worked as a forecast meteorologist for over 40 years and am the Chief Meteorologist for the CBS affiliate WBOC TV in Salisbury, Maryland. I’m a graduate of the University of Oklahoma with a degree in Meteorology (Atmospheric Physics) and have a Masters in Earth Science. I grew up in Tulsa, Oklahoma, but my favourite place on Earth (Other than the polar regions) is London. (Huge Doctor Who fan!)

Music: Beatles, Classical, and I even like a few pieces of Opera. (Though that might be illegal for an Okie to freely admit.)

Sport: Cricket and football. Not that football, REAL football 😉 I root for Liverpool FC.

Books: All of them, especially Dickens, Sagan, and Richard Feynman.

Fave movie: Key Largo: Humphrey Bogart, Lauren Bacall, and a Cat 5 hurricane. You can’t go wrong with a cast like that!

My main hobby is photography, and I live in a place with plenty of opportunities for landscape pictures and this is an amazing area for birds. I have definitely been bitten by the desire to become a birder.

I love meeting people, and believe deeply that different cultures make our small spinning fragment of solar driftwood an endless source of fascination. A trip to another country is always in the planning stages and my last one was to Chile to see my second total solar eclipse last July. will go back in December of 2020 to see another total eclipse and am planning a trip to the Faroe Islands as well as Iceland.

Forecasting weather is my job, but all of Earth Science is my passion. This journal is where I write about things I have too little time for on-air. I try and write it for Junior High level and up.  This blog is metric (like the rest of the world and all of Science), and almost everything I write about has to with Earth Science. Peer reviewed science, not the junk science that seems so pervasive on the net.

My career in TV began in Oklahoma City in 1980, and I’ve worked in Tulsa,, Orlando, Birmingham and Huntsville AL. We now live in Salisbury, MD on the beautiful Delmarva Peninsula, with it’s challenging and fun weather! I’m a full member of the American Meteorological Society, and hold the AMS CBM seal as well as being the past chairman of the AMS Station Science Committee. I’m also a member of the International Asoc. of Broadcast Meteorologists (IABM). In 2020 I was honored to be named a Fellow of the American Meteorological Society.

Getting students of all ages interested in science is very important to me. I also teach an introductory course on weather and climate at Salisbury University. Many pictures on this site are from two weeks I spent on a Russian vessel in the High Arctic of Canada and Northern Greenland, in August of 2007. Climate change is very visible in the Arctic.

One of the reasons I started writing this blog, is the huge amount of disinformation online about real science and especially climate change. In spite of what you may have heard, scientists are no longer debating whether the Earth is warming, or if humans are causing it.

The definitive answer to both questions is settled. It’s yes.

In January 2010 I was a guest of the National Science Foundation on a tour of the Science underway in Antarctica. On Monday, January 11th, I became one of only about 5 thousand humans to have ever stood at the South Pole. Seven months later, I found myself on top of the Greenland ice sheet where scientists were recovering an ice core that will give us climate information back 130,000 years!

What we do as a people about climate change is a political question. The reality of the problem is a scientific one. I will stick with science here and steer away from politics.

If you are a teacher needing information, do not hesitate to email me. I may not know the answer, but I probably know someone who does!