Mannen (The Man) is one of Norway’s most threatening mountains. During the past five years its activities provoked 11 evacuations of the valley’s inhabitants and train disruptions along one of the country’s most scenic routes. In Norway, the responsibility for early warning of rock-slope failures and connected necessary actions lies with the Norwegian Water and Energy directorate (NVE). The concern is continuously increasing activity in a relatively small rock mass (130,000-180,000 m3), which is riding on a huge deep-seated rock-slope instability. It experiences seasonal acceleration phases at the end of each summer, when local ground temperatures exceed 0°C.

In 2008, the Geological Survey of Norway (NGU) classified the unstable rock slope at Mannen as a high-risk site, due to deformation rates of 2-5 cm per year of an approximately 5 million m3 rock mass, with potentially severe consequences. The latter may result in the damming of the Rauma river with subsequent outburst floods, threatening the touristic town of Åndalsnes. Hence, the instability is continuously monitored by NVE. The sliding surface of the rockslide crops out at the transition of the steep rock slope to the plateau-like top of the mountain. Twenty metres of absolute displacement demonstrate a long history of gradual sliding activity (Photo 1). Photo 1: Top of Mannen mountain, with the name giving rock formation above the 20 m high backscarp of a c. 5 million cubic metre rockslide.

Extensive rockslide deposits in the valley, more than 1200 m below the top of the unstable rock mass, have been mapped within a recently published study in The Holocene (Hilger et al. 2018). These deposits point to a high rate of pre-historical rock-slope failure activity from this slope (Photo 2 and Fig. 1). The deposits from six to nine catastrophic rock-slope failures have been dated based on Quaternary geological mapping, stratigraphical geophysical analyses and terrestrial cosmogenic nuclide (TCN) dating. Photo 2: View from the top surface of the rock-slope instability down into the valley. The forest hides chaotic boulder fields of deposits representing 6-9 pre-historical catastrophic rock-slope failure events. 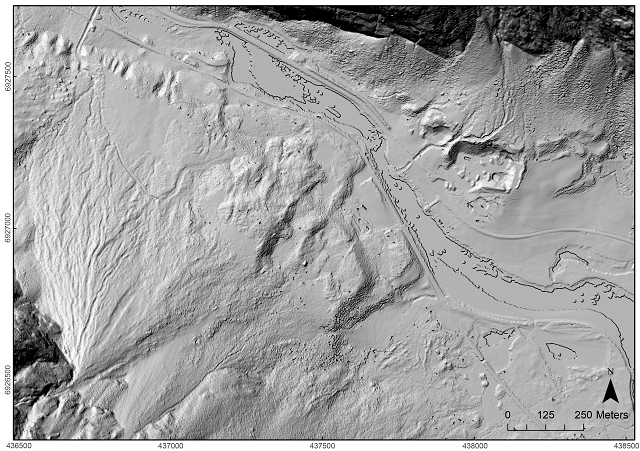 Figure 1: Hillshade of high-resolution (1m) LiDAR data of the valley floor below Mannen (cf. Photo 2). The morphology of several rock-slope failure deposits and some erosional features are well visible.

The results suggest Mannen has experienced two periods of ‘stability crises’ with multiple catastrophic rock-slope failure events from the same slope. Three events (numbers 1-3, Fig. 2) occurred within a time span of 2000 years between local deglaciation (12 ka) and the sea-level drop below the elevation of the valley floor below Mannen (10 ka). This fits well with a previously observed peak of rock-slope failure activity introduced by debuttressing and paraglacial stress release, closely following deglaciation.

A second stability crisis with at least three catastrophic rock-slope failures (numbers 4-6, Fig. 2) was dated by 11 TCN samples with indistinguishable ages within their 1σ uncertainty. Considering MANN-26 as an outlier, the mean ages of the events 4, 5 and 6 are 4.93 ± 0.30 ka, 4.96 ± 0.33 ka and 4.94 ± 0.31 ka, respectively. The results suggest that after the Holocene thermal optimum, about 5000 years ago, several clearly distinguishable rockslides failed within less than 200 years. A similar scenario in Loen, western Norway, killed 74 people in total, when the same slope failed up to seven times between 1905 and 1950, causing disastrous displacement waves in 1905 and 1936. Figure 2: Quaternary geological map of the valley floor below Mannen with the locations and results of 13 samples analysed for the terrestrial cosmogenic nuclide 10Be. The map shows the same extent as Fig. 1.

The timing of the mid-Holocene stability crisis at Mannen suggests that climatic components were the major driving factors destabilising the rock slope, additionally to the structural geological preconditions. It coincides with a period of increased water availability (precipitation and snow melt), that most likely destabilised the highly fractured rock slope at a time of minimum permafrost distribution.

Today, the top of Mannen lies at the lower boundary of the regional permafrost distribution. What may happen next is difficult to predict. However, considering that this slope has engaged in a period of rumbling twice, both during or after periods with increasing temperatures, we should pay attention. Another aggravation for Mannen is the increased frequency and volume of precipitation and higher volumes of snow melt.

This study is part of a PhD project by Paula Hilger (UiO, NGU) with supervision of Reginald L. Hermanns (NGU, NTNU), Bernd Etzelmüller (UiO) and John C. Gosse (Dalhousie University, Halifax). The over-arching CryoWALL project is financed by the Research Council of Norway to the University of Oslo, NGU, the Technical University of Munich and the Norwegian public roads administration.