The Burgess Shale – its all down to landslides!

The Burgess Shale is probably the World’s most famous assemblage of fossils, made famous in particular by Stephen Jay Gould’s book Wonderful Life. In a nutshell, the shale contains an extraordinarily well-preserved collection of Cambrian marine fossils, now generally considered to be 505 million years old. The morphology of the animals is generally somewhat extraordinary: 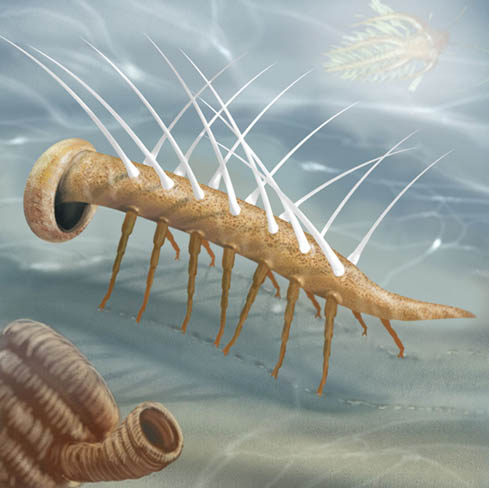 Walcott Quarry, the site at which the Burgess Shale is exposed, is located in British Columbia in Canada. Whilst studies over the last century have, understandably, focused on the fauna of the deposit, in recent years there has been a growing level of interest in trying to understand why this assemblage of fossils has survived in such a remarkable state of preservation. Earlier this year, Gabbott et al. (2008) published a paper that examined the mudstone in which the fossils are located in order to try to understand better the conditions in which the fossils were able to survive. Interestingly, a key factor appears to the occurrence of “mud-rich slurries” that buried the fossils rapidly.

Preservation of intact marine fossils requires that a number of conditions are met. First, of course, the organism needs to be buried in order for it to be preserved. This burial cannot be too dynamic or the organism will be broken up, but must be rapid to avoid decomposition. Once buried, the conditions must prevent decomposition. Finally, the material must survive intact the long geological time period to the future – this will probably include burial to considerable depths, where there are both high pressures and high temperatures – the Burgess Shale is thought to have reached depths of 10 km below the sea bed, in which temperatures would have been in the order of 250-280 degrees C! In many ways it is amazing that so many fossils survive.

Gabbett et al. suggest that in the case of the Burgess Shale, burial occurred in a series of fluid debris flows that came down from the slope, which is thought to have been about 160 m tall. These mud slurries buried the fauna almost instantaneously, smothering them without causing them traumatic damage, although some movement during the landslide is likely. Burial was sufficiently deep (tens of centimetres) that they did not float free as gases formed during decay accumulated and were also below the surface layers of sediment, in which large amount of bacteria are active.

Gabbett et al. conclude that it was this rapid but non-traumatic burial that allowed such remarkable levels of preservation of the fossils, rather than chemical processes that inhibited decay. An interesting case in which landslides have proven to be a good thing (apart from the organisms themselves of course).

The Burgess Shale – its all down to landslides!