Catastrophic rockfalls in the Middle East

The terrible landslide at El Doweiqa in the Manshiet Nasser slum in Cairo (see earlier posts here and here) continues to shock. The death toll has now reached 45 people, with many more still buried in the debris. News reports suggest that there is growing dissatisfaction with the response of the authorities in Egypt. To be fair, relatives in disasters such as this are often very frustrated at the speed of the response – for understandable reasons. Excavating blocks as large as this whilst keeping the rescuers safe is a terribly difficult task.

However, of interest is the similarities between this disaster and one that occurred in Yemen on 28th December 2005. This landslide occurred at the village of al-Dhafir, about 50 km from the capital Sanaa. As with Manshiet Nasser, the landslide occurred as a result of the collapse of massive bedrock blocks from an escarpment. Again, as in Cairo, houses were utterly flattened by the landslide. This disaster killed 65 people. The images below of the disaster are from AFP via the BBC. The similarities to the Cairo event are clear: 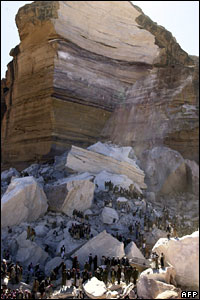 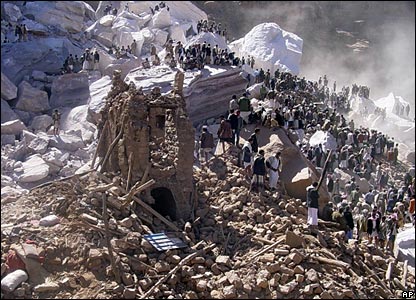 I have very rarely seen landslides like this from other parts of the world. What is unusual is the size of the blocks (huge) and the mechanism of failure (toppling). This combination is not seen very frequently. So why does the Middle East suffer this type of unusual failure?

I suspect that the answer lies in an unusual juxtaposition of geology and climate. The geology provides a strong rock with a simple joint set in which the spaces between the joints are large. This allows rare detachments of very large blocks. If the rock was weaker or more closely jointed then the blocks that fall off would be smaller – i.e. there would be more falls, each of a lower volume. The climate element comes from the aridity, which means that failure is not triggered by the pore pressure effects seen elsewhere. An additional factor is probably that the dry climate means that the rate of weathering is low. So a wetter climate would probably trigger more failures, each of a smaller volume.

The reports in Cairo suggest that the local people feel that water (or sewage) leaking into the rock has been a factor. This may be the case, although the mechanism of failure is not obvious. I would be interested to know if the slope has been quarried either officially or unofficially. For example, have pieces been hacked out to be used for building stone? Or have pieces been detached to create space for more buildings? This is so often the cause of rock slope collapses in inhabited areas.

Catastrophic rockfalls in the Middle East