I have been trying to work out from the press reports the death toll associated with the landslides in Indonesia on 26th and 27th December. These appear to have been shallow but large failures on deforested slopes, triggered by heavy rain. The best that I have been able to come up with to date is as follows:

26th December: Karanganyar District: 61 fatalties. This appears to include a single landslide that killed about 36 people whilst they were having a meal to celebrate the clearance of an earlier landslide. This is the landslide (Picture from the Boston Globe): 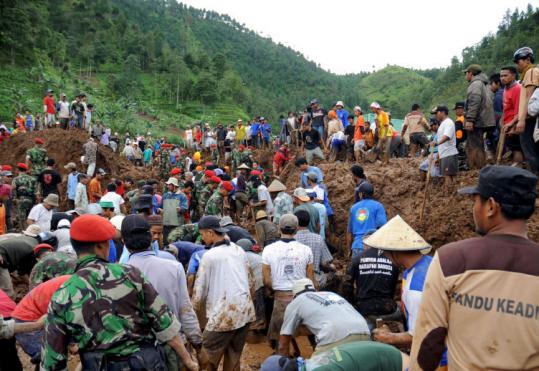 The intensity of the rainfall is well-illustrated by the NASA TRMM data for this area (this is the 3 day accumulation as indicated on 27th December 2007):