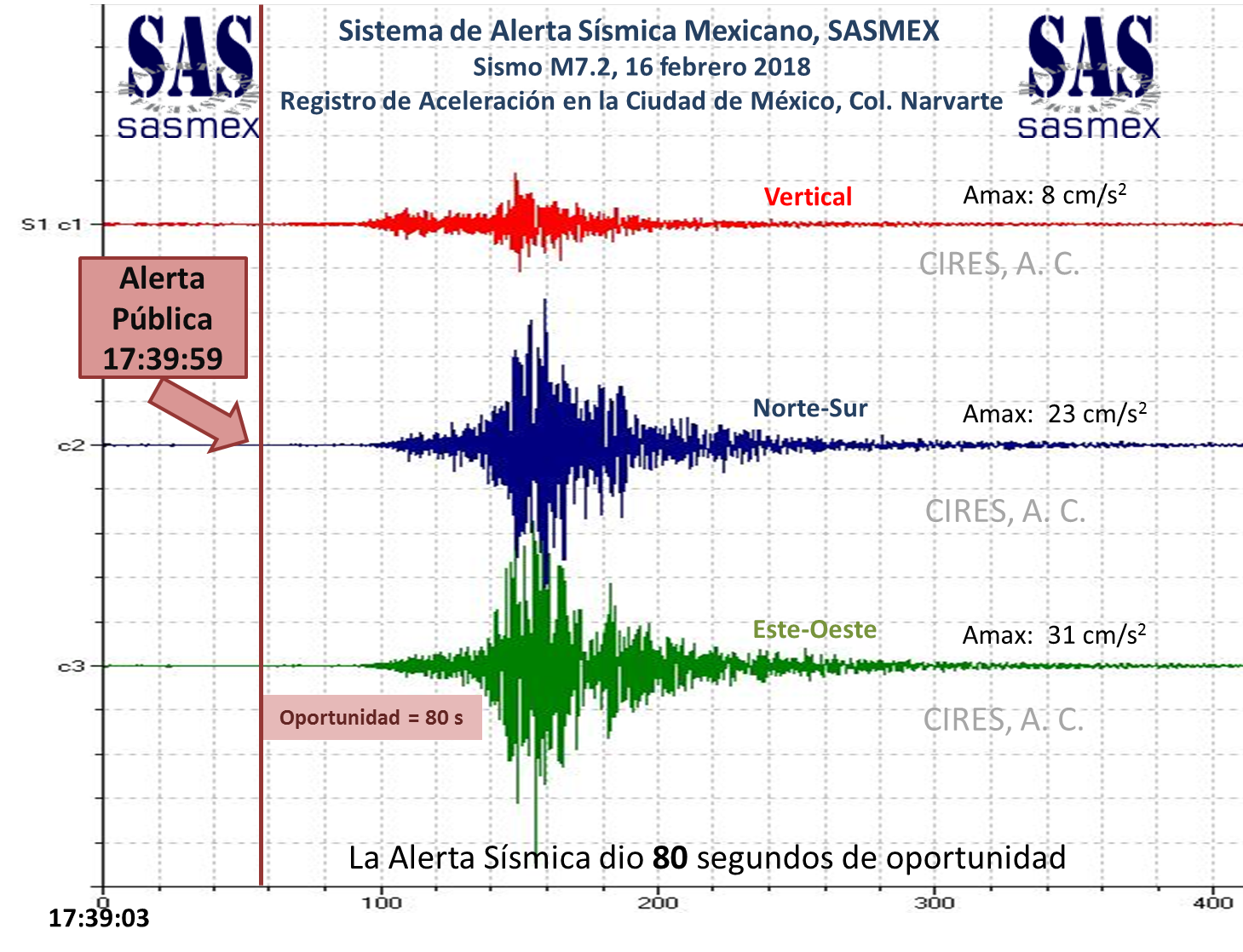 Late on Friday afternoon, February 16, during the Chinese New Year street fair in la Ciudad de México, the tight hold between the North America and Cocos plates failed, the fault slipped, and the Pacific coast of Oaxaca lurched around a meter out toward the ocean. Within six seconds, the profound ripple this let loose through the crust heaved the Huazolotitlán seismic recording station westward as well, followed shortly by a station in the small town of Mártires de Tacubaya, then one after another in the vicinity of southwestern Oaxaca. While residents of these rural towns would already have well known the earth was quaking beneath them, this confirmation by the network of dedicated seismometers was the first signal to the distant world that the Earth was moving. Eight seconds after their first seismometer detected the earthquake, the Seismic Alert System of Mexico issued its first alert of strong ground motion at 17:39:53 local time, just 11-14 seconds after the fault had begun slipping. Six seconds later, dozens of stations throughout the region were registering shaking from at least the P-wave, and the SASMEX system issued a broader alert recognizing a very large earthquake. Instantly, thousands of civil warning alarms sounded throughout Mexico City, some 366 km from the coastal epicenter but prone to anomalously strong shaking from distant earthquakes. It would be another minute and eighteen seconds before the rolling elastic surface waves walloped the city—an extraordinary amount of time for people to prepare and brace themselves. In fact, the alarms appear to sound for only a default duration of one minute, so their blaring subsides into silence about 10-20 seconds before substantial shaking sets in in the capital.

Look what people did withtheir 78 seconds:

A cyclist captures the full event, giving the best visual and aural timeline of the whole episode. Note the duration of the warning and the delayed onset of the shaking, which ends up being quite strong. Also note the absolute patience of the drivers on the road, who stop in preparation for the quake without honking or fighting.

On the street market in Chinatown, people stand calmly outside of shops or filter down the road to a wide open intersection, where a huge crowd waits in impressive quiet for the quaking to begin, which it certainly does with convincing strength, heralded by alarmed crowd noise and a thorough narrator.

Around the corner another massive crowd has gathered by the time the alarms finish their minute, and although a bit of vocal alarm wells up as the ground starts swaying, urges of “¡Tranquilo!” do seem to keep any panic in check.

Similarly, at another crowded street corner people use the held-up fist, widely adopted during the September 19 search-and-rescue phase to quieten crowds in the hunt for survivors of building collapses, to keep screaming and panicking in check.

I find this urge both fascinating and valuable, as maintaining quiet helps to both 1) mitigate confusion and chaos, and 2) improve everyone’s situational awareness: Which buildings are creaking? Where is glass breaking? This vast refinement of everyone’s sensory input during ground shaking is a marvelous luxury of earthquake early warning.

These office workers illustrate another potentially life-saving luxury of the early warning system, using the time to don hard-hats, text loved ones, and get into or at least near safe positions for when the building starts to rock.

Meanwhile in a rather more dire position atop a high-rise building construction site, this construction crew is radioed a warning with instructions to remain where they are and brace themselves for the pretty terrifying ride they’re about to take.

Finally one of the more threatening looking scenes from this earthquake shows a collection of residential high-rises that appear to have been heavily damaged in the September quake(s). As the big undulating surface waves roll through after the alarm has stopped, the ambient sound ominously increases with people vocalizing, dogs vocalizing, and the general roar of buildings being shaken, including the horrifying swaying and minor crumbling of these towers.

A big selection of other footage of this earthquake can be found in this YouTube playlist I assembled: https://www.youtube.com/playlist?list=PLIP97pScAueOnU4IPnoZcC_gzLWO-_Fgf

Despite some wariness of a frankly outdated early warning sytem, which for a while was lulling the populace into apathy because it is insensitive to the magnitude or intensity of an incoming quake, the residents of CDMX appear to have taken this alert very seriously, no doubt thanks in large part to the pair of terrifying and eerily coincidental earthquakes in September last year. Recent experience with such traumatic ground motion is likely to make everyone take a seismic alert much more seriously. It appears that Mexicans recognize that the successes of the system make it worth heeding every warning. In some ways their unfortunate series of earthquakes in the past few months have been ideally timed to reinforce the warning systems scientists and the government have worked to put in place.

Meanwhile, efforts are ongoing to improve the warning system in both its response time and its coverage so that cities close to the coast may be better warned of their own quakes, as well as Mexico City itself.