7/22/2020 GFS
The GFS [a U.S. national weather model] is crushing it out here in the Arctic. In the past weeks we’ve had a couple of key operational days when the models diverged in their weather forecasts. Will it be socked in with overcast clouds and fog, or will there be a wide band of clear sky in our area? In both cases the European models we use out here for operational planning indicated the former, while GFS predicted the latter. These disagreements have effectively set up a periodic competition of the models, which specifically examines how these models perform in a remote region with few observations for data assimilation.

Today, as with a similar day a couple weeks ago, GFS has hit it right on. I’m standing here in the middle of a beautiful, clear-sky day on the sea ice in the Fram Strait. Sun is reflecting off of perfectly still melt ponds. We have tethered balloons flying, drones in the air, and numerous helicopter missions all buzzing around, in addition to many other activities on the ice. We are out here collecting a wealth of information on clouds, the atmospheric structure, surface energy transfer, sea ice processes, and more, all to help evaluate and improve our predictive models. While it certainly still has its deficiencies, lately GFS has done a great job of hitting on some uncertain forecast conditions. 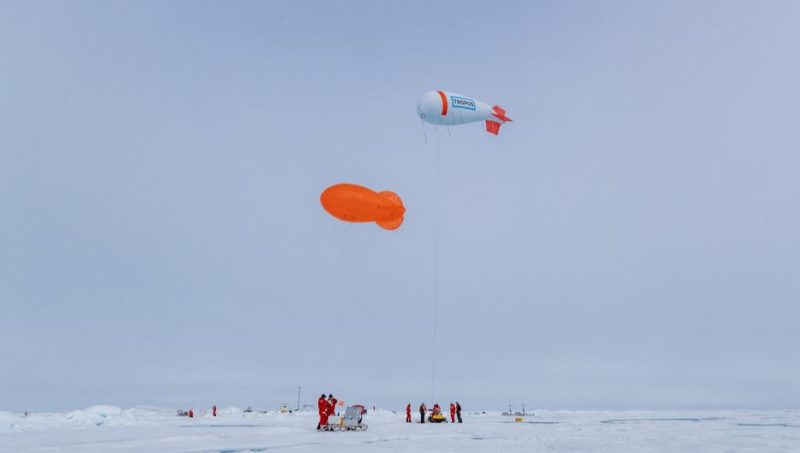 7/23/2020 A Walk in the Desert
I like clouds. I’m here, in part, to study clouds. And there is certainly no shortage of clouds in this area or in the Arctic summer in general. Fogs, overcast, grey…. These things abound. But occasionally out here you get one of these spectacular clear sky days. Bluebird. That was today. Make sure you have a brimmed hat and sunglasses, and slap on a double layer of sunscreen. It’s a day to enjoy outside with great visibility and many smiles on faces. In the afternoon I had a little time window to join Verena and Melinda in scouting a new trail through the middle of the floe and right through the central core of the Fortress. The most rugged terrain around. Igor wanted to set up one of his seismic stations out in that sector and we need a new access route to one of the ice coring sites. So we walked off into the Fortress in the blazing sun. And how spectacular! Up and down, up and down, the surface undulates in every direction. Brownish with sediment and almost layered in nature. Ponds of water in the depressions, making all kinds of crazy meandering shapes. Strange ice crystal formations everywhere, glistening in the sun. Standing there and looking out across the surface I felt like I was in the slickrock of the Utah desert. They have similarly eroded and curved surfaces, with layers and sculptured forms that only nature can create. The blazing sun helped to solidify this link to the desert. I love the desert and such landscapes, and now to see this site and feel this energy here in the Arctic ice pack….. It is another of those defining moments. When the Arctic reveals a new side and takes me into a new state of wonder.