Postcards from a frozen icebreaker — Part 37

6/24/20 Sediment
The ice around us, at least on the Fortress, is filthy. In many locations it is brown with sediment. Many small rocks have been found, suggesting that this ice was initially formed as land-fast ice along the Siberian Shelf. A recent satellite radar image shows that this floe is somewhat different from the ice around us. It is more ridged and with more extensive pond formation. I wonder how much these two go together. Higher ridging will collect more snow, which will lead to more melt water. And the large ridge features keep this melt water trapped leading to the extensive ponding that we see. The ponds on the other side of the floe, over on the so-called “first year ice” side, are smaller and more like those I’ve been around in the past. This MOSAiC floe appears to be quite unique and it continues to reveal an interesting story….. now through sediment that emerges with the progressing melt. 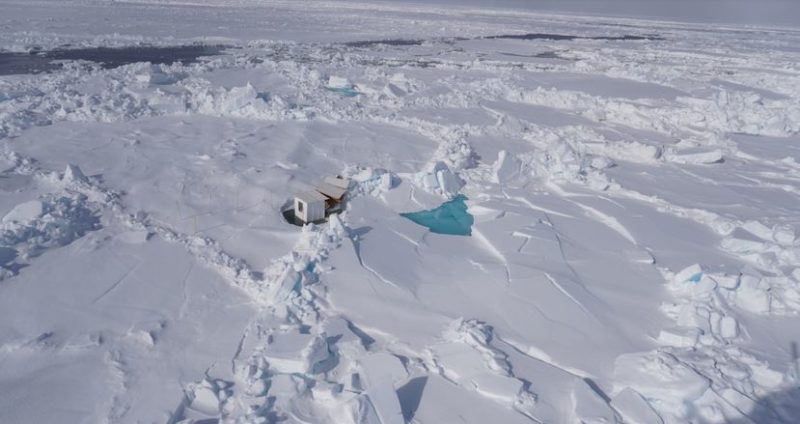 6/26/20 Walking Therapy
I’ve been getting frustrated and exhausted lately. So many tasks to get done to get everything set up and fixed. Added responsibilities in being the co-cruise leader. And there are not as many people here now that they understand how the system works, both from the scientific design standpoint and from the practicality side of working with the ship and on the ice. So there has been some extra load on some of the leaders recently. It’s been wearing on me. Routinely getting 6 hours of sleep is apparently not enough for me during these days of long work on the ice. I’m worn down and was getting a bit irritable. To help straighten out my mindset, I went on a bit of a walk today.

A journey out to the First Year Ice side of this floe. It’s got a different character than the side of the floe to which Polarstern is now moored. It’s flatter, fewer ridges. Not as much sediment on the surface. Whiter. And still very ponded. Some old trails are now about 1-foot deep in pond water. On this journey we found a place to park one of our flux sleds. This will be a nice contrast with the measurements that are made at our tower over in the rougher second year ice area. Depending on wind flow direction, the measurements could be significantly different. Our walk-about extended through many other zones on the floe, partitioned for different science. A team of scientists at the ice coring site, made up of first and second year ice. Photo: Lisa Grosfeld/AWI

It started by the Remote Sensing area where a couple of very early career scientists have done an amazing job of getting three different microwave systems set up to look at the surface to teach us how some satellite sensors work. Then further on is Igor’s seismic stations to measure seismic signals in the thick, rugged core of the Fortress. Igor is a great character; one of those people that has seen many years in the Arctic, and I think he is sometimes amused by all of the newbies out here. A little further and we pass by the first year ice coring site where a big team comes on Mondays to get many cores for many reasons…. Ecosystem studies, physical processes, gases, etc.

Beyond that site and out behind a huge ridge we walked a thin line of remaining “dry” snow spanning between vast melt ponds out to the albedo lines. Routine transects along these lines are used to monitor the evolution of surface reflectance over many surface types. It’s a great way to characterize how the ice is changing, melting, transforming. Then along that old path that went through a 1-foot deep melt pond. And over to where the drone people launch their aircraft to fly over different ice and liquid water surfaces. Finally, back to the ROV site where today the ECO team was recovering a net to collect critters from the ocean to help understand how biology interacts with this changing Arctic scene. What a great walk around the ice. It really brightened my mood, and was a great way to take a bit of a load off. Walking therapy for the mind