Over the past few mapping seasons, I have developed a great appreciation for shales of all colors and chemistries. While this humble lithology typically does not support impressive topography and is frequently associated with infertile and unproductive valleys, its role in controlling patterns of rock mass deformation are visible everywhere in the areas I work. This effect reaches beyond tectonic processes; the landslides written about in an earlier post (and an even earlier post) are the result of appropriately located shale layers within sections of harder sandstone. Because of the armoring effect of the sandstone, the shale is involved in topography and subjected to stress fields that it could never create on its own and cannot support, leading to large-scale slope failure in which the sliding block of strong rock remains intact. Somewhere on the AGU Landslide blog, I came across a reference to another type of rock strength-controlled, intact landslide I had never heard of–the Toreva Block. Like the Appalachian Valley and Ridge giant landslides, it is possible to replicate Toreva-style movement with contrasting model materials that represent failure-prone shale and much stronger topography-supporting lithologies, like sandstone or basalt. These slide blocks below the Echo Cliffs in northern Arizona are not the largest or most dramatic Toreva features, but the displacement and rotation of the blocks is easy to see. Layering in the blocks is nearly vertical, while it is very gently dipping on the source cliffs. The combined length of the blocks is about 2,000 ft (660 meters). The two slide blocks at the base of the model cliff show a similar pattern. The blocks have slid down and also traveled laterally away from the cliff line. Two disaggregated slides partially bury each of the blocks. In this perspective on the blocks from the first image, the steep dip of their layering is obvious. In other slides along this cliff line, it is easy to match the layer pattern in the slide blocks to the layering on the intact cliffs.
The Toreva Block style of slide was named by Parry Reiche in a great 1937 paper that is worth a read. Toreva is a settlement at the edge of Second Mesa on the Hopi Reservation at the edge of the Colorado Plateau in northern Arizona. Sedimentary layering on the intact parts of the mesa is nearly flat-lying, but the mesa is surrounded by elongated blocks of the same layering that tilt back towards the intact mesa but are otherwise intact, despite being displaced from the mesa itself. The type locality Toreva blocks are actually quite challenging to see in Google Earth (to me, at least!). The blocks are very elongated, and more than one block can be seen moving outward from the cliffs, suggesting some sort of retrogressive failure. If I saw a pattern of this type and physical scale in a highly vegetated area, I would probably initially misinterpret it. The long block at right, with leader line from “Toreva,” is 1,600 feet (487 meters) long.

Reiche’s paper recognized that these blocks were intact landslide masses that moved on curved failure surfaces, causing the tilting to develop. Their movement was facilitated by the layer sequence–strong sandstones, the mesa caprock, resting on a thick section of weak shale. There are many such displaced blocks on mesa edges in the region, and I think the type locality blocks are actually among the hardest to visualize because of the appearance of the landscape, soil color, etc. The Toreva style of movement can be produced in a physical model by producing a similar stratigraphy–a strong, cohesive sand mass, carved to a near-vertical face, sitting on top of a thick, weak section of microbeads:

Rotation and transport distance of the model blocks is not as extreme as in some real examples (typical of granular models), but the overall function is the same. This type of slide could not be produced without the microbeads, much like the real slides depend on the presence of the thick, weak zone beneath the strong caprock. The weak rock, especially when steepened and undercut, creates the appropriately shaped failure surface and allows the slide block to move without disintegrating. The cohesion of the strong portion of the model allows it to be cut away to show the tilting of layering in the slide block. 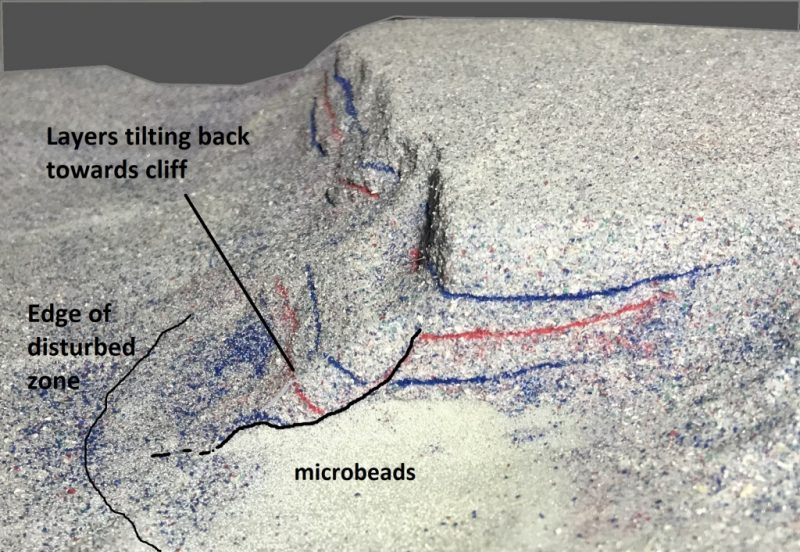 The cohesive materials used for the cliff-forming section in the models allows a cutaway view to be carved into the model. Just above the word “microbeads,” the back-rotated beds in the slide block are visible. The black line traces the failure surface, which arches over a small thickened “lump” of microbeads. Microbeads and debris “splashed” beyond the edge of the disturbed zone when the slide moved, as marked.

One trial produced a concave failure surface on the cliff line itself; the result was a hollow scar on the cliff face with an overhanging lip. This allowed the block to rotate fully 90 degrees; its flat surface can be seen in a freeze-frame from the video. In this model, the block rotated 90 degrees, leaving a concave scar on the “cliff.” The once near-vertical cliff surface is now horizontal on the slide block. I’m not sure if a geometry like this is possible within an actual rock mass, but it shows the ability of contrasting model materials to create extreme results.

Movement of the model slide blocks kicks up a significant amount of microbeads ahead of the moving block. I don’t know if the real slides accrete a mass of shale at their leading edge during emplacement. The model cutaway makes it possible to see where the failure surface warps and arches across a mass of displaced microbeads during movement; again, I don’t know if this is present in the real features.

I think I’m probably most interested by how these blocks can move, flex, and rotate without completely crumbling. Obviously once the microbeads fail and start moving/flowing, they present little friction to the moving mass. I presume the shale produces the same effect on the real features, presumably due to its behavior when saturated or at high pore pressure.

In the real slides, the blocks create an outcrop repetition of the cliff-forming section. Gently blasting the models with air to “age” them produces the same effect: This top view of an “aged” cliff and Toreva system shows the pattern of stratigraphic repetition that appears when a large slide block is visible at the foot of the cliff. An arc of displaced white microbeads can be seen at the outside of the blocks. Note that small tear faults have formed within the block. These widely spaced blocks create a similar pattern, and the disaggregated slides that bury parts of the blocks make it unclear to what extent the blocks are continuous across the foot of the cliff. A notable difference in the models and the real thing is jointing; if the model material could be pre-weakened at spaced intervals, it might be possible to create longer failures along the cliff line (in other words, blocks that are much longer than they are tall). Two Toreva blocks at the foot of Vermillion Cliffs, Arizona, northwest of the first image in the post. These are tougher to see, but the light-colored caprock bed at the top of the blocks can be matched to the continuous caprock bed at the top of the cliffs. The blocks are big–their combined length is about 7,000 feet (2,133 meters). I don’t know what’s going on with the blue-gray material at the toe of the blocks–is this displaced shale that has been raked up by block emplacement? This Echo Cliffs block is one of the easiest to visualize. Note here that the layers of the cliff line already dip towards the top of the image. This effect makes back-rotation a bit tougher to see if you zoom in and tilt, but the layering in the block is definitely more steeply tilted. Tilting results from movement of the block along its curved failure surface (see the conceptual diagram near the top). Regardless of how the beds dip initially, if the block moves across sufficient curvature, back-rotation will result. The block seen here is about 4,300 feet (1,310 meters) long from end-to-end.

As an east coast geologist, I wonder what I would think of these features if they were tree-covered and highly weathered or eroded. Given their physical size, abrupt dip change, and sense of section repetition, I would probably try to come up with a tectonic origin if I didn’t have quality digital topography to look at. As far as I can tell, this style of slide is minimally represented on the east coast for reasons of bedrock geology, relief, and recent tectonics and climate, among other possible reasons. The only likely example I could find is in the Tennessee River Gorge above Mullens Creek in Prentiss Cove State Park. The sole result of my eastern United States Toreva block hunt. I admit that it was far from exhaustive (and hindered by lacking high-res surface imagery), but there are limited mesa or shallow cuesta features that might host such slides. The mechanical arrangement is reasonably good here, as obvious cliff forming beds (sandstone) serve as caprock above a much weaker zone. I can’t tell much about rotation from the image, but I think the bedding visible in the small slide block is oriented differently from the cliff beds. Mullens Creek is the stream at right; it flows through Prentiss Cove State Park. The block is about 1,000 feet (300 meters) long. As usual, not much to see without a LiDAR overlay.

There is plenty of good reading about these features online. Below are a few good links, including one about Grand Mesa, Colorado, where lava flows atop weaker sediments have set the stage for Toreva development.

A few Google Earth images with coordinates are shown below. The Mile 218 Toreva block in the Grand Canyon is at the center of the image. The layers in the block tilt down to the right; the intact layers on the cliff wall at right are essentially flat-lying. This block appears to be at the southwest end of a lengthy and dissected block system. This and other Grand Canyon slides are linked from https://web.mst.edu/~rogersda/cp_megalandslides/toreva,_az.htm. 35.8570N 113.3027W. Grand Mesa, Colorado blocks are at center; the elongated blocks tilt down the left, towards the source cliff and mesa surface. Here, the strong caprock is a basalt flow, not a sedimentary horizon. This system is described in the usda link above. 39.0488N 108.0687W.