Pope Francis and the encyclical on the environment and human ecology

“The urgent challenge to protect our common home includes a concern to bring the whole human family together to seek a sustainable and integral development, for we know that things can change”  —  Pope Francis, Laudato Si’ 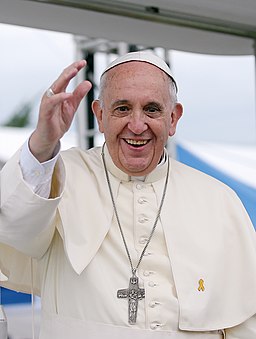 2014 Pastoral Visit of Pope Francis to Korea, from Wikimedia Commons

While in attendance at Dr. Anthony Leiserowitz’s talk at The Franklin Institute (see blog post), I heard Dr. Leiserowitz share how he read Pope Francis’ encyclical Laudato Si’ on the environment and human ecology. He encouraged all of us in the audience to read this document which focuses on stewardship (the document has the subtitle “On Care for our Common Home”). This is not the first speaker I’ve heard tell an audience to break the silos of religion and science and to look at this document, no matter what your background and beliefs.

Fast-forward just a few days later, and my husband is in attendance at the BCCE conference at the University of Notre Dame. What did he find for sale in the campus bookstore? Copies of Laudato Si’. He brought me home a copy, and it seemed appropriate to make this my reading on a flight to Arizona to visit the Grand Canyon. I also found copies available for free online and as a downloadable PDF at: https://laudatosi.com/watch

For those not familiar with the term “encyclical”, it comes from the Greek word meaning “circular” – in this case, it is a letter written by the Pope meant to be circulated through the community (community defined as the clergy, the Catholic faithful or other “men of good will” outside the Catholic church). A papal encyclical is one of the highest forms of communication by the pope and usually deals with some aspect of Catholic teaching, such as clarifying, amplifying, condemning or promoting one or a number of issues. Pope Francis has stated that this encyclical, his second letter, is for everyone, not just for Catholics. No previous pope has ever dedicated an entire encyclical to the environment, although many popes have mentioned environment/human connections – Pope Paul VI shared that ecological concern is “a tragic consequence” of unchecked human activity, Pope Benedict XVI urged us to recognize that the natural environment has been gravely damaged by our irresponsible behavior… the list goes on.

The Laudato Si’ website has a video by Bishop Robert Barron on his early thoughts/interpretations of the Pope’s words in the encyclical, released on May 24, 2015.

Rome Reports also presents an overview (~4 min) of the encyclical.

I have to wonder if the Pope’s training and work experience as a chemical technician has played any role in determining his views of human/environment connections. The first chapter of Laudato Si’ reads as if a scientist wrote it, discussing topics from fossil fuels and climate change to accessing safe drinking water to the loss of biodiversity, all placed in the context of social justice. I’m sure if I provided my students this first chapter, without telling them where it came from, they would have no idea these are the words of Pope Francis (I know Dr. Katharine Hayhoe has Laudato Si’ as part of the reading list for one of her classes – I wonder what her students think!).

I won’t provide a review chapter-by-chapter, as each person reading this document approaches the Pope’s words with a different background and through a different lens. Be prepared for the Pope’s comments on integral ecology, sustainable development, technoscience, anthropocentrism, policies for the common good, ecological spirituality, and more.

The content of this encyclical matches very well with the surprise TED Talk by Pope Francis in April 2017, titled “Why the only future worth building includes everyone.” I have shown this video to my students, as the Pope’s message connects to the science and society themes of my courses. Specifically, the Pope has three messages: (1) we all need each other, none of us is an island, and we can only build the future by standing together, including everyone; (2) the growth of scientific and technological innovation should come along with more equality and social inclusion; and (3) the revolution of tenderness…Tenderness means to use our eyes to see the other, our ears to hear the other, to listen to the children, the poor, those who are afraid of the future. To listen also to the silent cry of our common home, of our sick and polluted earth. Tenderness means to use our hands and our heart to comfort the other, to take care of those in need. Wall at the South Rim of Grand Canyon National Park

Laudato Si’ has given me much to reflect upon, and I look forward to rereading this document in the future. Although I have found myself bringing more and more of the societal connection into my courses, making civic engagement and social justice not an “add-on” but an integral part of the instruction and engagement, I see that I still have room to grow. Specifically, I can make even more of an effort to help students see their own role in creating positive change for society and Planet Earth as a whole. The Pope’s words will stay with me as I kick off the semester, teaching multiple sections of a course titled “Climate, Energy and Our Future.”

Maybe students won’t end the semester with the love that I have for Earth and the environment (“love” that I found in a wall at the Grand Canyon rim!), but engaging them in some reflection and providing options for being agents of change is a start.

Articles on the encyclical Laudato Si’