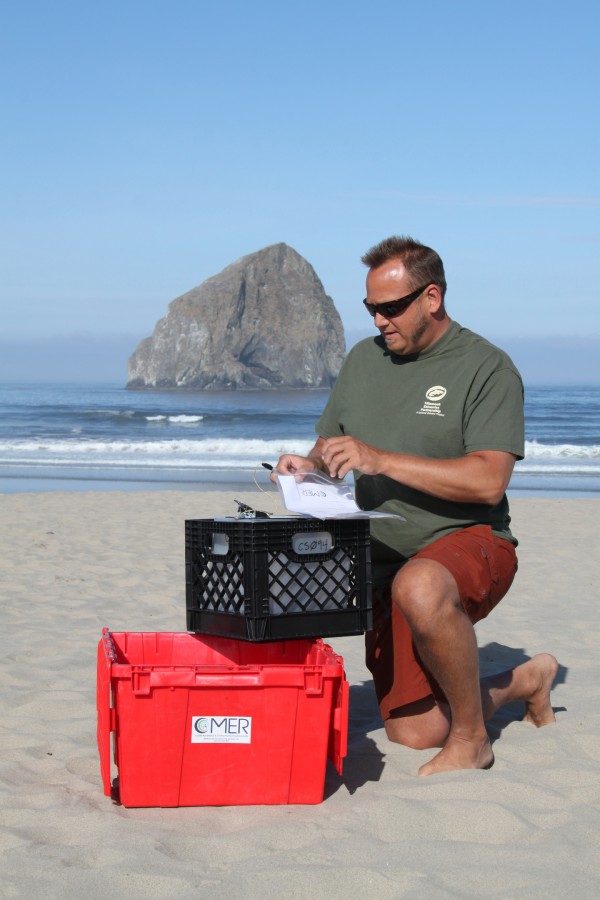 Although it happened four years ago, the disaster, and possible consequences, still generate questions from reporters, scientists, nuclear plant operators and the public, says Ken Buesseler, a marine radiochemist at Woods Hole Oceanographic Institution. He says he uses the disaster’s news focus to try to educate the general public about the science of radiation, including how at-risk people really are.

For example, Buesseler says people ask him whether sea star die-off on the West Coast of the U.S. is linked to radiation from Fukushima. In 2013, disease suddenly struck sea stars off the coast of Washington state. In a gruesome spectacle, the affected animals – commonly called starfish – melted away within days. By the summer of 2014, “sea star wasting syndrome” had been reported at 45 sites along the Pacific coast of North America from Mexico to Alaska.

“If radiation is the cause of sea star wasting, we would expect biological effects closer to the source. The sea stars should be wiped out along the coast of Japan, yet they aren’t,” says Buesseler, who does not study marine organisms directly.

He addresses news-driven inquiries such as these in four ways that other scientists can use, too.

“Fukushima is the hook,” Buesseler says, marking the uptick in questions. “We can take advantage of this event, to educate.”

Information at the time of the disaster was contradictory and unreliable, Buesseler says. On one hand, “people stopped listening,” when a few government officials in Japan and the U.S. sounded quickly dismissive about citizens’ concerns, Buesseler says. On the other hand, some websites advised against eating ocean fish, and swimming off the Pacific Coast of North America, he says.

Buesseler does not want to trivialize nonscientists’ fears. “There’s a time and place to be worried,” he acknowledges, because radioactivity can be dangerous at high levels, and it cannot be seen or felt. Yet given the low levels of radioactivity predicted to reach the West Coast of North America, he is not concerned. Because of the lack of good information on the Internet, Buesseler feels he needs to find ways to communicate to nonscientists why he isn’t concerned.

“People need the information to understand relative levels of risk and what we know,” he says. “Then people can decide for themselves.”

3. Use the news, but build a broader message

“The big message is ‘We live in a radioactive world, from natural and human sources,’” Buesseler says.

He uses a map to illustrate the relative levels of radioactivity in the world’s oceans, at 13 key sites. The primary source of radiation in the ocean—nuclear weapons testing during the 1960s and 70s—has been augmented in some areas by fallout from the Chernobyl disaster or other radioactive releases, according to Buesseler’s website, ourradioactiveocean.org.

Levels on the map range from 0.3 to 61 units (atomic disintegrations per second (Becquerels) of cesium-137 in a cubic meter of water). In comparison, the EPA drinking water standard is 7,400 units. When contaminants from Fukushima arrive on the West Coast, their concentration is expected to be well below 1,000 units.

4. Massage the message with metaphors

The first pulse of radiation reached the U.S. a week to ten days after the accident, Buesseler says. He detected it in the atmosphere off the coast of Santa Barbara, Calif. He explains that soon, the small amount of atmospheric radiation mixed in the ocean to undetectable levels, the same way it becomes impossible to see a single drop of dye in a bathtub after you mix it up.

The second wave of radiation is moving from Japan toward the West Coast of North America through ocean water, he says, mixing with ocean water similar to the way that turning on a faucet mixes water in a bathtub. This pulse is moving more slowly than the first, taking an estimated three to four years to travel across the Pacific. Buesseler has not detected Fukushima radiation from the second wave on the West Coast yet.

– Guest blogger Leslie Willoughby earned an M.S. in Natural Resources at The Ohio State University and is a student in the Science Communication Program at the University of California, Santa Cruz. She shares science news on Twitter. This post also appeared at the SciCom class blog, Out of the Fog–Emerging Science from California’s Central Coast.