The Amazon River is slowly stealing a 40,000-square-kilometer (25,000-square-mile) drainage basin from the upper Orinoco River, according to new research suggesting this may not be the first time the world’s largest river has expanded its territory by poaching from a neighbor. The rare conjunction could help researchers understand how river systems evolve and how the Amazon Basin grew to dominate the South American continent.

The 2,140-kilometer (1,330-mile) long Rio Orinoco rises on the western slopes of the Sierra Parima, a 320-kilometer long mountain range on Venezuela’s southeastern border with Brazil dividing the watersheds of the Amazon and the Orinoco. The Rio Casiquiare breaks away from the Rio Orinoco in the remote lowlands below the mountains, diverting about a quarter of the Orinoco’s flow south to the Rio Negro, a major tributary of the Amazon.

Although it looks like a tributary, the Rio Casiquiare is a rare distributary of the upper Rio Orinoco (left), flowing south to meet the Rio Negro in the Amazon River Basin, about 340 kilometers (200 miles) to the right of the image. The Casiquiare is about 90 meters wide where it splits from the Orinoco, diverting about a quarter of the Orinoco’s water. Eventually the Casiquiare will conduct the all of the flow from the 40,000-square-kilometer (25,000-square-mile) drainage basin away from the upper Orinoco and into the Amazon, according to new research.
Credit: Google Earth

The Orinoco, which drains 880,000 square kilometers (340,000 square miles) of Venezuela and Columbia, is the fourth largest river in the world by flow rate at its outlet to the Atlantic Ocean. The Amazon, which drains 6.9 million square kilometers (2.7 million square miles), is the largest river in the world.

The Casiquiare link between the Orinoco and the Amazon is the only such connection between two major river basins in the world and offers an opportunity to observe a river capture in progress, according to the authors of a new study in Geophysical Research Letters, a journal of the American Geophysical Union.

The new study indicates the Amazon will win this tug of war and could help scientists understand how the world’s largest river formed.

“The Orinoco and the Amazon are two of the largest rivers in the world, and the fact that there is this perennial water connection between them has puzzled people for a very long time, starting with early European explorers,” said Maya Stokes, a graduate student at the Massachusetts Institute of Technology and lead author of the new study. “A river capture in action is a rare and unique chance to observe this process that we have evidence for in the geologic record but don’t frequently get to actually observe.”

Connections between river basins are unusual and those that do occur are typically ephemeral connections during seasonal flooding. The rare permanent diversions in a watercourse which have been observed tend to be abrupt, like the Kaskawulsh River’s theft of the Slims River headwaters in Canada’s Yukon territory, which redirected the watercourse completely within days.

Stable connections are rarely observed because one watercourse usually wins capturing all the water for itself and leaving behind an empty streambed where the old course once ran, Stokes said.

The connection between the Casiquiare and Amazon rivers has existed for centuries, since at least the time of early European exploration. The Casiquiare fork looked so unnatural to eighteenth century European geographers that reports of the existence of the Rio Casiquiare ignited a great controversy. 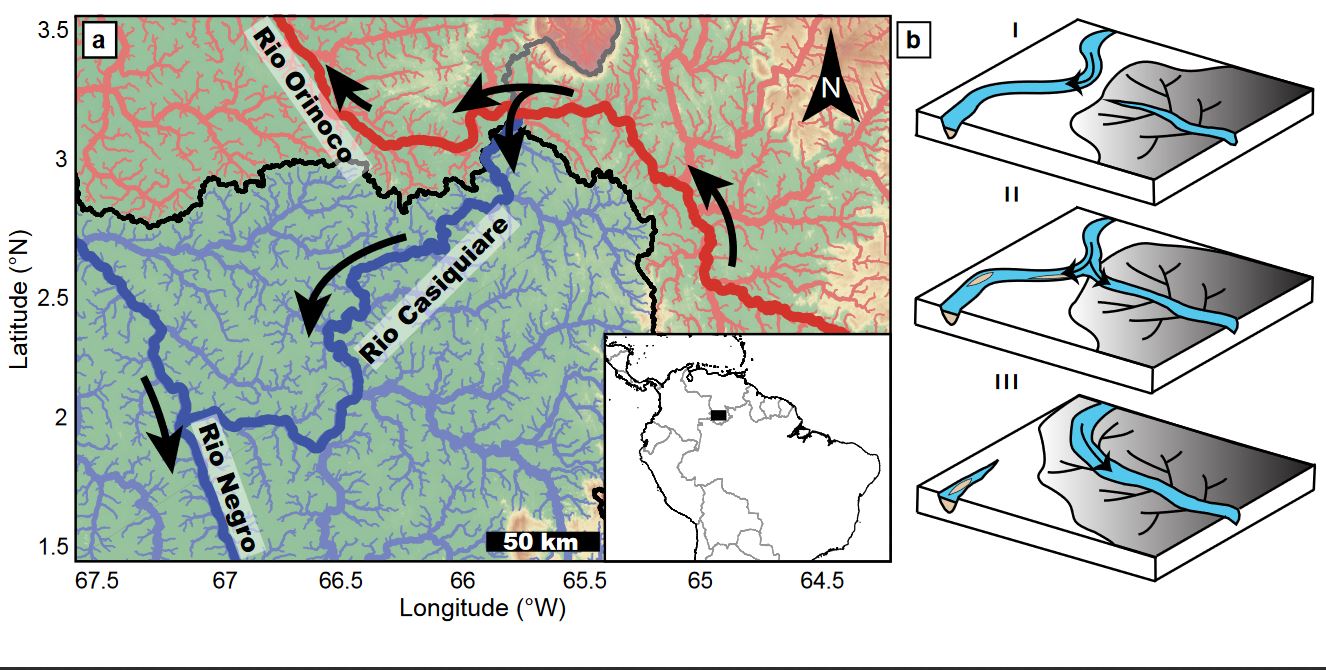 A black line marks the present boundary between the Orinoco River basin to the north and the Amazon River Basin to the south. A gray line shows where the new boundary will sit when the Rio Casiquiare completes the capture of the upper Orinoco. The cartoon to the right depicts the hypothesized capture process: (I) Pre-capture, (II) present bifurcation, and (III) future complete capture. Shading denotes the Amazon basin.
Credit: Maya Stokes, Samuel Goldberg and Taylor Perron/ AGU

Stokes and her colleagues analyzed measurements of water velocity and channel dimensions taken by the U.S. Army Corps of Engineers in 1943 and found that the Casiquiare is eroding faster than the Orinoco, deepening its channel, while the Orinoco’s flow is slowing further due to build-up of sediments in its streambed. The terrain on the Casiquiare side of the divide, which leads to the Amazon, is more than twice as steep as the flat valley the Orinoco runs through below the split.

Because of the steeper course and greater capacity for moving sediment, the new study concluded that eventually the Casiquiare will capture the flow of the Rio Orinoco upstream of the split for the Amazon Basin. When the diversion is complete, the Amazon will have stolen 40,000 square kilometers of the Orinoco’s headwaters, an area about twice as big as Lake Ontario, diminishing the river’s volume significantly. A map of the Amazon basin shows past and ongoing expansion of the basin through river capture. The bold black line traces the present boundary of the Amazon basin. The red line shows the future position of the boundary upon completion of the capture of the upper Rio Orinoco by the Rio Casiquiare. Gray lines show past positions of divides inferred from captures. The rivers plotted in orange are captured reaches; the rivers plotted in magenta are those that lost drainage area.
Credit: Maya Stokes, Samuel Goldberg and Taylor Perron/ AGU

The Casiquiare’s hijacking is not the first time the Amazon has stolen a watershed from the Orinoco. Stokes and her colleagues point to evidence of two previous instances of piracy from the Orinoco. Combined with the redirection through the Rio Casiquiare, the diversions have added 250,000 square kilometers, a drainage area the size of Oregon, to the Amazon River Basin. Other researchers have published evidence of past diversions from the Rio Essequibo into the Amazon Basin.

Stokes said the bigger a river grows, the more power it has to wrest further diversions of water from neighbors. As the volume of water in the Amazon rose, so did the river’s erosive power. Erosion in the headwaters of the Amazon’s tributaries captured more water from neighboring basins, which further swelled and empowered the Amazon in an ongoing cycle.

“We have this huge continental drainage system in the Amazon River and it is continually growing,” Stokes said.

A snapshot of river expansion

Although scientists believe river capture is a normal process, they rarely see it in action. Most examples have been reconstructed from evidence left by events that happened in the past.

The mainstem of the upper Orinoco forks into the Casiquiare on a broad flat floodplain, where the high ground separating it from the Rio Negro basin rises only 3 to 10 meters (10 to 33 feet) above the river at low flow. During annual floods, the river rises about 4 meters (13 feet). The authors believe seasonal flooding breached the divide and through erosion, the Casiquiare branch eventually became a perennial channel.

The process of river capture may be slower in lowlands, like the region where the Casiquiare splits from the Orinoco, than in the mountains, because the low grade allows sediments carried by current to settle and counter losses to erosion, the study suggests.

“Having bifurcations that are stable like this really requires sediment deposition,” Stokes said.