Anticipated declines in human-produced aerosols could have a significant effect on Arctic sea ice cover over the remainder of the 21st century, accounting for up to 40 percent of the decline in sea ice extent that could occur in the region by 2100, a new study shows. This warming and loss of sea ice has been partially offset by human-generated aerosols. Some types of these small, airborne particles reflect solar radiation away from the Earth and cool the climate. But scientists predict the amount of cooling generated by these aerosols will wane as emissions of these particles fall, causing the climate to warm and sea ice to decline. Aerosol concentrations have dropped in recent decades as developed countries have cut emissions, and emissions are expected to decline even further as other countries follow suit.

Although greenhouse gas warming will continue to drive this ice loss, projected reductions in human-generated aerosols could account for up to 1 million square kilometers (400,000 square miles) of the anticipated loss in Arctic sea ice cover, according to the new study accepted for publication in Geophysical Research Letters, a journal of the American Geophysical Union.

A decline in aerosols down to almost pre-industrial levels could result in ice-free Arctic summers more than a decade earlier than if aerosol emissions remained at levels measured in the year 2000, according to the new study.

“The effect of greenhouse gas increases [on Arctic sea ice cover] is still larger than the effect of aerosol decreases, and we shouldn’t lose sight of that fact, but aerosols are expected to play a significant role in future Arctic climate change,” said Nathan Gillett, a research scientist with the Canadian Centre for Climate Modelling and Analysis at Environment Canada in Victoria, and a co-author of the new study.

Gillett said he and his co-authors are not suggesting humans should continue producing large amounts of aerosols to limit the effects of climate change, but rather that the effects of aerosols on sea ice loss should not be overlooked in discussions of aerosol emissions, a conversation usually dominated by the health benefits of limiting aerosols.

The new study showing the impact aerosols have on the climate could help inform policy in this area, said Larry Horowitz, an atmospheric chemist with the National Oceanic and Atmospheric Administration, who was not an author on the study. “The impacts could help [policymakers] make choices about which aerosols to reduce first and how aggressively we reduce [their] emissions in order to improve air quality,” he said.

The new study directly analyzes the effects of changing aerosol emissions on Arctic sea ice cover. Although many different aerosols affect air temperature and sea ice loss, changes in one aerosol, sulfate, will have the largest effect on Arctic sea ice cover over the 21st century, according to the study’s authors.

Sulfate forms from sulfur dioxide, a gas produced by burning coal and diesel fuel. Along with reflecting solar radiation away from the Earth, sulfate particles also start the formation of very small cloud droplets or ice crystals. Clouds with smaller, more numerous droplets are brighter and longer lasting, reflecting more sunlight and increasing the cooling effects of sulfate, said Gillett.

Atmospheric sulfur dioxide concentrations rose after the Industrial Revolution and peaked in the 1970s. Since then, many developed nations have reduced emissions from coal plants and removed sulfur from diesel fuel. These policy changes have led to a 15 percent decline in global sulfur dioxide concentrations, despite an increase in emissions from some Asian countries, according to previous research.

Scientists predict countries that have not yet reduced their sulfur dioxide emissions will place tighter controls on emissions as they become wealthier in the coming decades. Researchers forecast a return to near pre-industrial aerosol levels by the turn of the century. 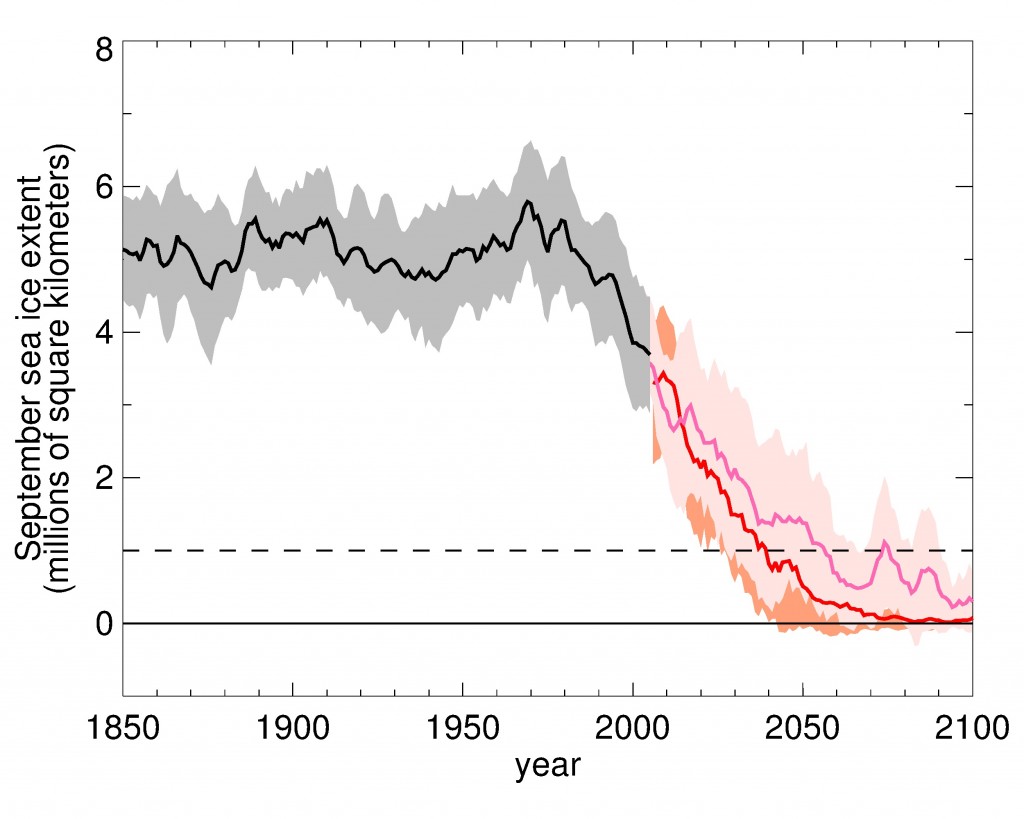 Gillett and his colleagues used a climate model to calculate how man-made and natural greenhouse gases, ozone and aerosol emissions will influence Arctic sea ice cover through the end of the 21st century. The scientists ran the model using a range of emissions scenarios. Each scenario assumes humans add varying amounts of compounds such as carbon dioxide, methane and aerosols to the air in the future.

Projected aerosol emissions differ only slightly among the various emissions scenarios. In all scenarios, declining human-generated aerosols resulted in the loss of about 1 million square kilometers (400,000 square miles) of Arctic ice cover, according to the new study.

The new study finds anticipated declines in aerosol emissions are responsible for 15 percent to 40 percent of the reductions in Arctic sea ice cover that could occur this century depending on the emissions scenario.

Under a moderate emissions scenario, the model predicts Arctic summers will become ice-free by 2045. This scenario assumes sulfate concentrations fall to pre-industrial levels by the end of the century. In comparison, if sulfate and other aerosol emissions were to remain at levels experienced in 2000, the model projects ice-free summers will not occur until around 2060.