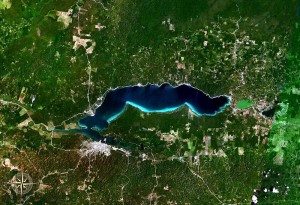 I remember watching The Day After Tomorrow in one of my lab meetings and marveling at how ridiculous the climate scenarios were. Mega-storms sweeping the northern hemisphere in an Arctic Armageddon and tornadoes rampaging through southern California as Los Angeles was consumed in tectonic pyrotechnics. My labmates and I were entertained, but probably not in the way Hollywood intended.

Still, abrupt climate change is a provocative topic. How fast does it happen? How does it shift so quickly? What are the effects of climate swings on life?

It turns out that scientists are still teasing apart the details of if and when abrupt climate change happens. In yesterday’s Emiliani Lecture, session PP41C, David Hodell from the University of Cambridge presented his analysis of lake sediment samples and what they tell us about abrupt climate change during the last ice age, about 10,000-20,000 years ago.

But how do you study ancient climates? Short of building a time machine and packing clothes for warm and cold weather, scientists use proxies–animals, plants and minerals that reflect the climate in which they formed.

He and his colleagues looked at sediment samples from Lake Peten-Itza in northern Guatemala. By taking core samples, Hodell was able to bring up intact columns of sediment filled with layers of tiny fossils, clay, and gypsum.

By knowing that clay is deposited during wetter periods and gypsum is put down in dryer climes, Hodell and his colleagues pieced together when the wetter and dryer periods occurred during the last ice age and how long they lasted. They were also able to collect temperature data by looking at the fossils in their samples.

When combined with proxy data from other lakes in Guatemala, Hodell found that land temperatures during the last ice age were much cooler than what proxies show for sea surface temperatures in the Caribbean and Atlantic.

Their proxy data also resolved an anomaly in an interval of short-lived, extremely cold temperatures in the Lake Peten-Itza region. This cold, dry period was interspersed by an even shorter period of warmer, wetter climate. The clear and abrupt climate shifts seen in lake samples show that climate regimes in this area during the last ice age were dynamic–pinging back and forth from cold and dry to warm and wet.

But even though these rapid swings in climate probably didn’t result in massive cold storms or a gauntlet of tornadoes, it confirms the notion that our climate has the capacity to change dramatically and rapidly.