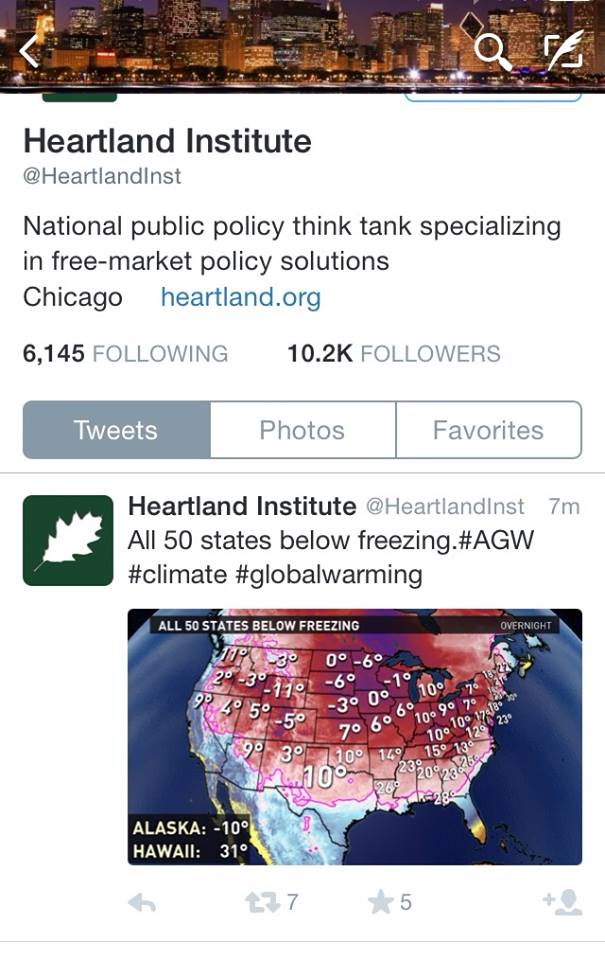 The Heartland Institute long ago proved that they are not among the scientifically literate, but today they posted a real “LMAO fall in the floor laughing” tweet on their twitter account. Let’s talk about just how preposterous this is, and how it shows an absolute total lack of the ability to reason. So, here are 10 reasons why my little dog Riley has greater critical thinking skills than anyone who thinks Heartland’s tweet makes sense.

1. The global temperature is not measured in the Eastern U.S. during one week of November each year. Since the U.S. only makes up about  2% of the globe, that would be patently ridiculous.

2. Here are the global temps. compared to the average from 1981-2010 for the year to date. If you were to compare this year’s temps. to the average temperatures from 1900-1950, the map would be almost totally red. (h/t to Wx Bell which keeps track of theses anomalies on a series of excellent maps.) 3. Ocean temperatures in October were the WARMEST ever recorded. September was also the warmest globally on record.

4.There is a good chance that 2014 will be the warmest year globally ever recorded by instruments, and likely the warmest in several thousand years. 6. August and September were also the hottest on record.  It’s also possible that this Arctic outbreak over the U.S. was climate change related.See Burning Questions on this post from last week. It was written by my friend Bob Henson, at the National Center for Atmospheric Research.

7. EVERY major scientific body on the planet says the IPCC is right about greenhouse gases increasing the Earth’s temperature.

8. Every major science organization on Earth has said the IPCC is correct. That includes the AAAS,AGU,AMS,GSA,NASA,NOAA. If Heartland thinks they’re wrong, then they should gather their facts and publish them in a peer-reviewed journal.

9. Oh, and about your ridiculous claims that climate change stopped in 1998:
From NOAA: “For the ocean, the September global sea surface temperature was 0.66°C (1.19°F) above the 20th century average of 16.2°C (61.1°F), the highest on record for September and also the highest on record for any month”. October is the 357th month to have a temperature greater than the 20th century average! If you’re under 30, then you’ve never experienced a month that was colder than average globally.

10. “Science is what we do to keep from lying to ourselves.” Richard Feynman.

Now, I suspect that Heartland may blame this on an intern, and my response to that is that “my interns are a lot smarter than the ones you hire at your so-called ‘think tank’ “. Others may say this is just food for (the confirmation bias) of their supporters, and to this I say, “Do you really think your supporters have critical thinking skills lower than Homer Simpson?

In the recent past, Heartland has spent quite a bit of money trying to influence broadcast meteorologists with slickly produced material that arrives in the mail. I always get their response to the IPCC reports (popcorn time!), but I can tell you all that money was a waste. I know this, because I heard about Heartland’s silly tweet on a private Facebook page for broadcast mets- along with the words “FACE PALM”. In reality, Heartland’s efforts to influence on-air meteorologists (like myself) have backfired badly.

Here’s a tip Heartland: If you want to bill yourself as a think tank, then try to post something on twitter that doesn’t make every science literate American re-tweet with #ROFL- LMAO.