I’ve written before here about how pervasive the myth is that science is divided about the reality of and the threat of man-made interference with our climate system. It truly is the number one science myth out there. Just by writing this post, I’ll get the usual comments with links to the usual rabid political sites (with unflattering pictures of Al Gore) telling me that thousands of scientists disagree, and that it’s the sun etc. These folks never even pause to think that the sun would be the first thing that scientists looked at! I know this myth is so pervasive, because of the work of the George Mason Center for Climate Change Communication, and the Yale Project on Climate Change Communication. Ed Maibach, and Anthony Leiserowitz have looked at this in-depth for years now. I’ve worked with them in regard to the attitudes of on air weathercasters and broadcast meteorologists. One clue to how broad the consensus is can be seen by noticing who media outlets use for so-called “balance” when they report a climate change story.

Ann Curry (on NBC last weekend) did a very good one hour special on the subject, but for balance did she go to a climate expert who disagrees? Nope, it was a political scientist who made the same accusations that were shown conclusively to be incorrect when he made them before Congress weeks ago.

Maibach and Leiserowitz have a paper just selected for publication in the new AGU open access journal Earth’s Future. It’s well worth a read. I’m sorry if it conflicts with your political world view, but every major science body on the planet agrees with the IPCC reports, and out of thousands of scientists working and publishing peer-reviewed science there are only a tiny handful who disagree. Research has also shown that of those that DO disagree, most have published little on the subject! I know those with no background in atmospheric science may find the peer-reviewed journals a bit hard to follow, but trust me when I tell you that there is overwhelming consensus on the basic fact that we are dangerously interfering with our climate system. 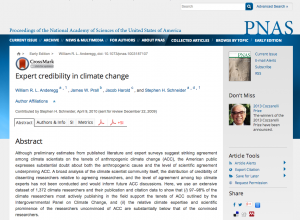 This paper by the late Dr. Stephen Schneider is well worth a read and puts to bed any claim that there is no consensus. Click to read.

So remember, the next time you see a report about climate science on air (or in print), look at the qualifications of the person who disagrees. Most likely it will be someone who has never published a paper about atmospheric science in a peer-reviewed journal. That’s lousy journalism, and the equivalent of doing a story about the Apollo Moon missions, and then giving the chem-trail believer down the street equal time to say the Moon landing was fake, and pro-wrestling is real! (If you don’t know about chemtrails yet- go to YouTube and search. Prepare yourself for some great entertainment! Broadcast mets hear from these folks everyday.)

What we do about climate change is a political question, but the reality of it is a scientific question, and one that’s been answered. While we are on the subject, Showtime’s new documentary on climate change is getting rave reviews, and you can see the first episode online now.