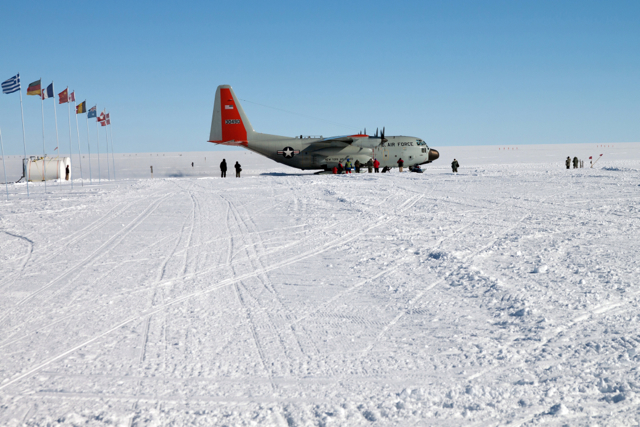 When temps. approach freezing flights to support science on the Greenland ice cap become very difficult. This is my picture from NEEM Ice core site north of Summit in the middle of the ice cap. It took 4 tries to get enough speed to take off the day we left on that LC-130.

The image above is based on data from the Indian Oceansat-2 satellite and shows that on 12 July 2012 virtually all of the Greenland ice sheet surface was melting. The highest point on the ice sheet, Summit at 3,200 meters saw temperatures at 36 degrees! The melt areas can be detected by the albedo of the ice sheet and this can be confirmed by a network of automated surface stations that send data via satellites.

Having spent two weeks at the NEEM ice core site in 2010 I can tell you that it is a usually very cold place. It did reach -3C the day of my departure and the ski equipped  LC130 took 4 tries to get enough speed to take off on the soft snow. I imagine that it would be nearly impossible for any flights to and from Greenland during that week but I hear that temperatures have now dropped back to 21st century summer levels. Automated weather station in Northern Greenland near NEEM. My pic.

Now, imagine you are an expert on Greenland ice, and you write a paper that predicts this very thing might happen within the next decade. Imagine further that the paper has been accepted, and while waiting for it to be published for the rest of the scientific community to read, that the very thing you predicted..HAPPENS!

Meet Dr. Jason Box of the Byrd Polar Research Center at The Ohio State Univ. He co-authored a paper with other well-known experts like Konrad Steffen and the abstract says this: You think you've ridden a snowmobile in the middle of nowhere?? I have you beat ;).

All of this is on Dr. Box’s blog at http://www.meltfactor.org/blog/. The accepted paper is here.

NASA says it was Son Nghiem of the JPL who spotted the sudden melt in the Indian satellite data. He almost couldn’t believe is eyes I hear. At the same time, as all of this is underway, the Arctic Ocean ice is once again flirting with the all time record low. The NSIDC today released an update on the summer melt and if there is not a new record this year, it will certainly rank as one of the biggest melts on record in the Arctic.

The news media and the public want to ascribe one reason for this melt. It is far from being that simple. Can this event be blames on solely on climate change? No, of course not. The ice core record shows this has happened before. It seems to happen about once every 150 years or so, but don’t use that to claim it is not related to climate change. The fact that it’s happened before does not negate the fact that the Arctic has warmed signficantly over the past 100 years. The loss of sea ice is also almost certainly changing weather patterns that will lead to increasingly warm weather on the icecap.

Here is what the paper about to be published says about it:

In the 12 years beginning in 2000, the reduced albedo combined with a significant increase in downward solar irradiance yielded an accumulation area net radiation increase from -0.9 to -0.2Wm^2. Another similar decade may be sufficient to shift the average summer accumulation area radiation budget from negative to positive, resulting in an abrupt ice sheet melt area increase. The ice sheet mass budget deficit is therefore expected to become more sensitive to increasing temperatures via the ice albedo feedback, especially in negative summer NAO index conditions [which did persist in 2012]. Future work should therefore be concerned with understanding potential tipping points in ice sheet melt regime as the average radiation budget shifts from negative (cooling) to positive (heating), as it seems the threshold of this has just been reached. It will take some time, perhaps years for the cold content of the firn to be sufficiently eroded to allow continuous summer melting and an ice sheet surface characterized by 100% melt extent. Further warming would only hasten the amplification of melting that the albedo feedback permits.

I’m beginning to think that the summer of 2012 will be looked back on as the year the public finally understood just what the world’s scientists have been telling them for the past 15-20 years. Our climate is changing, and this is just the beginning unless we get a handle on our carbon emissions. Yes, there are a lot of unknowns, but the basics are well understood, despite the shrill voices of the dwindling minority whose political beliefs make it impossible to except the statements of every major scientific body on the planet.

Note: There are some other very good blog posts on the big Greenland melt. Links below:

MELTFACTOR.ORG (Jason Box’s site where the above paper and quotes are from)