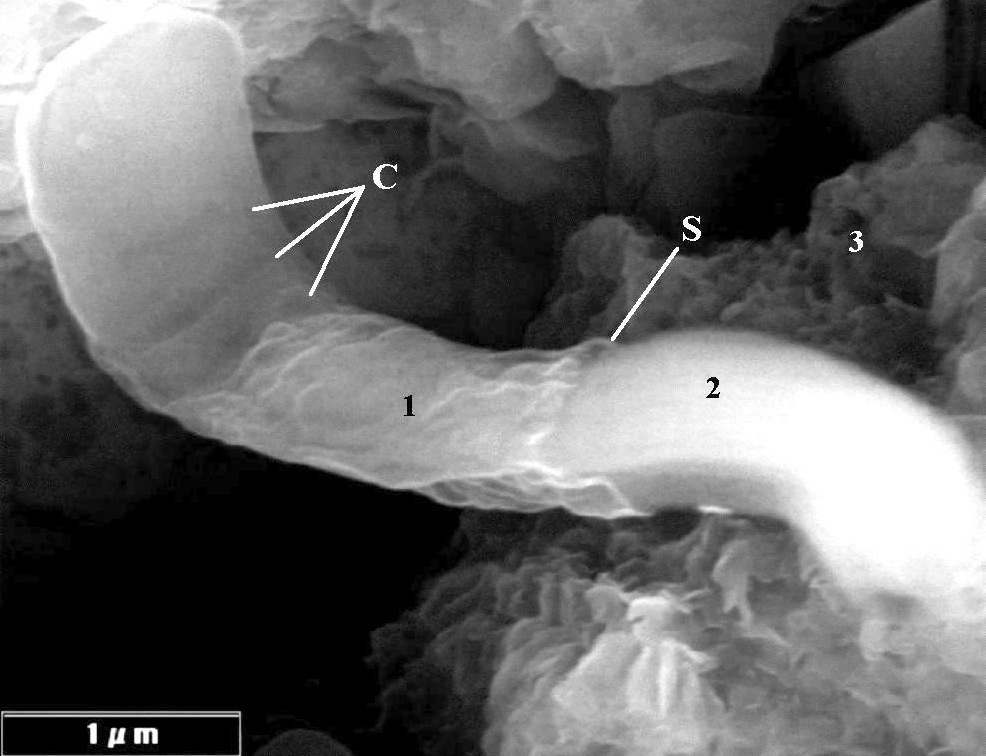 Is this a fossil of an alien titanospirillum velox? Possibly yes!

Dr. Richard Hoover has submitted a paper to the Journal of Cosmology that is about to get the whole world talking!

He looked at slices of three very rare meteorites using Field Emission Scanning Electron Microscopy (FESM–a type of electron microscope) and saw what look like micro-fossils of Cyanobacteria. If these are indeed micro-fossils of bacteria, (as Hoover believes) they almost certainly didn’t come from Earth. (That will be the real question here by the way)

This type of meteorite is extremely rare. It’s called a CI type one. There are only 9 known examples and they have the consistency of a hard clay. Moreover, they are soluble in water. You dump one in a bucket of water and it will dissolve into little pieces. These type 1 carbonaceous chondrites are thought to have come mainly from asteroids and comets.

The three meteorites that Dr. Hoover has looked at are a special type of chondritic meteorite.  Most recovered meteorites are this kind, and have tiny inclusions called chondrules in them. The I in CI stands for Ivuna, which means it has no chondrules (see below for more precise definition). Type one is a special type of these rare space stones.

Wikipedia gives this definition of type one Carbonaceous chondrites:

Type 1 was originally used to designate chondrites that lacked chondrules and contained large amounts of water and carbon. Current usage of type 1 is simply to indicate meteorites that have experienced extensive aqueous alteration, to the point that most of their olivine and pyroxene have been altered to hydrous phases. This alteration took place at temperatures of 50 to 150°C, so type 1 chondrites were warm, but not hot enough to experience thermal metamorphism. The members of the CI group, plus a few highly altered carbonaceous chondrites of other groups, are the only instances of type 1 chondrites.

Here are some basic definitions from Wikipedia, which has an excellent entry on chondritic meteorites. Chondrules in a meteorite. Image from Wikipedia.

So, what is the evidence?

It seems to be pretty good, but the Journal of Cosmology has invited 100 experts and over 5000 scientists to offer their expert interpretation. Those are to be published in a week or so and should be very interesting. They have also made the paper available for Everyone to read.

Now, I’m a meteorologist, and astrobiology is not my field (I know almost nothing about it), but from what I can see in the paper, he seems to be making a pretty good case. It’s not just that the micro-fossils look like a particular type of cyanobacteria, but a special type of structure called a Heterocyst seems to be visible.

The pictures below are from the paper: A real living Earth based living filament of the cyanobacterium Calothrix spp. . Note the wide base called a Heterocyst.

The image below is from the meteorite and the strands are nearly the same size (around 1 micron). Notice the heterocyst at the bottom left. This image is from the meteorite.

Certain enzymes needed by the bacterium will not work in the presence of oxygen and the heterocyst protects it. Sure looks like the same thing, no??

Oh, look at the picture I have at the very top of this post. That was from inside the meteorite, and the image below is of a real living titanospirillum velox. Will the real titanospirillum velox please stand up!

I think I have given enough information for just about anyone who wants to take the time to read the paper and get something out of it. It’s certainly intriguing, but let’s hear from the biologists and other experts. You may remember a similar claim based on a martian meteorite a few years back. It was another NASA astrobiologist who reported microfossils in a meteorite from Mars.

I suspect there is going to be a real give and take over this, and that is how science works. Either a consensus (one way or another) will form, or a general attitude of “it’s not convincing enough–let’s see more data,” will result.

Note: Just noticed that Astronomer Phil Plait has some thoughtful comments on this (and the journal it’s published in) here.

Monday March 7: He has updated comments with some quotes from experts here. In general, Sagan’s quote holds!