A friend sent me this XKCD cartoon today. 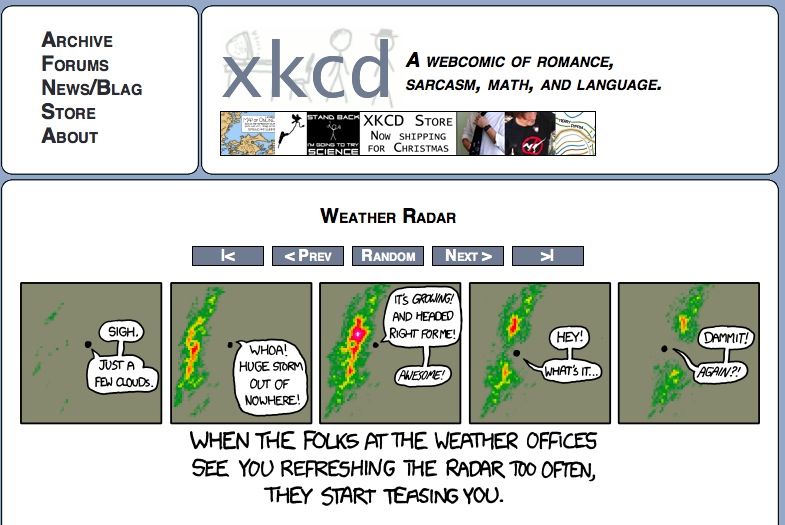 This is actually something meteorologists get asked about all the time! Dozens of people have told me that there is a rainfall hole over their house! I suspect many of you reading this have thought the same thing. As weather radar has become available in real time on the web, this belief has grown markedly. I even found a discussion in a chat room where people are blaming the Gateway Arch in St. Louis on the effect!

It’s not true. It only looks that way. I think this effect is due to a couple of different artifacts of weather radar. First, is the cone of silence.

As storms approach the radar, the level at which the radar beam intersects the line of storms gets lower and lower. Radar on the web is usually from the local NWS Doppler radar (NEXRAD). The image you look at online is made up of several different images from a series of radars. Radar images online the web are usually from the lowest tilt level. The NEXRAD radars make scans at several different heights. Some of these scans shoot over and under the storm. NOAA image.

In meteorology, this is called a composite radar image. The NEXRADS actually spin around at different elevations to get a 3 dimensional view of the entire atmosphere within range. The image you see is the lowest tilt (likely around 0.5 or 0.9 degrees) above the horizon.

A storm that’s 60 miles away will be intersected by the radar beam around 2 kilometres above the ground. In this layer of the storm there is a mix of rain and and slushy ice called graupel.

Water covered ice is a very good reflector of radar energy, and this area of the storm will show up very bright on the radar. As the line of storms gets closer, the beam will be showing the lower regions of the storm, where there is usually just rain. Some of the intense rain aloft in the storm will evaporate and never reach the surface.

The result, a line of intense storms 60 miles away will look less intense as it approaches the radar. Radars are usually near cities and are located near most people. True, the radar will receive a stronger return from echoes that are nearby, but there are algorithms to compensate for this effect. Thus the apparent weakening of the squall line.

There is another peculiarity at work here and that’s the resolution of the radar beam. As the beam goes out it gets not only higher but wider.

If the beam hits a storm cell 120km away it will be nearly 2 km wide! An intense area of rain 1km wide will be mapped to a pixel much larger. As the storm gets closer the resolution gets better and you can see the actual width of the storm cells, and most importantly, the holes between them! A good example is looking at these pictures on the web that are themselves made up of thousands of tiny pictures.

NOAA has a beam calculator that you can use to see this for yourself. Click the image below to take it for a spin. Click image to put in your own numbers. Courtesy NOAA Warning Decisions Branch. The consequences of these two effects cause the misconception that storms are splitting and bypassing you. This is very likely true for the good people of St. Louis as well.

You can easily test the splitting storm hypothesis.

Put a rain gauge in your yard and gather data for a year. Then compare your yearly total with the NWS totals nearby. I’ll bet you they are very close to the same. Some will be higher than you, some will be a little less.

I don’t know if the folks in that message board were serious about the Gateway Arch being responsible for storms splitting around St. Louis. Then again, millions are wearing these magic power bracelets…

Don’t get me started on that again!