Freeze-frame from the featured IAEA video on drought conditions in Cape Town.

Although not all the proposed ideas came to fruition, there was a significant increase in the installation of well points and boreholes for municipal and private use. The national and provincial governments began the investigation and development of three major aquifers in the Western Cape. Unfortunately (or fortunately), the initial estimates for extraction were never realized as a result of poor water quality in the Cape Flats aquifer, power struggles between government parties and typical delays in service delivery in South Africa. In contrast, private groundwater consultants are benefiting from the high demand for groundwater use by residents installing private wells to alleviate the pressures of stringent water restrictions. 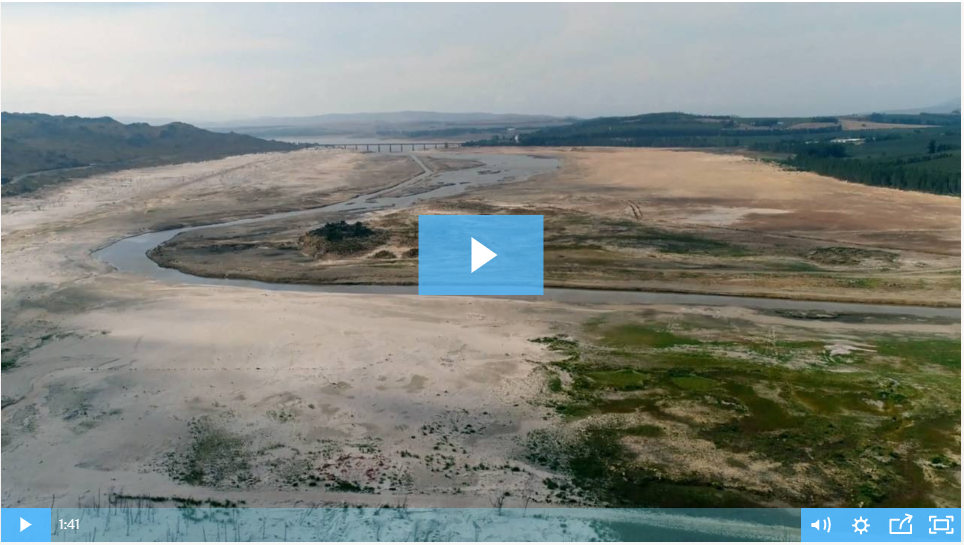 There are now two plausible scenarios for the groundwater use situation in the Western Cape: either we have not yet begun to abstract any significant amounts of groundwater, or we lack the data to show if we have. It is difficult to provide empirical evidence on whether groundwater levels are indeed declining and if it is a result of the drought (or abstraction or both). The trouble is that, unlike surface water storage where we can see the direct evidence of the drought, how much water is in an aquifer cannot be directly observed and must be estimated via an indirect method.

Estimating changes in groundwater availability usually requires detailed baseline data to be available, meaning that the state of a resource is relative to the baseline data available and can be over/underestimated as a result. One example of this was the subject of a controversial string of news articles released in the first months of 2019.

The Department of Water Affairs (DWS) released an interactive map of monitoring boreholes across South Africa which includes a record of normalized water levels (0% being the lowest measured water level in meters above sea level (masl) and 100% the highest measured water level) averaged over a province (Figure 1) . The graph shows a decline in average water levels in the last three years, but the record only goes back to 2009 and it is difficult to say if this a drought signal, a result of abstraction, or simply a natural fluctuation over a longer timescale.

Respected researcher and geochemist Dr. Meris Mills investigated historical data from the national groundwater archive and found that much of the data before 2015 were too sparse to be considered representative of the groundwater level. Data density and availability still is a major limiting factor in groundwater studies in South Africa.

It is still difficult to quantify how much groundwater contributed to the recovery of Cape Town’s dam levels, if at all, but the resultant interest in long term groundwater supply has sparked debate surrounding local groundwater resources.

It is also clear that the effects of the drought on groundwater resources remain to be fully realized, however our groundwater, in general, is more resilient to change than we may think. Depending on the angle you look at it, initial findings may either indicate that groundwater is potentially a lifeline to cities crippled by a water supply crisis, or a time bomb with a delayed fuse.